“Plant-based eating is one of the biggest trends in the world and ice cream lovers everywhere have shouted for non-dairy/vegan options that rise to the levels of Ben & Jerry’s euphoric awesomeness,” CEO Matthew McCarthy said in a statement.

The global dairy-free ice cream market may reach $1.2 billion by 2025, according to a Grand View Research report. Factors driving the demand include increased concern over “health issues due to lactose present in milk.” SPINS data shows that U.S. sales of vegan ice cream and frozen novelty desserts reached $304,145,000 last year. This represents a 66.7 percent increase from April 2017 to April 2019.

Vegan ice cream is beginning to take up more space in the freezer aisle. Longstanding brand So Delicious, which was acquired by dairy giant Danone North America in 2016, has a lineup of flavors made from soy, coconuts, cashews, and oats. Dairy-free brands, like Austin-based NadaMoo! is available in more than 8,000 retailers nationwide. Artisan Brooklyn-based brand Van Leeuwen’s new range of oat milk ice cream is expected to hit retailer shelves this year.

Ben & Jerry’s first launched four almond milk-based vegan ice cream in 2016. With its recent launch—including the recent Netflix & Chilll’d—the company now offers 17 ice cream flavors, accounting for 25 percent of its lineup. The company recently dropped the claim that its milk comes from “happy cows” in response to a lawsuit.

The Vermont-based ice cream maker is also expanding its vegan range with single-serving mini cups in the flavors P.B. & Cookies and Caramel Chocolate Chunk. The mini cups, along with the three new sunflower butter flavors, are now available in stores nationwide. 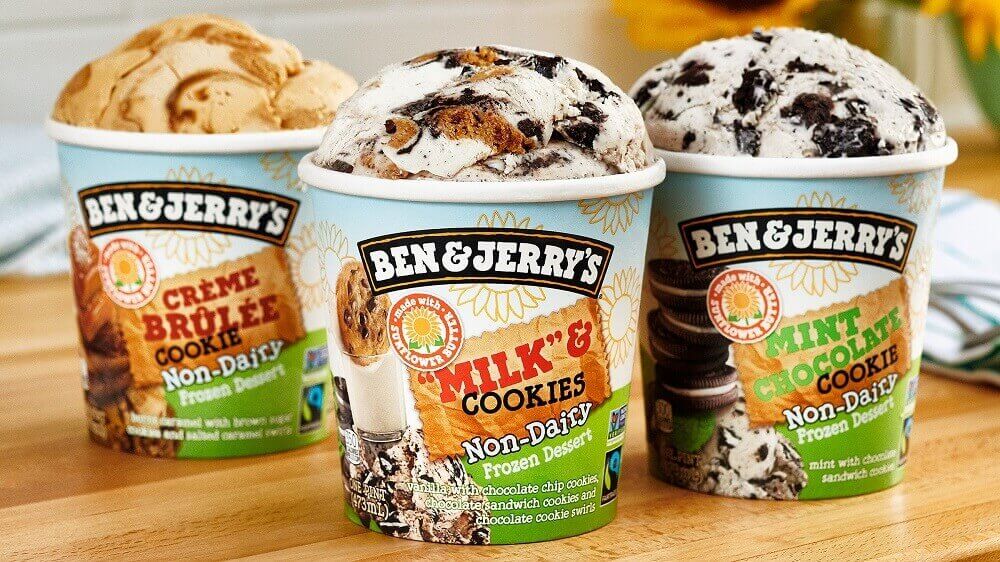