There are two “new” vegan options at Costco’s deli section. California-based food brand Don Lee Farms, makers of the Organic Plant Based Burger, has announced that two of its long-standing products are now completely plant-based.

The two products, Organic Veggie Burgers and Organic Veggie Bites, will replace Don Lee Farms’ vegetarian items in the Costco fresh deli section. Both options are made from sweet potato, sunflower seeds, and veggies. According to the company, the meatless burgers are certified organic and free from artificial ingredients.

“We introduced our first fresh veggie burger in 2005. The success we have had since hasn’t led us to be complacent,” Donald Goodman, president at Don Lee Farms, said in a statement. “We push forward with continuous innovation in all categories we sell in and have a determined focus to continue our lead in the organic plant-based space.” 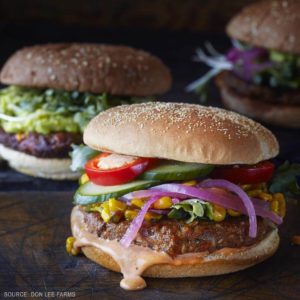 “We strive to make foods that are downright tasty, nutritious and easy to prepare at home. When we do all of those things right in development, we know that we have an exciting new item to tell people about. We knew we were ready with this launch when our plant-based formulas handily beat out our vegetarian ones in every blind cutting we performed,” Goodman continued.

The family-owned Don Lee Farms specializes in both plant-based and traditional meat products, but found success with the launch of its Organic Plant Based Burger last summer. Made to look, taste, and “bleed” like traditional beef in the same vein as the Beyond Burger, one million patties sold within the first 60 days. Since then, its distribution expanded to Wegman’s, HEB, and Amazon Fresh.

Data from leading market firm Mintel shows that 58 percent Americans are making conscious decisions to choose more meatless meat as part of their health goals — a trend that researchers expect to grow. “With more protein-rich options, we expect to see consumers continue to turn to non-meat options for their protein nutrients, especially if they are cheaper and more accessible,” said Gina Cavato, lifestyles and leisure analyst at Mintel.

Earlier this year, Don Lee Farms announced its realistic vegan burger will soon launch in other chains across the nation including Kroger, Publix, and Giant Martins as well as 15 countries in the EU, South America, and the Caribbean.