By Jill Ettinger
A new Vegan Chinese pop-up restaurant, Mao Chow, is open for business inside the Pamela cocktail bar in London for a residency until at least 2019.The new vegan restaurant will bring a signature menu of what it calls “completely inauthentic Chinese food,” featuring dishes including Sweet Silken Tofu smoked with kumquat, ginger syrup, and viola flowers; Dan Dan Noodles with ground “pork”, half “egg”, and pak choi; “Pork” and chive dumplings; a smoked “beef” jerky fried rice with celery, brussels sprouts, and fresh herbs; and a cumin spiced “lamb” burger with xian pickles and coriander. Diners can also order specialty drinks from Pamela. 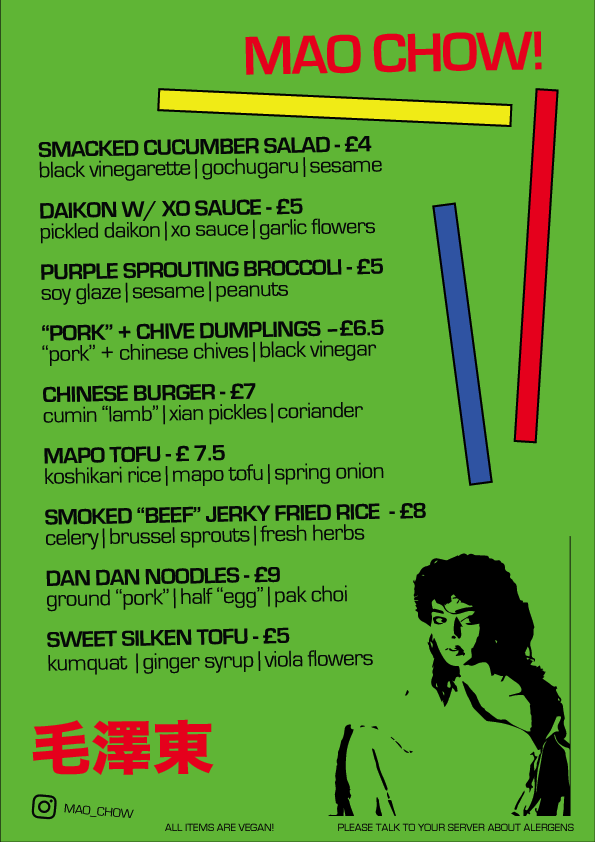 Mao Chow’s take on Chinese food builds on the growing plant-based dining trend in London and across the globe. Chinese food is typically vegetable-forward but Western tastes have pushed many outfits to offer more meat-based dishes in recent years. While Mao Chow takes a traditionally Western approach to Chinese food with rich sauces and spices, the menu is also simple — only nine items with some as simple as daikon radish with sauce or a simple cucumber salad.

“YO LONDON! We are very excited to announce that we will be in residence at @drinksatpamela starting on January 9th Tuesday – Saturday. Come bathe in chili oil and buy me a shot,” Mao Chow noted on its Instagram feed earlier this month.