A new vegan restaurant is coming to Minneapolis, following a successful Kickstarter campaign that exceeded its initial funding goal. Trio Plant-Based is now in the stage of securing a brick-and-mortar location within the city, becoming Minneapolis’ first plant-based restaurant owned by people of color. What’s more, the trio of owners are hoping to provide more than just a safe space for vegans within the city; they have made it their mission to capitalize on their new business to create jobs, feed the hungry, and promote positive social change.

The concept of Trio began years ago when part-owner Sarah Woodcock went vegan. She explained on the Kickstarter page, “I became vegan because I care about animals yet I love the fact that a plant-based diet also has benefits for human health and the environment.” She added, “One thing I’ve learned is that while being vegan is integral to social change, it’s only part of the solution.”

Woodcock and her husband, Dan, worked to recreate outstanding plant-based recipes at home for the past six years, but their social activism extends far beyond the kitchen. The two have actively supported the Black Lives Matter movement, and in 2016, they successfully helped their now-business partner, Louis Hunter, avoid the false accusation of rioting and 20 years in prison. Although the charges against Hunter had been dropped thanks to the Woodcock’s advocacy, he had lost his home and his car due to the original accusations. He also had four daughters to take care of. The Woodcocks befriended Hunter during this tough time, and eventually, the trio came up with the idea to open a plant-based restaurant. Sarah told City Pages, “As our friendship grew, we really wanted to use whatever skills or opportunities we might have access to to really help Louis rebuild his life.” She continued, “Could this [restaurant] be a catalyst for something really great in Louis’s life? Could we make this difficult situation into something that really turns the tide and makes a difference?”

To fund their dream, they launched a Kickstarter campaign with a goal to raise $50,000. By the end of the campaign, they had 600 backers and $62,674. Trio is shaping up to be more than a dream; it is a reality. 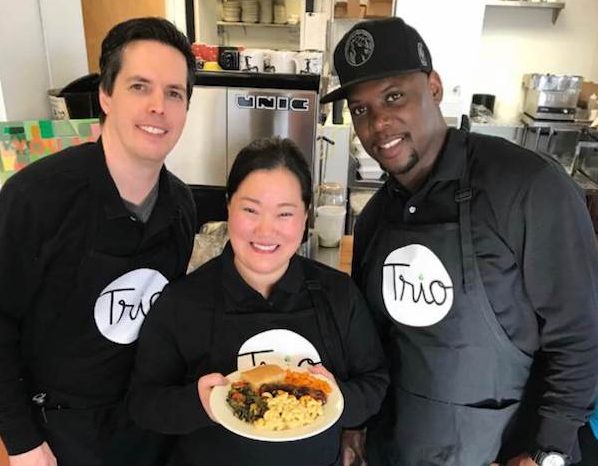 Trio will be more than just a place to grab a hot meal. “We have put our hearts and souls into our food,” the team wrote, “along with our love for justice and our love for the community.” The team guaranteed that “everyone, regardless of race, color, sexual orientation, gender, religion, disability, or income will have a seat at the table.” The restaurant will also strive to employ those undergoing “challenging circumstances” in order to “become a catalyst for greater social change,” according to Sarah.

To stay up to date on Trio’s location and future opening, visit the Kickstarter page. In the meantime, Twin Cities residents can enjoy the growing number of vegan and vegan-friendly spots in the city, such as the Herbivorous Butcher and Truce.