There’s a new vegan hot dog on the scene that tastes so good it’s confusing meat-eaters.

Food tech company Moving Mountains just launched a “mind-blowingly meaty, meatless hot dog,” that according to a press release, is the world’s first footlong vegan hot dog that looks and tastes like meat.

Moving Mountains used food technology, scientific processes, specialized machines, and local natural ingredients to bring the product to life. The company tested “countless” recipes over the last 12 months before discovering the one that makes it “identical to its pork counterpart” in terms of taste, texture, and smell.

“It will fool even the most committed carnivores and convince them that a pig isn’t needed to make a dog,” the press release says.

The Moving Mountains Hot Dog is made mostly of sunflower seeds and is larger than the average hot dog, being 3cm wide and 10 inches long – four inches longer than a regular pork hot dog. Sunflower seeds are rich in B complex vitamins, phosphorus, magnesium, iron, calcium, potassium, vitamin E, and protein. Carrots are included in the recipe to give the meat the coloring of a hot dog. Onion provides a “satisfyingly firm and bouncy texture,” and paprika – which is rich in antioxidants – offers a “punch” of flavor.

The food tech company uses coconut oil to give the meat a juicy consistency. It also helps maintain the structure of the hot dog. The company points out that unlike the saturated fats found in pork hot dogs, coconut oil contains no trans fats or cholesterol. It’s also rich in antioxidants and provides a boost of energy. 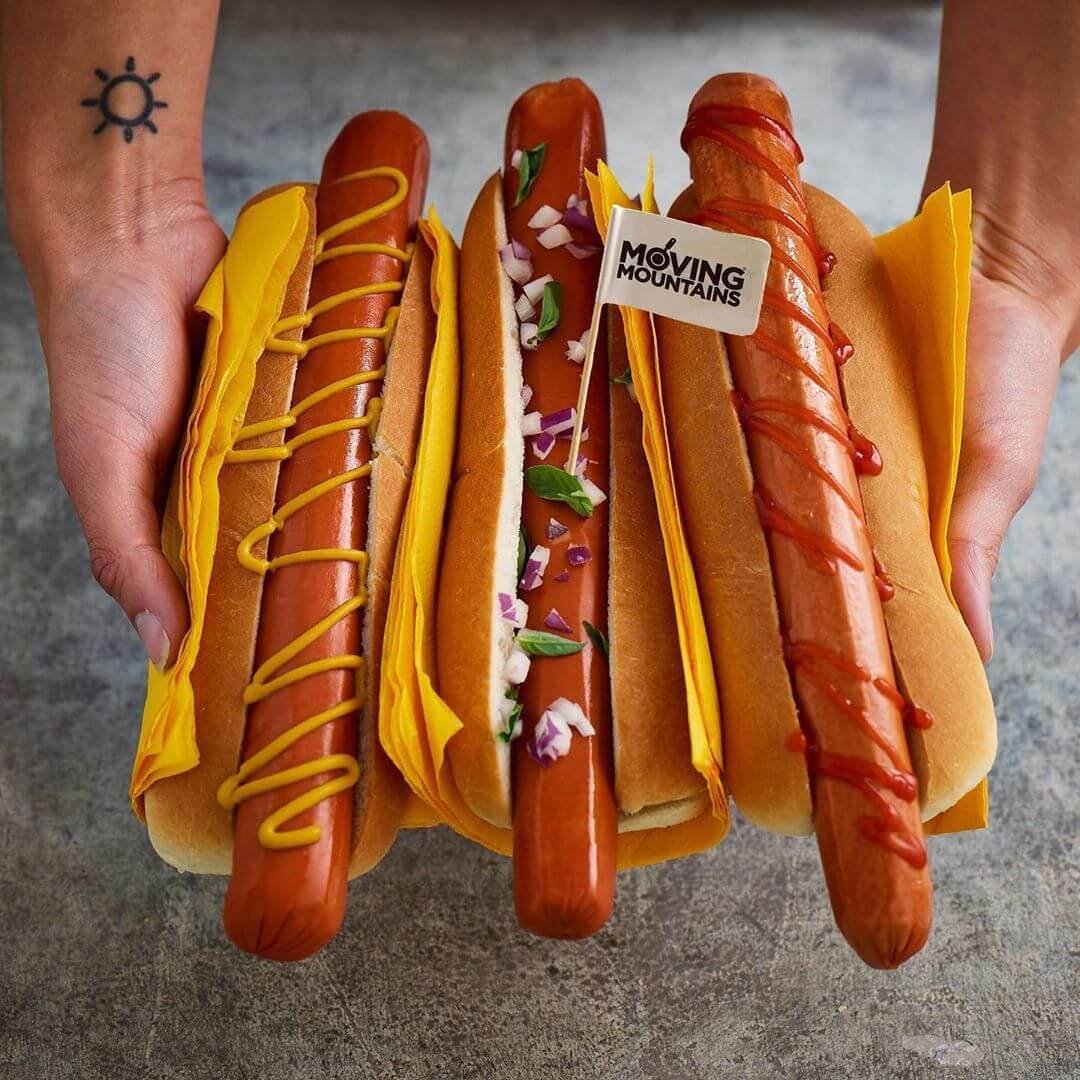 The vegan meat is made with sunflower seeds | image: Moving Mountains/Instagram

Moving Mountains, which is also behind the UK’s first meat-free “bleeding” burger, teamed up with nonprofit vegan institution Unity Diner for the launch earlier this month.

The vegan hot dog is being served up in a warm bun with caramelized onion, mustard, and ketchup at Unity Diner in London. The eatery donates all of its profits toward animal rights organization Surge and toward the development of a new animal rescue sanctuary just outside of London. Simeon Van der Molen, the founder of Moving Mountains, said in a statement that Unity Diner is the “perfect fit” for the food tech company as it “gives us another chance to support animal rights and help make a difference to the world.”

He adds that the vegan meat is a “more sustainable food option for our health and the health of the planet.”

The company plans to introduce the product to supermarkets later this year, offering the plant-based hot dog in various sizes and flavors to allow “more people to bite into the future of food.”

The Moving Mountains Hot Dog is available at Unity Diner in London for £12.