A new plant-based pizza joint just opened in Pasadena, Calif., but it may not be long until it reaches your hometown. The Pizza Plant is a new concept designed to promote the plant-based movement and support local communities through the healing power of food. And what is more communal than pizza?

The idea first evolved in 2017 when the concept’s founder, Marvin V Acuna, became inspired. As a dedicated follower of the plant-based lifestyle and a self-proclaimed foodie, he realized that despite the abundance and innovation of vegan food, he still had not found that perfect organic plant-based pizza. He recalled a very distinct memory from his childhood — family pizza night — and said that “the memory kept haunting me.” Acuna decided to run with it, but he ultimately had a far more ambitious goal than simply serving pizza.

“My vision was to build a pizza company that would embody all the things that are important to me,” Acuna explained. His healthy lifestyle, a strong sense of community, a love of food, and a desire to support those in need all became key elements in Acuna’s business plan.

The inaugural The Pizza Plant location in Pasadena, which just opened this week, has partnered with Union Station Homeless Services, a nonprofit organization that has been helping homeless adults and families rebuild their lives for 45 years. The nonprofit provides street outreach, shelter, housing, and resources to help these people regain their independence. For every pizza sold, one custom-sized individual pizza is donated to Union Station Homeless Services. The eatery is further tied to its Los Angeles community by the artwork printed on its to-go boxes. Each box is, quite literally, a piece of art. The white, black, and blue heart design was created by local artist Martin Vogel, who paints using the wheels of his wheelchair. 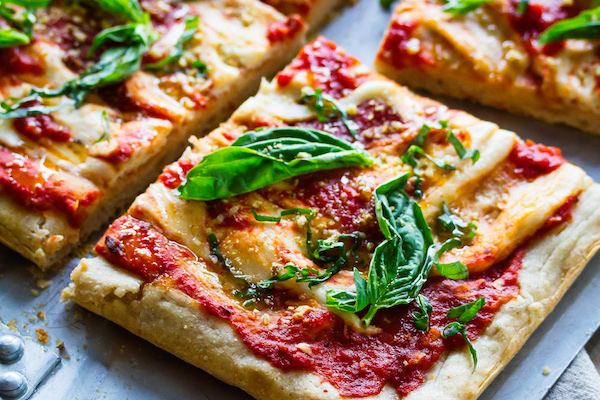 The Pizza Plant officially opened its doors to the Pasadena community on Saturday, June 9, in conjunction with the 100th-anniversary block party celebration of the Pasadena Playhouse, another iconic community establishment. Block party attendees crossed the street to The Pizza Plant, where Acuna and several vegan models handed out free slices of pizza. The storefront was packed, and the reactions were overwhelmingly positive – even the omnivores were impressed by the plant-based slices.

Acuna said, “We’re committed to the idea of making great pizza. The fact that its plant-based is a bonus.” He said that the goal is not to “convert” anyone; his main focus is the “underserved plant-based community,” which includes those who are lactose intolerant. However, he believes that by providing exceptional pizza and using completely organic ingredients, even those who do not adhere to a plant-based diet may become fans. The Pizza Plant allows people to enjoy a healthier and “cleaner” pizza more often, without the belly bloat or guilt often associated with traditional slices.

Rachel Carr is the chef behind the crave-worthy menu. Acuna was familiar with her work in the plant-based culinary space and sought her out to help him with this project. “She’s just the right person. She’s incredibly gifted as a chef and has a great mind for business. She has both the artistic creativity and business savvy, which is rare to find,” he noted. Carr is well known in the Los Angeles vegan community for her culinary talents. She began her career running a raw food cafe, Cru, then moved on to other ventures including Six Main (Conn.), Chavela, By Chloe, and the Wanderlust Cafe. She also regularly posts recipes on her blog, Plant Craft. 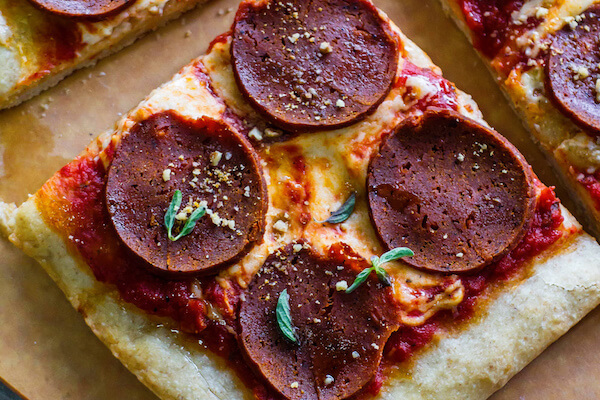 Carr and Acuna developed a truly unique and completely enticing pizza menu, making every single ingredient in-house, from the vegan sausage to the crusts to the medley of plant-based cheeses. With eight different pizzas to choose from, in addition to a create-your-own, the menu offers something for everyone. For example, the Green Goddess features roasted broccoli, asparagus, pumpkin seed pesto, Plant Craft cashew mozzarella & ricotta, avocado, sprouts, and basil. The Thick & Spicy Buffalo pays homage to buffalo wings with buffalo cauliflower, spicy buffalo sauce, ranch, shaved raw celery and carrots, Plant Craft pecan parmesan and cashew mozzarella. However, Acuna’s favorite (at the time of the interview – it changes) is the Half-Baked, a truly decadent edible masterpiece. The fluffy crust is piled with house-made vegan sausage, Plant Craft nacho cheese, black beans, chipotle salsa, Plant Craft sour cream, shredded cabbage, avocado, cilantro, cherry tomato, hemp seeds, jalapeño, and finished with CBD oil. You certainly won’t find that at your generic pizza chain, at least, not until The Pizza Plant comes to your area.

“My co-founder Ravi Choudhry, a successful Real Estate developer/investor, and I have a very bold and audacious plan,” Acuna stated. The team is working to scale this concept across the US, committing to 1,000 stores in the next few years. Each location will partner with a local non-profit to continue the company’s mission to support communities. Further, the artwork on the boxes will also reflect a local artist’s work.

For updates on The Pizza Plant’s expansion, or to learn more about the company, visit the concept’s website.