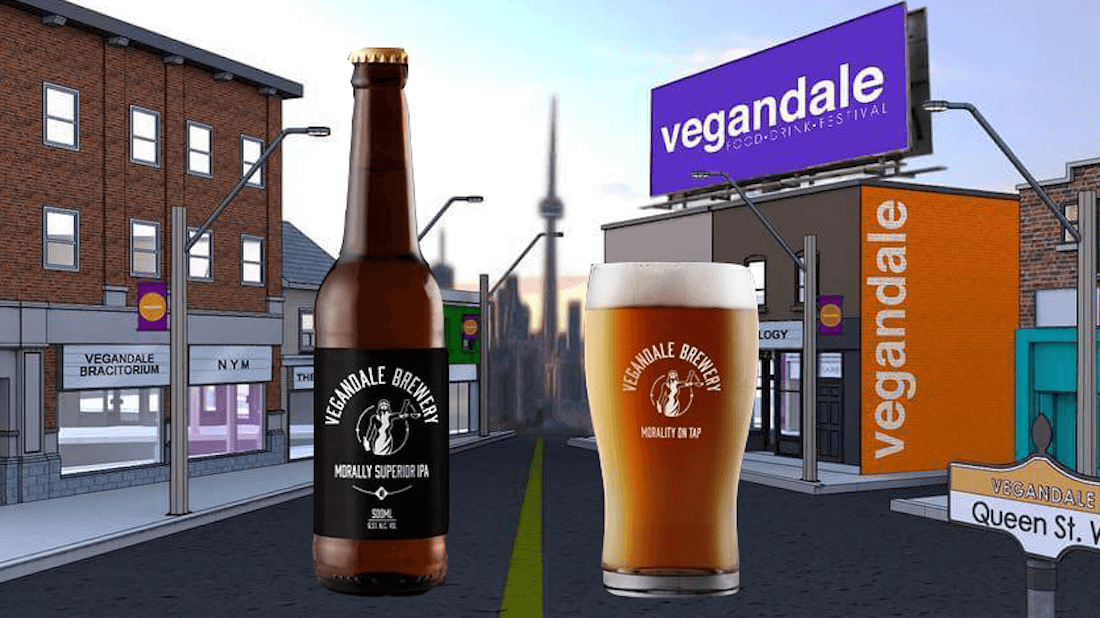 Toronto’s first-ever vegan brewery and restaurant is coming to the Parkdale neighborhood, also known as “Vegandale” by the locals. The Vegandale Brewery will join the other plant-based businesses on this up-and-coming vegan-friendly block.

The new brewery is a collaborative effort from online lifestyle and entertainment brand management company The 5700 Inc. and Mill Street Brewery co-founder Michael Duggan. The 5700 Inc. is also responsible for the launch of North America’s fastest-growing food and drink festival, Vegandale Food Drink Festival, as well as the vegan businesses Doomie’s Toronto, Mythology Diner, and the cruelty-free fashion store, The Imperative.

“We’re ready to show Toronto that our strong brews match our strong convictions,” said The 5700 Inc. owner Hellenic Vincent De Paul to local news site, the Daily Hive. “And with four additional vegan storefronts launching this summer under the Vegandale brand, we have lots of reasons to toast to the end of animal exploitation.”

At Vegandale Brewery, where the shop motto is“Morality On Tap,” patrons can expect to find a plant-based menu featuring “beer-friendly” comfort food. Duggan will brew small-batch beverages in-house, including popular Mill Street Brewery selections such as the Principled Pilsner, See the Light Lager, The Sour Truth, and Morally Superior IPA. The roomy vegan brewpub will provide seating for up to 100 customers to eat, drink, and enjoy like-minded company.

The 5700 Inc. has been working hard to transform the Parkdale neighboorhood into the Vegandale it is today. Last March, the group announced their intentions to build this vegan-friendly community, calling it a “mecca for the ethically minded and hungry, with the best of vegan food, goods, and services co-existing on one city block.” At the time of the announcement, The 5700 Inc. named three upcoming restaurants –  Vegandale Bracitorium, Prohibition Pie, and NYM – along with an unnamed project, which was likely Vegandale Brewery.

In addition to the brewery, The 5700 Inc. will offer a separate retail store that will sell beer and merchandise. The team expects to open Vegandale Brewery and the retail shop later this summer. The other three Parkdale vegan restaurants in the Vegandale project are also expected to open this season.