Lavva, a Hudson Valley, New York-based vegan yogurt company, is stirring up the non-dairy yogurt aisle with its new line of yogurts. Launched earlier this year, Lavva is not your typical soy, coconut, or even flax-based brand. The company has created a truly unique plant-based product made with pili nuts for a creamy, nutrient-rich, and dairy-free yogurt.

Liz Fisher, Lavva’s founder, discovered the pili nut while researching foods to help combat her cancer and restore her health. The nut is native to Southeast Asia and not easy to find in the U.S. Fisher found that pili nuts are packed with essential nutrients, including vitamin E and magnesium, and contains all the amino acids for protein building. What’s more, it makes for a great yogurt in terms of texture. She said in a press release, “When I started to play around with the nut, I found it whips up into a buttercream consistency.” Fisher worked on her vegan yogurt recipe for two years before debuting on market shelves in early 2018.

In addition to the pili nut, Lavva yogurts incorporate a blend of other non-traditional yet health-promoting ingredients. The nuts are blended with plantains, coconut, cassava, and fruit to create a clean product that satisfies like yogurt without adding gums or sugars. The final product is dairy, soy, and gluten-free, and also totes 50 billion live probiotics, prebiotics, and healthy plant-based fats. 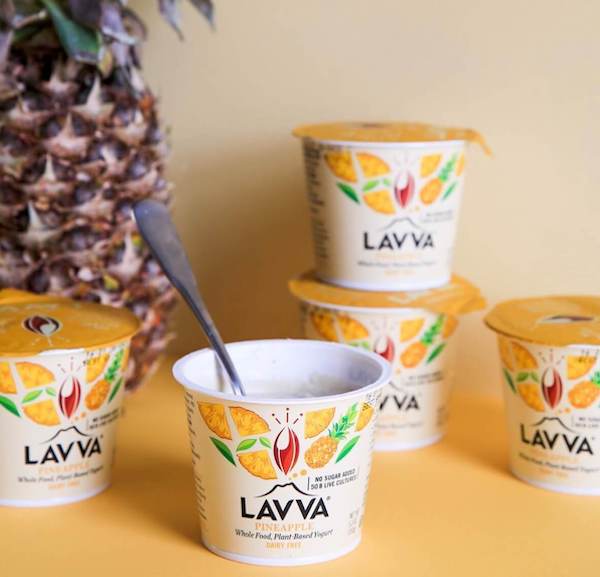 Vegan yogurt is becoming more popular with consumers as companies continue to innovate and improve upon their products, creating plant-based yogurts that truly replicate their dairy-based counterparts. One report, generated by Future Market Insights, predicted the non-dairy yogurt market to reach a $7.4 million value by 2027. Vegan companies are benefiting from this rise in consumer interest, expanding their distribution and offerings. Earlier this year, the popular UK brand, Coconut Collaborative, launched its coconut-based yogurts in select stores in the U.S. Plant-based milk brands, such as Ripple, Califia, and Good Karma Foods, have also extended their product lines to create their own brand of vegan yogurts.

Lavva lavors include Original, Blueberry, Strawberry, Pineapple, and Raspberry, and can be found nationwide at select Whole Foods Markets, Wegmans, and Stop & Shops.