New York-based charity Chilis on Wheels is working to bring vegan meals to homeless people and families in need living in Brooklyn.

Brooklyn Borough President Eric Adams has loaned the group a working space in Brooklyn Borough Hall. Chilis on Wheels is using the space to store and pack groceries and other donated goods.

In addition to serving the homeless communities, the charity has voiced its support of the Black Lives Matter movement. It partnered with BLM Greater NY to bring plant-based groceries to families living in the Bronx.

Chilis on Wheels has also helped serve those in need during the coronavirus pandemic. It teamed up with Support and Feed, an initiative founded by Maggie Baird, singer Billie Eilish’s mom, that supplies vegan food to frontline workers.

“We’re super grateful to Support and Feed for all the hot meals that they’re giving us. They’re going to be going, along with our grocery deliveries, to families,” Chilis on Wheels’ founded Michelle Carrera said in a video posted to Instagram.

“Right now, families are really struggling with food, having been unemployed for so long. Unemployment benefits aren’t coming in, so healthy food is really in need right now,” she added.

Carrera founded Chilis on Wheels in 2014. At the time, she and her four-year-old son were looking to volunteer at a vegan soup kitchen in New York City for Thanksgiving. However, they were unable to find one.

Instead, Carrera and her son made vegan chili and distributed it to those in need on the street. It was then that Chilis on Wheels was born. The volunteer-run charity now works to help bring healthy, plant-based foods to vulnerable communities.

“Chilis on Wheels started organically and continues to grow that way,” Carrera told LIVEKINDLY in an email. 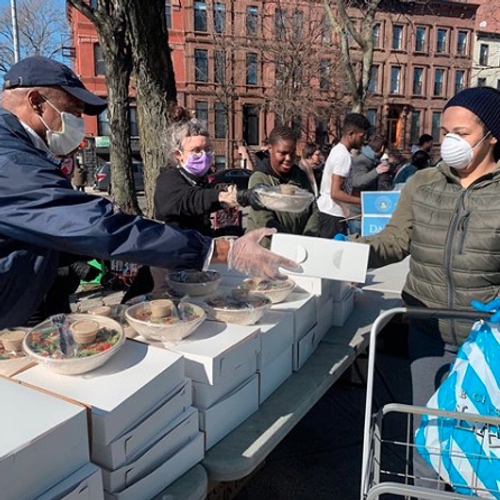 Brooklyn Borough President Adams helped give out free vegan meals to those in need. | @BPEricAdams

In March, the Brooklyn government, animal rights organization Mercy for Animals (MFA), and the hunger-relief charity Community Solidarity helped give out plant-based meals to food-insecure Brooklynites.

The new partnership, called “Plants to the People,” was organized by MFA and Community Solidarity.

BP Adams personally helped hand out the free vegan meals, which were distributed to firefighters, police officers, hospital workers, and other frontline workers at the Maimonides Medical Center.

MFA purchased the meals from vegan establishments in Brooklyn and Manhattan.