From cheese, pizza, to mock meats (i.e. plant based meats), to non-dairy ice cream, this encyclopedia offers options for people’s favorite foods. The encyclopedia lists places to get such vegan foods and also offers other cultural and social notes about many of the vegan foods on the list. It also introduces folks to vegan favorites like seitan, a particularly popular plant based food.

What looks like a standard Everything bagel with lox and cream cheese isn’t. At @orchardgrocer, their vegan version of the classic features “lox” that consists of brined-and-smoked carrot slices, atop a cashew cream cheese. The strictly vegan grocery store is one of the many New York City sources for vegan food we’ve highlighted in our comprehensive encyclopedia on eating vegan in New York. At the link in our bio: read our full A to V guide to veganism’s recent culinary breakthroughs. ?: #BobbyDoherty

There are also lesser known things in the encyclopedia, like Liquid Smoke, which is the captured vapors of burning wood. These vapors can then be used to quickly flavor food — like plant based meats, for example. They also include things that are not necessarily food, like Happycow.net, an inclusive, crowdsourced database of vegan restaurants from across the globe. 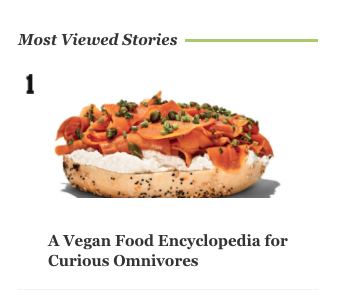 At the date of writing, the article was trending number one as the most viewed story on the site. The article also appears in the November 13, 2017, issue of New York Magazine so grab yourself a copy if you want a vegan encyclopedia of your own.