For Matt de Gruyter, co-founder and CEO of the nation’s first vegan and organic burger chain, Next Level Burger, the future of food all starts inside a sprouted whole grain bun.

De Gruyter started the chain with his wife Cierra partly out of desperation for clean food, but also out of a “real desire” to feed people “awesome and healthy food.”

“The premise of  Next Level Burger is a reflection of the way my family eats,” he told LIVEKINDY in a recent interview.

With two young children and a concern about their food options, the husband-and-wife team set out to prove that healthy food could be delicious food — and, they thought: what better place to start than the burger?

This week, the west coast chain opens its first east coast location, inside the new 365 by Whole Foods Market in Brooklyn. It’s part of its massive expansion plans — de Gruyter says the goal from the beginning was “in the first ten years we go from one to 1,000 restaurants; to grow aggressively and wisely.” 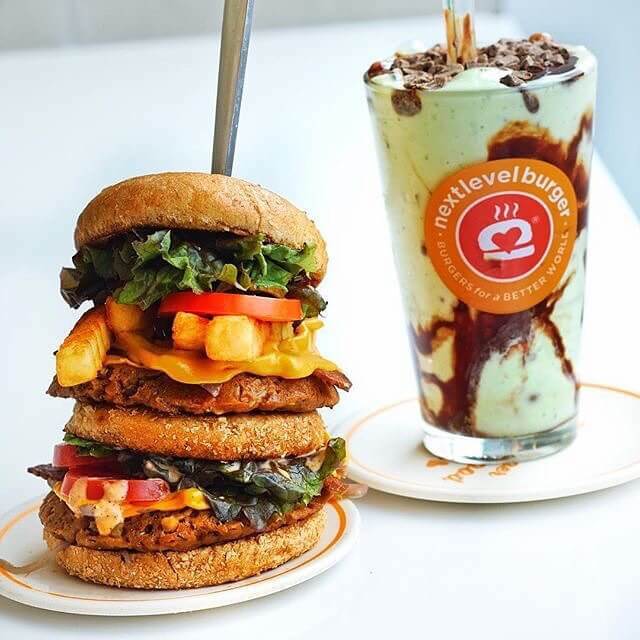 The first Next Level Burger restaurant opened in Bend, Oregon, in 2014 — years before Beyond Meat and Impossible Burger made vegan burgers the darlings of the meatless movement. With made-from-scratch burgers like its signature Umami Mushroom and Quinoa Patty, Next Level Burger also sells Beyond Burger patties, vegan hot dogs, salads, sandwiches, and shakes. Like Beyond Meat, Next Level Burger wants to break the stereotype that vegan food isn’t tasty enough or meaty enough for committed meat eaters.

It seems to be working with expansion throughout Oregon, Washington, California, and now New York. Now, de Gruyter says the goal is to put a Next Level Burger everywhere they get requests, “and we get a lot of requests,” he says.

With a commitment to non-GMO and often organic ingredients, made-from-scratch recipes, and a family-friendly environment, the company caters to Millennials and forward-thinking consumers who want food that tastes as good as it is healthy. Not just healthy for their bodies, but for the planet and the animals. Transparency in fast-food isn’t a new concept. Subway feigned it and Chipotle platformed on it. But neither made the leap quite in this way: committing to truly clean and ethical ingredients and sustainable business practices like biodegradable packaging, and reclaimed wood tables in the restaurants. There’s an urgency to keep moving things forward, to help people be the best they can be and transform the food system from the inside out. And it all starts with what people put in their bodies.

In some ways, the burger is an apt metaphor for what Next Level Burger is attempting: a very well-crafted, satisfying, and compact delivery system for good things. “The food chain should be revolutionized,” says de Gruyter.

“The whole wide world deserves better food,” he says. “I wake up every day with the awareness of how much work we have to do.”