The footwear giant’s new vegan sneaker is made in collaboration with clothing brand Maharishi in celebration of its flagship store opening in New York City’s Tribeca neighborhood this week. 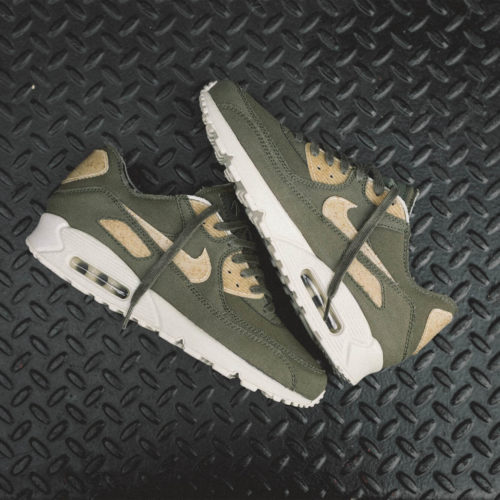 The Maharishi x Nike Air Max 90 is made from sustainable vegan materials.

The Maharishi x Nike Air Max 90 features an organic cotton upper in one color — Maharishi’s signature “maha Olive” — dyed naturally with pomegranate and turmeric. The outsoles are made from Nike Grind, a material created from recycled athletic footwear and manufacturing scraps. Nike’s signature checkmark logo as well as other details on the shoe feature sawdust made by grinding down shipping palettes for a woodgrain effect.

The sustainable fashion label made an impact in the 1990s, favored by celebrities like Jennifer Aniston, Brad Pitt, and Victoria Beckham. Its aesthetic combines utility clothes (Blechman worked in the army surplus trade prior to founding the brand) and Japanese aesthetic. Maharishi is largely credited with bringing functional military style to high fashion — think cargo pants, camo patterns, and the brand’s signature olive color.

Demand for vegan shoes is on the rise as more consumers opt for leather-free leathers. But Nike has been slow on the uptake. It launched the vegan Air Max 1 x Air Max 97 with Sean Wotherspoon last December. Its new Air Zoom Pegasus 35 Running Shoes are also vegan.

Athletic wear giant Adidas has a stronger track record for vegan shoes made from sustainable materials. It just launches its second sneaker made in collaboration with Parley for Oceans featuring fabric made from recycled ocean plastic. It has partnered with sustainable designer Stella McCartney on a few occasions to launch vegan shoes, including its signature Stan Smith sneakers.

The Maharishi x Nike Air Max 90 launches exclusively via online raffle this week. You must be available to pick it up at Maharishi’s flagship store in Tribeca or London. It retails for $150 will be available via the Maharishi website on August 30.