How to ethically adopt your furry best friend. 🐶🐱
Jump to recipe

This no-bake vegan cashew tart goes out to Maddy. He is one crazy macadamia fan. He eats a handful almost every day. It was pretty hard for him not to pick at this cake while he photographed it. The original recipe for this was the very first raw vegan cake I ever attempted from “The Earth Diet.”

It was topped with mixed berries. I remember being so surprised at how similar it tasted to a real cheesecake except, without a doubt better! I was never the biggest fan of cheesecake because I found them very heavy. I found it difficult getting through a piece without feeling sick. This vegan cheesecake had the complete opposite effect. I could have eaten so much more of it because it was so much lighter. The only difference I could tell with the taste was that I just liked it more. I don’t know what it was exactly about it, but I just thought it was better.

I was also pretty happy I found a way to get more nuts into my diet that didn’t involve snacking. I decided to make this tart because I had a lot of kiwi’s that I needed to use up. I think the combination of kiwi, lemon coconut, and macadamia make it a perfect summer dessert, however, you can top it with whatever toppings you like. I use this as my basic raw vegan cake recipe and change up the fruit depending on what I feel like. It works beautifully with berries or some more tropical type fruit like passionfruit. The recipe is raw, vegan, gluten-free, and refined sugar-free. 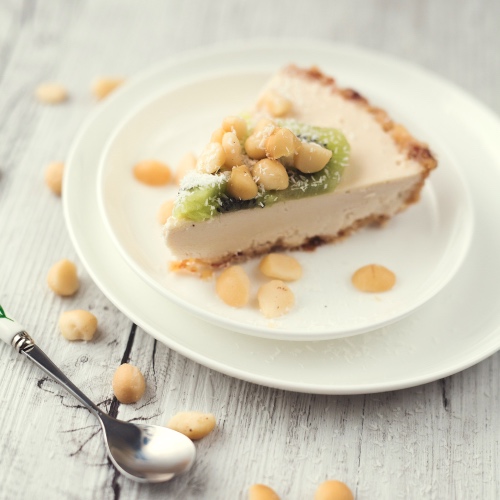 For more delicious vegan dessert recipes, try making my vegan caramel tarts with pecan butter and chocolate. The creamy, vegan tarts are filled with chocolate sauce and will melt in your mouth.

Or, cool off with these vegan lime and macadamia milk popsicles. You only need five ingredients to whip these up: frozen bananas, full cream coconut milk, macadamia butter, unsweetened shredded coconut, and the zest of four limes. This recipe is as easy to make as it is delicious.