You don’t have to give up cheese if you give up dairy. Inhale, exhale — everything is going to be alright. Vegan cheese is no longer what it once was. Today’s dairy-free cheeses taste like the real thing, from individually-wrapped slices that make the most beautiful vegan grilled cheese to artisan nut cheeses for pairing with wine (or non-alcoholic sparkling fruit juice) and crackers. 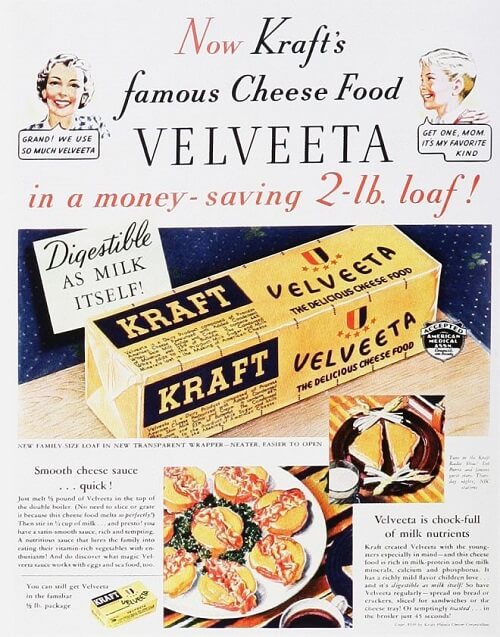 An ad states that Velveeta is “chock-full of milk nutrients.” | Vintage Ad Browser

The question of the day: is cheese healthy? Many of us were raised to believe that cheese is part of a healthy diet. The old food pyramid recommended one to two servings of dairy (milk, cheese, or yogurt) as a source for calcium and vitamin D. Entire marketing campaigns were built on the idea that dairy helps build strong bones. It was even once recommended for babies.

Today, cheese is no longer the dietary staple it once was — relegated to a tiny “Dairy” circle in the new MyPlate nutrition guide. “Calcium-fortified soymilk (soy beverage) is also part of the Dairy Group,” the new guidelines state.

Cheese is also high in sodium. According to the University of California San Francisco Health: “Sodium controls fluid balance in our bodies and maintains blood volume and blood pressure. Eating too much sodium may raise blood pressure and cause fluid retention, which could lead to swelling of the legs and feet or other health issues.”

A 2017 study funded by the National Cancer Institute found that eating dairy may increase one’s breast cancer risk. It analyzed the diets of 1,941 women diagnosed with breast cancer and found that those who ate the most American, cheddar, and cream cheese had a 53 percent increased risk. Those who drank the most milk had a 58 percent increase in their risk for breast cancer. Doctors from the Physicians Committee for Responsible Medicine (PCRM) recently petitioned the FDA to add breast cancer warnings on cheese labels, similar to the one on cigarette packs. 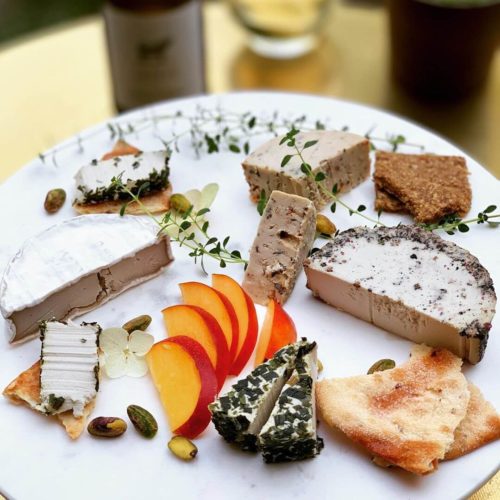 A board from NYC-based gourmet vegan cheese shop Riverdel. | Riverdel

How Do Nut Cheeses Taste?

Vegan cheese has evolved beyond the options found in health food stores of the 1990s, which often tasted plastic-y when melted. Today, we could theoretically divide vegan cheese into two categories. There those that work best as an ingredient in pizza, sandwiches, and tacos, like shreds and slices. Nuts and seeds are used to make some artisan vegan cheeses. Flavors vary. Some vegan cheeses made to taste like the real thing, including varieties like camembert, brie, gouda, and pepperjack.

Aged nut cheeses may be made with vegan prebiotics, which helps it ferment and makes it taste tangy. Miso paste also bestows an authentic flavor.

Vegan cheese can be made from cashews, almonds, and macadamia. It can also be nut-free, made from pumpkin seeds, sunflower seeds, or hemp. But, what’s the best type for making cheese? According to Stiner, owner and operator at Portland, Oregon-based Vtopian Artisan Cheeses, it’s cashews.

“They have a mild buttery taste and when blended they get so magically creamy and smooth,” he tells LIVEKINDLY in an email. He adds, “I make sure to use fair trade brands that get their cashews from farms that treat and pay their workers well.”

Vegan cheese may be kind to animals, but depending on the cashew’s origin, it may not be kind to humans. Traditionally, harvesting and processing cashews is done by hand. The majority of the world’s cashews are harvested in India while Vietnam is increasingly taking a bigger market share, Quartz reports.

Many cashew processors must meet a quota passed on weight. They are paid by this, rather than by hours worked, encouraging people to work fast for extended hours. Processing cashews can be harmful, exposing workers’ hands to the caustic chemicals within the nut. Gloves are available, but due to steep quotes, many forgo them due to how they slow down the shelling process. Many workers’ rights violations have been reported, Quartz notes. But mechanization of facilities –which is slowly happening in some areas, such as Nigeria — can help improve working conditions and make traceability for cashews easier. Choosing fair trade cashews is a way to ensure that you’re buying from an ethical supply chain.

But, what’s the best type of vegan cheese for making what you would typically serve on a cheese or charcuterie board?

Kat Magsaysay, founder of Cruelty-Free Charcuterie in Portland, Oregon, tells LIVEKINDLY that there are three rules to follow: a soft cheese, a hard cheese, and one that can be either cut into cubed or sliced. Magsaysay, who describes herself as “seriously pro charcuterie, especially when it’s sans cruelty,” builds elaborate vegan charcuterie for clients in the Portland area.

She suggests Sweet Simple Vegan’s baked almond cheeseball is one “that I truly love having on my boards.” Magsaysay also loves to build boards with Treeline Chive cheese (“one of my go-to cheeses”), Miyoko’s Sundried Tomato Garlic, Daiya for the cheese slices, and Reine Vegan Cuisine Gouda (“Tastes almost as close as the real stuff!”). 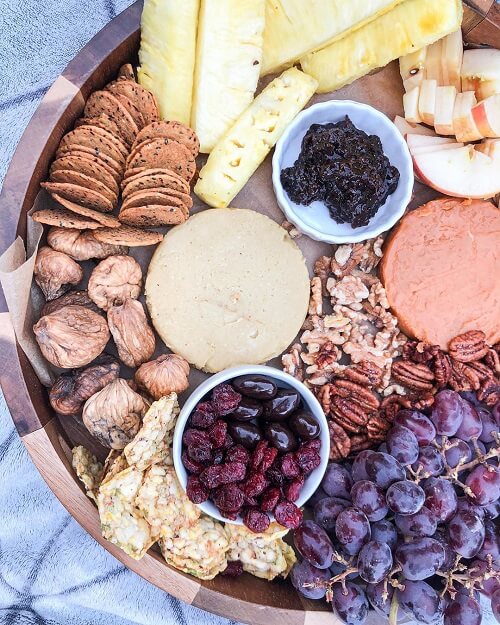 Nut-based cheese is lower in saturated fat and sodium. Since it’s dairy-free, it’s a more sustainable way to enjoy cheese.

A 2010 report from the Food and Agriculture Organization of the United Nations (FAO) found that cheese processing is responsible for more greenhouse gas emissions than any other product from the dairy sector. Research from the University of Wisconsin found that it takes 10 pounds of milk to produce one pound of cheese. That single pound of milk produces 1.2 kg of carbon dioxide CO2. Cheese’s carbon footprint increases as it ages. Cattle are responsible for 65 percent of the livestock sector’s emissions, according to the FAO.

It’s also much kinder to animals. Cows, like humans, feed their babies with milk. The cycle of giving birth and producing milk often results in mastitis, the inflammation of the mammary glands. They live like this, a cycle of being forcibly impregnated to induce milk production, until they are “spent” and sent to slaughter. Dairy products have another victim — the calf. If a baby is female, she will become a dairy cow like her mother. The veal industry usually buys the male calves.

Ready to take a crack at making your own vegan cheese? Try these seven recipes. 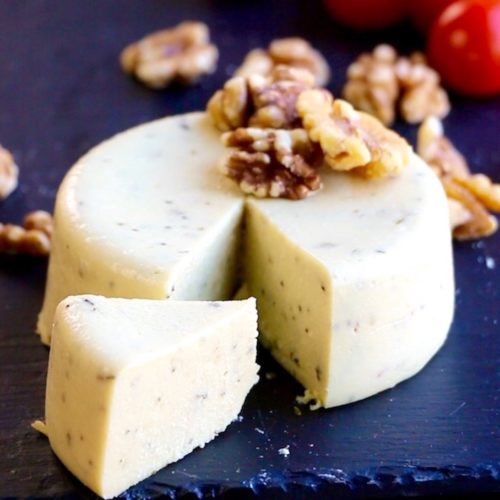 This stress-free cashew cheese recipe is as simple as they come, but has a superior taste and texture.  Just be sure you have nutritional yeast, agar powder, and cornstarch in your pantry before you begin. Pair with Pinot Grigio, seeded crackers, grapes, and sliced apples. 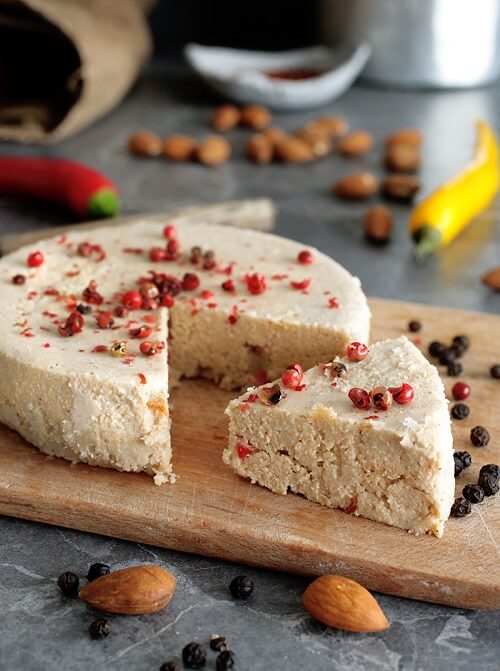 Variety is the spice of life. | Green Evi 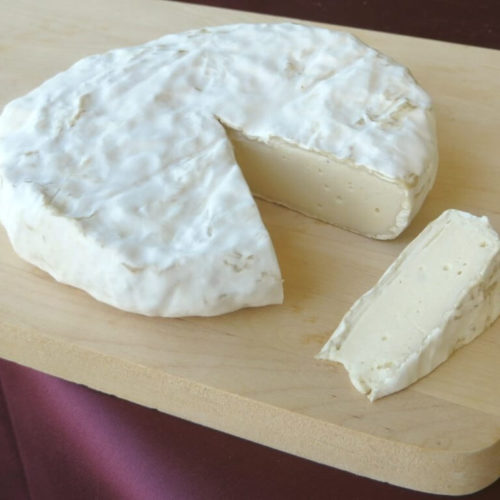 Making this vegan cheese is a breeze. | LowCarb Vegan

This vegan brie is super creamy with an authentic flavor and firm rind. Made from cashews, it uses vegan probiotics to make real, moldy dairy-free cheese. It also melts beautifully, thanks to a high moisture and fat content, making it a great addition to paninis, grilled cheese, and pizza. 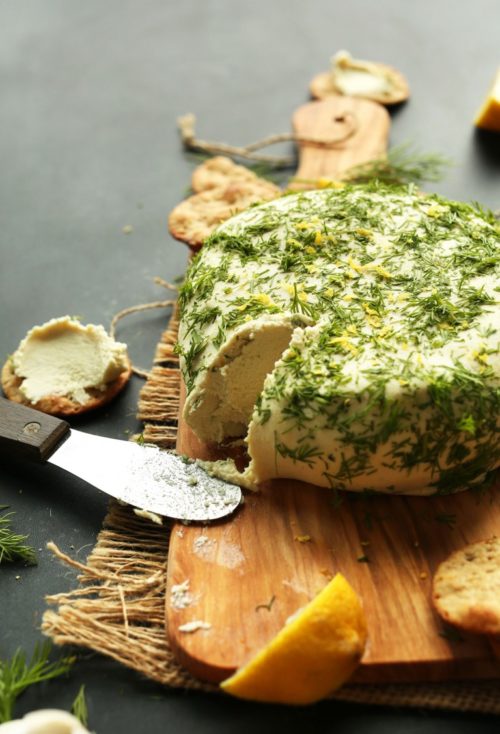 Go hard on the garlic. | The Minimalist Baker

This herb-y cashew cheese is perfect for any cheeseboard. It’s soft and spreadable, so pair it with your favorite crackers, grapes, and vegan sparkling wine. 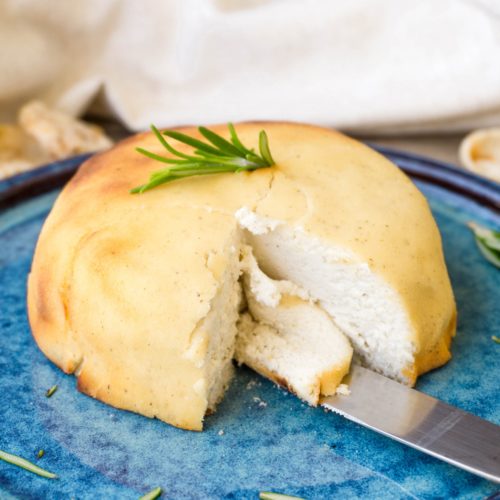 This dairy-free feta made from macadamia nuts is the place to start in the world of baked vegan cheeses. Have a cheesecloth on hand to squeeze out the liquid — it’s an extra step, but it’s worth it. Pair with seeded crackers as a spread or have it with watermelon and vegan rosé. 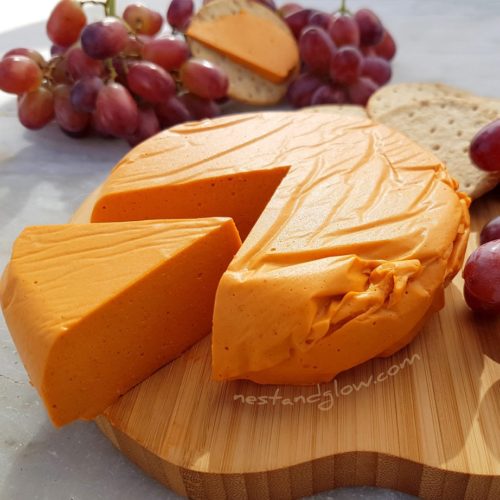 Waste no time making this. | Nest and Glow

This smoky vegan cheese takes just 10 minutes to make and the payoff is a delicious, spreadable appetizer that’ll stun guests. Adding smoked paprika and a touch of maple syrup is the secret. Keep it simple and have this with crackers and grapes. 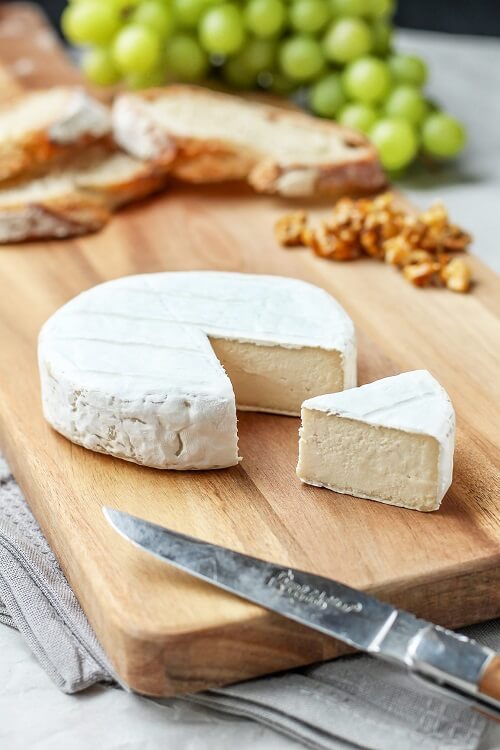 Get your cheese platter ready. | Full of Plants

This raw vegan camembert is soft on the inside and firm around the edges, just like the real thing. Making this dairy-free cheese from scratch requires a head start — it makes use of vegan probiotics, so the finished cheese molds and has an authentic flavor. Pair your homemade vegan camembert French bread, crackers, fig chutney, walnuts, and some maple syrup for drizzling. It goes well with seasonal beer, champagne, Cabernet Sauvignon, or apple cider for an alcohol-free pairing.