Nutritional yeast—you’ll see it called for in vegan cookbooks and on recipe blogs as a key ingredient in dairy-free sauces and cheeses of all types. Also known as “nooch,” nutritional yeast, became popular in health food stores in the 1960s and 70s, where its nutritional benefits drew sales.

This unique ingredient has the appearance of yellow flakes and has a nutty, slightly cheesy flavor that shines in plant-based cheese recipes, dressings, and more. But what is it? 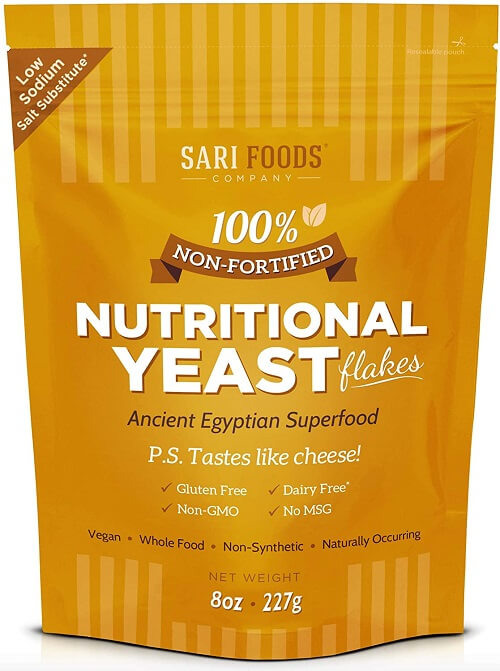 What exactly is nutritional yeast?

What Is Nutritional Yeast?

Nutritional yeast is the dried, inactive form of a Saccharomyces cerevisiae, the same strain used to make brewer’s and baker’s yeast. The type of nutritional yeast available in stores is grown in vats of molasses, nutrients, and water and then pasteurized and dried out. The final drying process breaks it into its characteristic yellow flakes or granules.

Nutritional yeast is available fortified or unfortified, with fortified being the most common.

Though it varies by brand, one tablespoon of fortified nutritional yeast may provide between 30–180 percent of the RDI of B vitamins, including thiamine, riboflavin, niacin, vitamin B6, and vitamin B12. It also contains trace minerals, such as zinc, selenium, manganese, and molybdenum.

Nutritional yeast is also a decent source of plant-based protein. There are two grams of protein in one tablespoon of nutritional yeast, making it a flavorful way to add some extra protein to your diet. 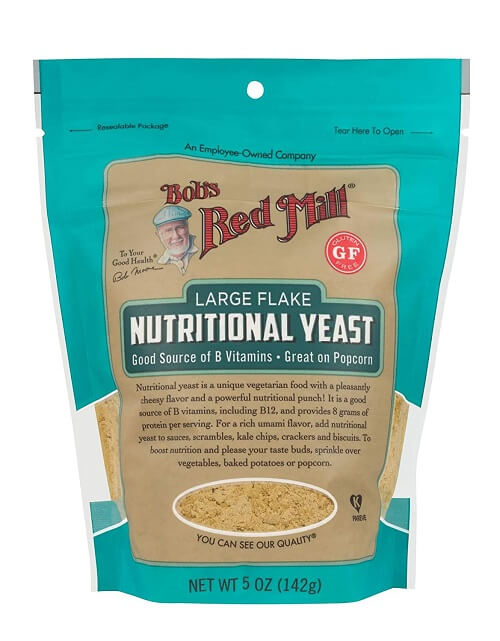 Can you get enough vitamin B12 from eating fortified nutritional yeast?

Nutritional Yeast and Vitamin B12

Nutritional yeast is often fortified with vitamin B12. This vitamin helps keep the body’s nerve and blood cells healthy while also aiding in the creation of DNA. It can also help prevent a condition known as megaloblastic anemia, where the bone marrow produces abnormally large red blood cells. Vitamin B12 and folate deficiency are the most common causes. According to plant-based doctor Michael Greger, founder of NutritionFacts.org and author of the 2015 book “How Not to Die” and its cookbook sequel, vitamin B12 deficiency can also damage the nervous system.

Vitamin B12 is present in animal products such as beef, liver, and dairy products, but it does not come from animals. It’s present in the soil, where microbes form symbiotic relationships with plant roots, leading to the creation of vitamin B12. Many people, regardless of diet, supplement vitamin B12. A number of plant-based foods are also fortified with vitamin B12, including nutritional yeast, and some plant-based milks and cereals. However, Dr. Greger recommends taking vitamin B12 supplements instead of relying on fortified foods.

“Instead of taking B12 supplements, it is possible to get sufficient amounts from B12-fortified foods, but we would have to eat three servings a day of foods each providing at least 25 percent of the Daily Value (on the Nutrition Facts label), with each serving eaten at least four to six hours after the last,” he explains on his website. 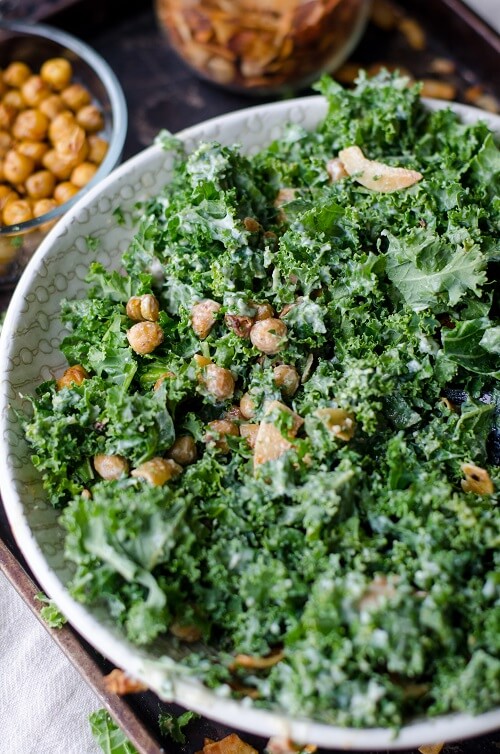 How to Use Nutritional Yeast

The beauty of nutritional yeast is that you don’t need to use it in complicated recipes in order to really enjoy it. Try sprinkling it over salads or pasta as a substitute for parmesan cheese. Mix it into popcorn for a quick, cheesy snack. Or, add a tablespoon to vegan soups for an extra boost of savory flavor.

But, arguably one of nutritional yeast’s best features is its cheesy flavor, which makes it the hero ingredient of dairy-free recipes. It’s versatile enough to work in all kinds of recipes.

Looking for some inspiration? Try these seven vegan recipes, from sauces and soups to mac and cheese and beyond, that use nutritional yeast. 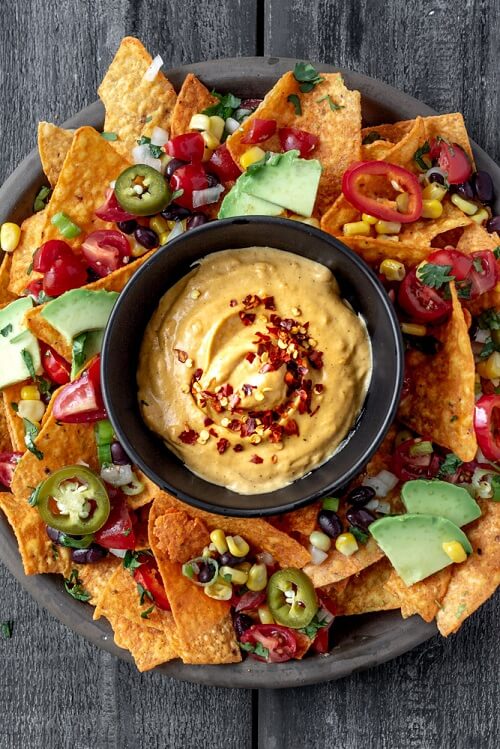 Get the nachos ready. | Simply Ceecee

This vegan queso is made from raw cashews, roasted red pepper, and just enough nutritional yeast to give it a cheesy flavor. Serve it with nachos, over a baked potato, or add it to vegan burritos. 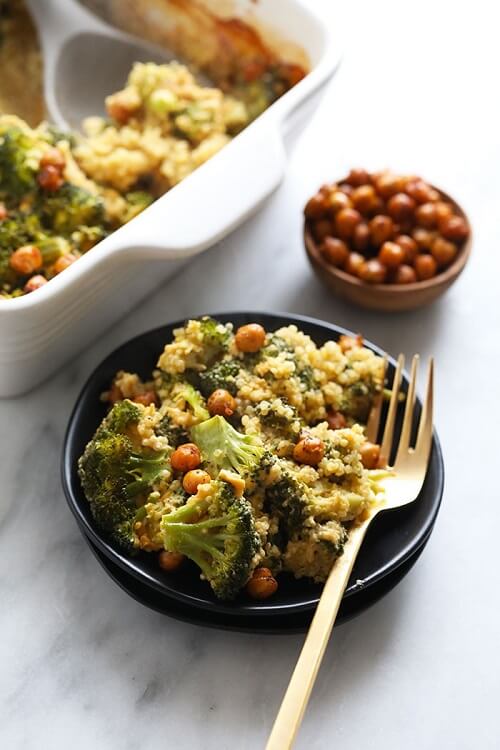 For all the broccoli fans out there. | Fit Foodie Finds

Broccoli and cheese is a top-tier flavor combination. It’s even better when the cheese is dairy-free. This healthy casserole features quinoa, broccoli, and crispy roasted chickpeas baked together in a cashew and sweet potato-based vegan cheese sauce that gets a little help from nooch. 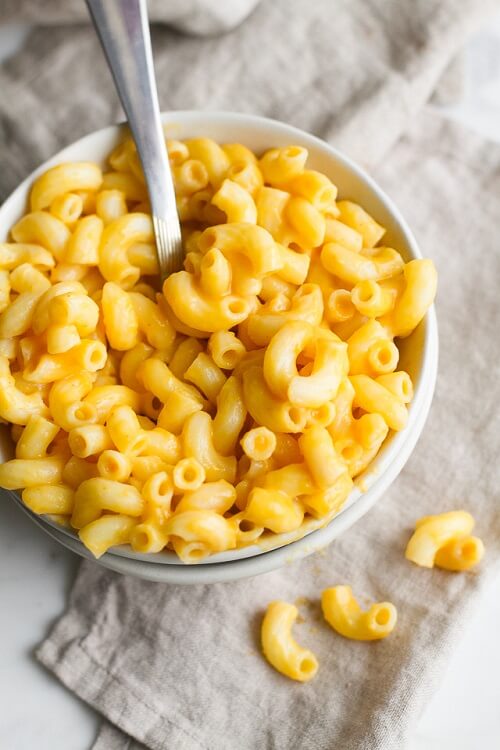 This cashew-less vegan mac and cheese is extra creamy. | Running With Spoons

Mac and cheese is always a classic. This nut-free vegan mac and cheese features a sauce made from sweet potato puree and canned coconut milk, which give it a velvety texture. Add roasted broccoli or some peas to up your vegetable serving. 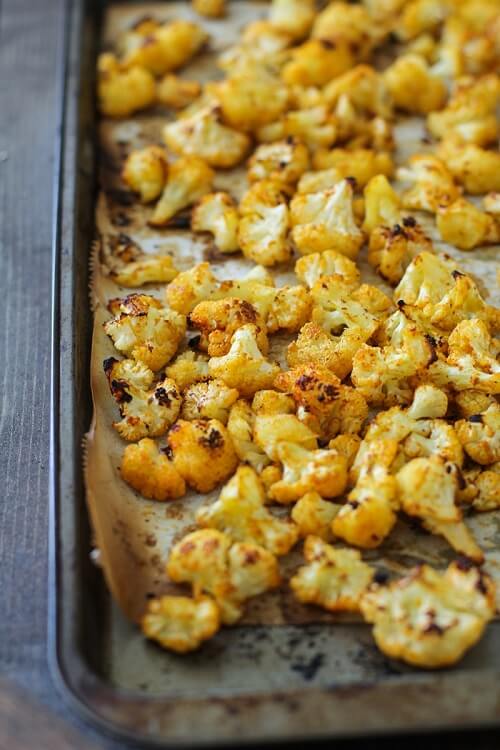 This side dish goes with just about anything. | The Roasted Root

No need to get complicated with nooch. This roasted cauliflower recipe is made from just nutritional yeast and some spices—it keeps things simple, with cauliflower’s neutral flavor allowing the seasonings to shine. 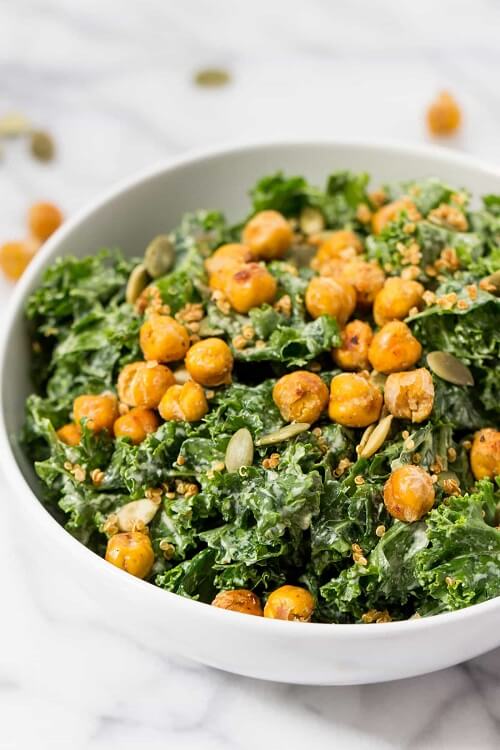 This vegan kale Caesar salad has it all—greens, grains, and protein. It’s combined with a tahini-hemp dressing that gets some of its flavor from nutritional yeast. Don’t skip massaging the kale—this vital step helps make the leafy green tender and not quite as bitter. 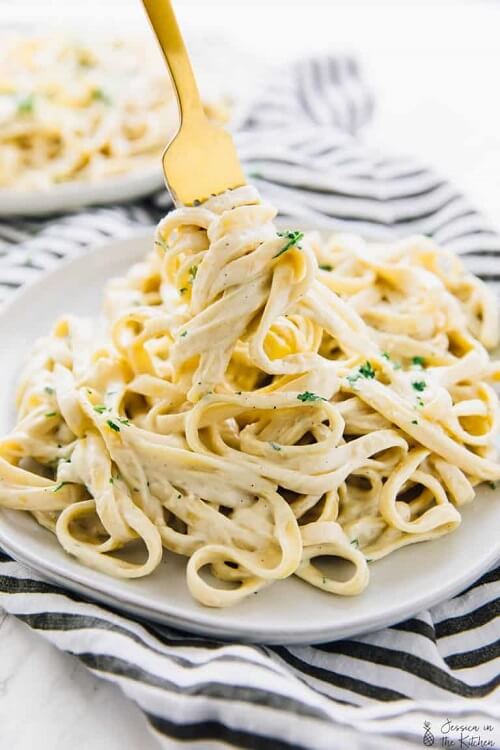 This dairy-free alfredo sauce comes together in 15 minutes. | Jessica in the Kitchen

Need a quick weeknight dinner? Soak some raw cashews overnight, then add them to a blender with nutritional yeast, roasted garlic, onion, and other savory seasonings to make this dairy-free alfredo sauce. 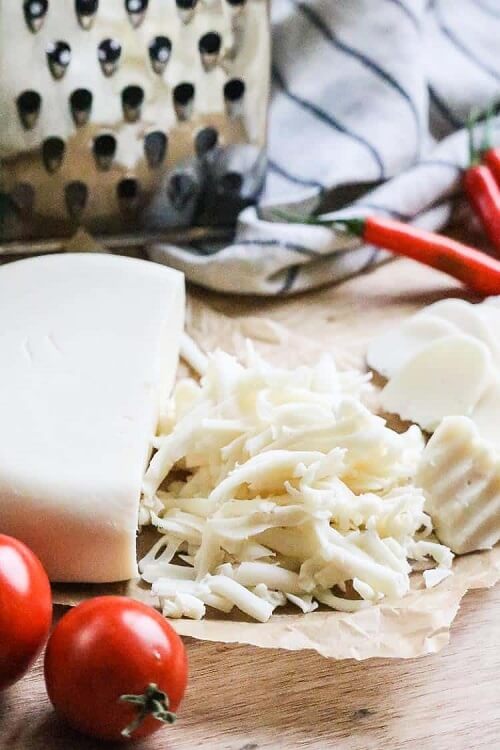 Meltalble vegan cheese isn’t just something you get from the grocery store—you can make it at home, too. This nut-based mozzarella shreds and melts like the real thing, making it a great choice for paninis, pizza, sandwiches, and more.