By Namely Marly
Jump to recipe

This simple moist Vegan Banana Bread is dairy-free and even egg-free thanks to using two bananas. One delicious slice after another is filled with ripe bananas and walnuts. See tips below for making this quick bread gluten-free and sugar-free too!

I’ve been a fan of the banana for as long as I can remember, so the idea of making it into a Vegan Banana Bread recipe was a win from the get-go!

When you combine a crispy crust with a fluffy banana-flavored middle, you’ll end up with a perfect weekday (or weekend) treat.

I grew up in a family of four kids. None of us wanted to get the heal slice when it came to the loaf of bread. I mean, who wants the heal? But that all changes when we’re talking about Vegan Banana Nut Bread. Why? Because the heal is a nice, crispy crust, just like the top. You’ll especially notice this when you eat it fresh from the oven, after it’s just cool enough to eat… but still warm. Ah, warm Vegan Banana Nut Bread. It’s great stuff.

If you love the flavors of bananas combined with walnuts, something tells me you’re going to love this bread too. This is called a quick bread because it doesn’t require yeast to make it rise. However, it still requires a long time to bake the loaf – around an hour. But I promise you, the smells that erupt from your oven and fill your house will make the wait even that much better.

How Can I Make Banana Bread Healthier?

This vegan banana bread is not a low-calorie treat. In fact, it has around 330 calories per slice. You can reduce the calories by making it sugar-free. Bake it with no sugar by using Swerve instead. I’ve had great success with Swerve and you use it on a 1:1 basis with sugar.

Can You Make This Bread Gluten-Free?

You can make this vegetarian banana bread gluten free by subbing gluten-free baking flour in place of the flour recommended below. I love adding around 1/4 cup almond flour to the recipe when using gluten-free flour. It adds a tenderness to the quick loaf. 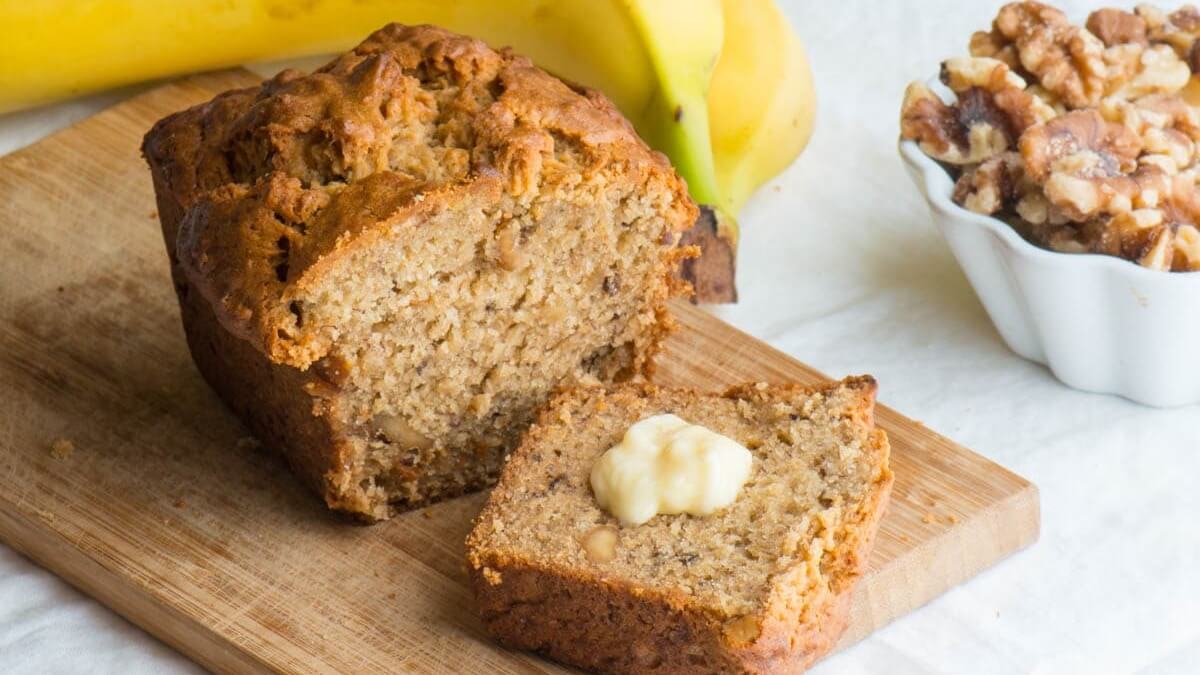 * Toast walnuts by baking for 5 minutes at 300F ** You can use smaller loaf pans but be sure to reduce the baking time.

This recipe was republished with permission from Namely Marly.