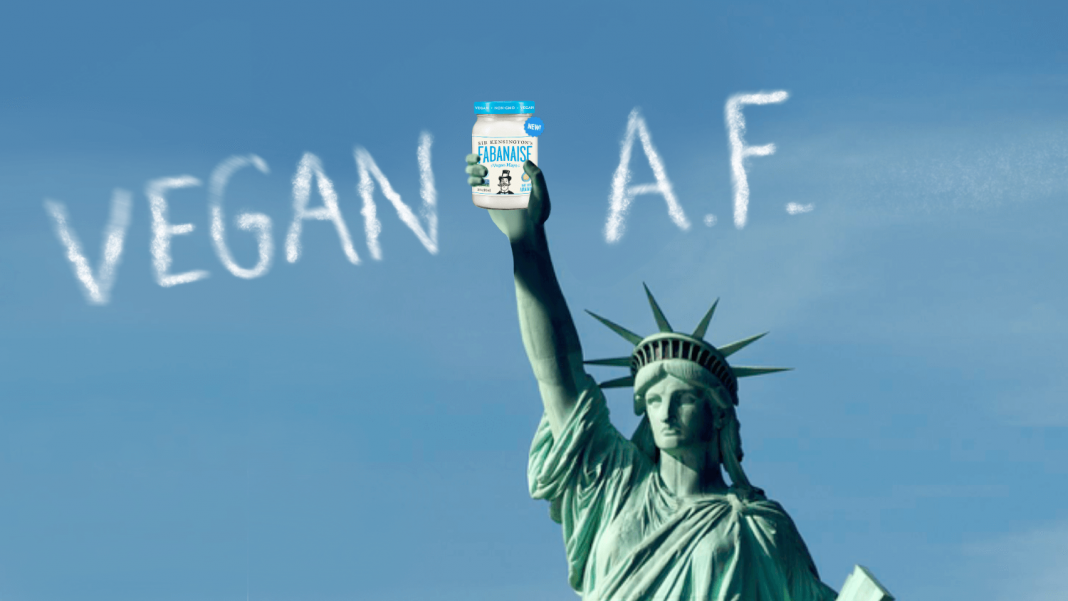 The ads — which feature the company’s egg-less “Fabanaise” mayo and boldly state “Vegan AF” — were spotted on bus shelters throughout NYC. The “AF” is a nod to aquafaba, the normally discarded liquid in a can of chickpeas and the key ingredient in Sir Kensington’s vegan mayonnaise.

Founded in 2010 by Scott Norton and Mark Ramadan, Sir Kensington’s gained traction for its condiments like ketchup made with only “clean” and natural ingredients. The company dove into egg-less mayo territory in 2016 with the launch of Fabanaise. The vegan spread now comes in three flavors: Classic, Avocado Oil, and Chipotle. Last April, Bloomberg reported that global consumer goods giant Unilever purchased Sir Kensington’s for around $140 million.

Our Fabanaise is Vegan AF (Aquafaba) 😉

The “vegan AF” ads aren’t the only plant-based food ads in NYC. Former dairy brand Elmhurst has advertised its dairy-free milk on bus shelters throughout Queens.

The City That Never Sleeps is also incredibly vegan-friendly. Last April, it was named the best city for plant-based food out of a list of the 100 largest cities in the country. According to finance company Wallet Hub, which compiled the list, a city’s ranking was determined by looking at the number of residents ordering vegan options, overall fruit and vegetable consumption, veg fests, and meetups per capita.

NYC will welcome the Vegandale Food Drink Festival, a massive outdoor fest, for the third year in a row. Come September, local and out-of-state vendors alike will overtake a large, grassy lawn on Randall’s Island. The even attracts swarms of attendees and hour-long lines for Peaceful Provisions’ vegan donuts, meat-free soul food, and veggie burgers.