Waitrose customers are in love with oat milk. According to the supermarket, sales recently increased by 113 percent.

Data also show that online searches for “oat milk” rose by 210 percent while “barista” offerings are up by a staggering 1,517 percent on the Waitrose website.

According to June 2019 data from global market research firm Mintel, 23 percent of Brits use plant-based milk. The category is the most popular among people ages 16-24, with as many as a third opting for dairy-free. Cow’s milk usage in this same age group fell by 73 percent in 2019.

Waitrose’s sales were driven primarily by oat milk;  sales increased by 71 percent from 2017.

“With volume sales of cow’s milk already on a downward trend, the fact that more young consumers are turning away from these products does not bode well for this segment’s prospects in the long-term,” said Emma Clifford, Associate Director of UK Food and Drink at Mintel. 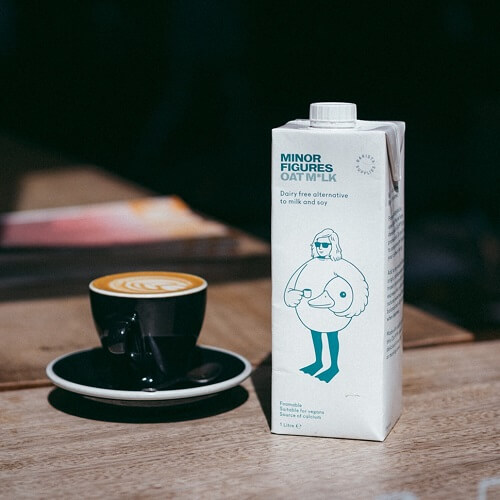 Oat milk’s popularity is on the rise among dairy-free milk customers. | Minor Figures

Popular for its neutral flavor and milky texture that foams similar to cow’s milk, oat milk has enjoyed success in the US as well. Data from The Good Food Institute, a nonprofit that works to accelerate plant-based products, show that oat is the fastest-growing variety of vegan milk in the nation. Sales grew by an impressive 686 percent in 2019.

Oat’s dominance in the plant-based milk market coincides with the launch of Swedish brand Oatly in late 2016. Originally launched in Chicago-based chain Intelligentsia Coffee, it is now available in supermarkets across the nation as well as 1,300 Midwest Starbucks locations. In the UK, Oatly has been available in Starbucks stores since January 2018. The brand also recently attracted a $200 million investment from high-profile individuals including Oprah, Natalie Portman, and Jay-Z.