A new billboard at Waterloo station in London — courtesy of Oatly — is encouraging people to go vegan.

“Go ahead, eat like a vegan,” the advertisement reads above cafes and turnstiles at the central London station. Waterloo station, opened in 1848, is the busiest station in the UK. Between 1 April 2017 and 31 March 2018, the station had more than 94 million passengers according to data from the Office of Rail and Road (ORR).

The billboard isn’t Oatly’s only effort at the popular station. The plant-based dairy brand has handed out free vegan ice cream to passersby there. Oatly has been taking its bright pink and white ice cream truck to locations in London and Brighton to offer people its frozen desserts. Oatly writes on Instagram that the truck is “so ridiculously adorable” that people “might never suspect it is an agent of change sent by the post milk generation movement to convert as many new members as possible with its salted caramel chocolate fudge hazelnut swirl propaganda.”

The company uses oats to makes its dairy-free ice cream. Since it contains no animal products, it is — by nature — free from cholesterol. 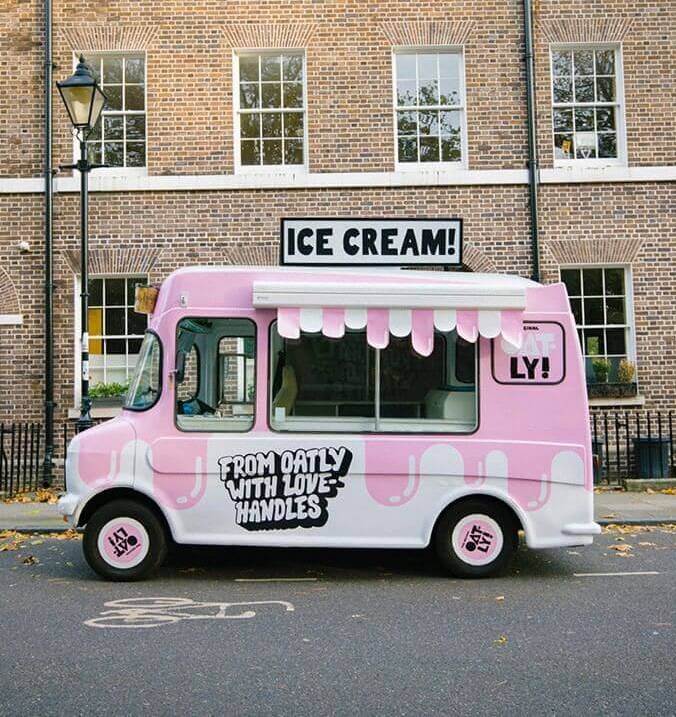 Oatly hands out free vegan ice cream to people around the UK. | Oatly

Last year, Oatly announced the launch of a £700,000 advertising campaign in the UK. The company created a 15-second commercial that appeared on All 4, the on-demand platform for Channel 4. The ad featured the CEO of Oatly, Toni Petersson, singing a song in a field of oats.

Oatly also put up advertisements in several London underground stations including Kings Cross, Oxford Circus, Shoreditch, Peckham, and Brixton. The ads featured statements like: “It’s like milk, but made for humans.”

Michael Lee — Oatly’s creative and strategic director for international markets — said in a statement, “Some consider our messaging to be controversial. We disagree. It’s fact, because our oat drinks actually are made for humans, rather than for baby cows.”