Named “Oatgurt,” the popular brand’s new product — made with a fermented oat base — comes in four different flavors: Natural, Strawberry, Elderflower, and Vanilla. It can be consumed on its own, or added to smoothies, granola, or substituted in recipes, as it has a similar consistency to traditional dairy-based yogurt.

Oatly revealed the new product on its Instagram account, acknowledging that even though the name may sound a bit weird, the product is still just as environmentally-friendly, tasty, and nutritious as it’s other products — which include oat milk, barista style oat milk, flavored oat milk, ice cream, and on-the-go canned lattes.

“If you’re wondering, ‘what could possibly be cool or forward-thinking about something called Oatgurt?’ It’s okay, go ahead and laugh. Yeah, it’s not an awesome product name. At least we didn’t go with ‘Fermented Oat Base,” the brand wrote.

“If you can get past the name, it is a pretty progressive product that you can use like yo-gurt only it’s made from oats not dairy, so it gives you beta-glucans, nice unsaturated fat and the good vibes that come from making a thoughtful choice for the planet,” it continues. 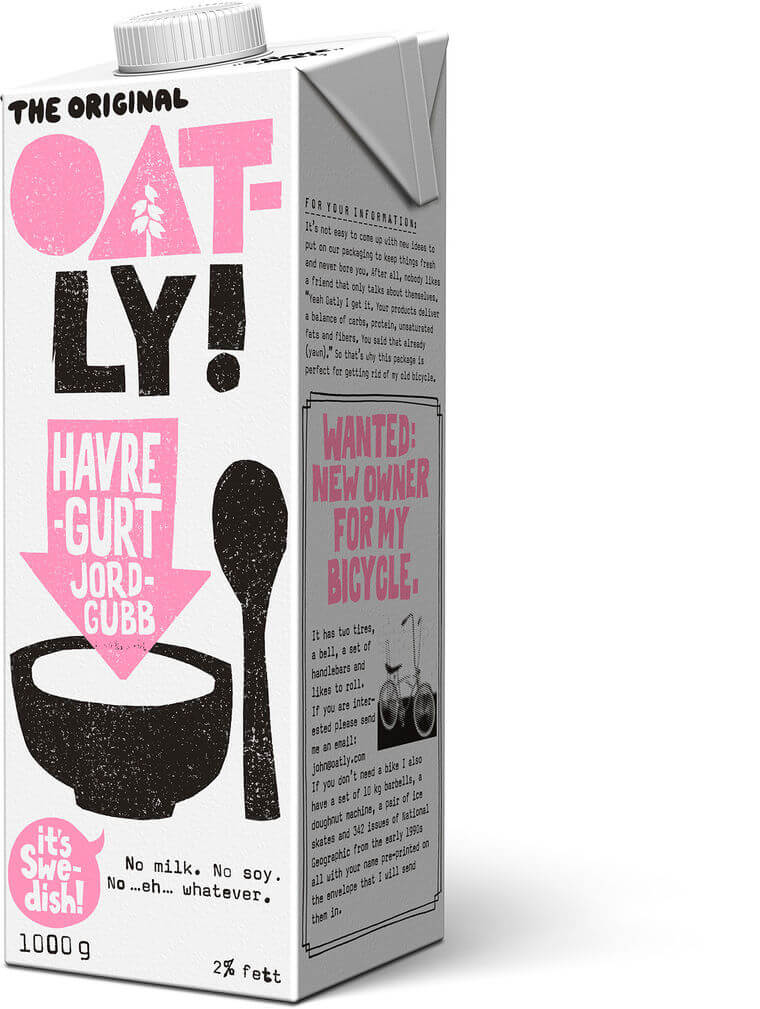 Oatly is all about making thoughtful choices; founded back in the 1990s, it aims to make products “without recklessly taxing the planet’s resources in the process,” according to its website.

It’s not shy about encouraging consumers to make more thoughtful choices either. Last year, it ran an advertising campaign on the streets of Rotterdam and in London tube stations, which promoted its product alongside the tag line “like milk but made for humans.”

The ads received some backlash, however, the company stuck by its statement. “Some consider our messaging to be controversial,” said Michael Lee, Oatly’s creative and strategic director for international markets. “We disagree. It’s fact, because our oat drinks actually are made for humans, rather than for baby cows.”

The company followed this ad campaign with another launched earlier this year in Shoreditch.

Just in time for the London Coffee Festival, Oatly took its message to the side of walls in Shoreditch, painting huge murals with the simple message “ditch milk.”