Vegans get a pretty bad rep and to prove how justified it is, Whisper decided to put together a list of the 20 most obnoxious things vegans have said. Going on about veganism almost as much as vegans do just to make sure everyone knows how much vegans talk about veganism. Sounds exhausting.

So just how obnoxious can vegans be?

Well, apparently vegans are struggling with the idea of vegans and non vegans dating.

Whilst it’s understandable that a vegan would only want to date someone who is themselves vegan, it’s also completely possible for vegans and non vegans to have successful, long lasting relationships! Ultimately it’s up to an individual what they’re looking for in a partner.

Erm, this one might take more than vegan expertise to tackle. Hope you guys are doing okay now…

According to Whisper contributors, vegans are also taking their activism a little too far. 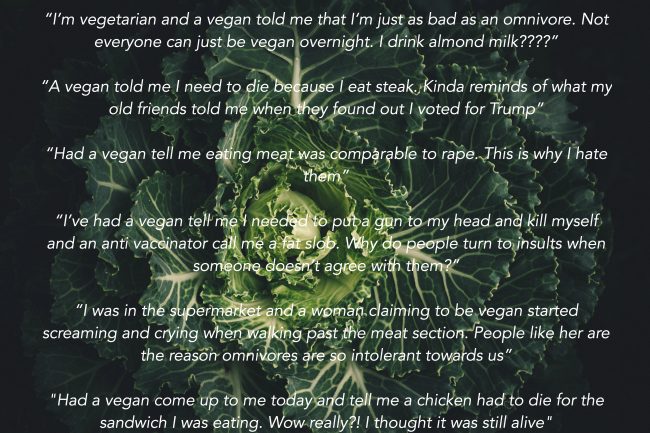 Oh gosh. It can be so very difficult not to let your passion for animal welfare take over when you know the cruel realities of animal agriculture. Unfortunately the best way to spread the vegan message is to treat humans with the same compassion that you want to treat animals with. 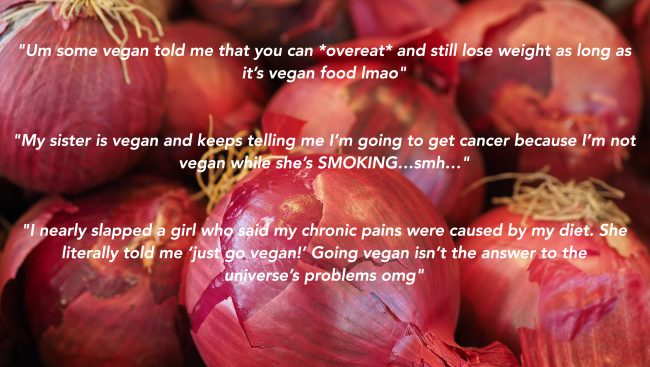 Although a plant based diet can’t guarantee good health, it’s been proven to alleviate the symptoms of and help prevent all sorts of diseases! A whole food plant based diet also means you can have much bigger portions for the same number of calories and often more vitamins.

This sounds great! Where can we get some? 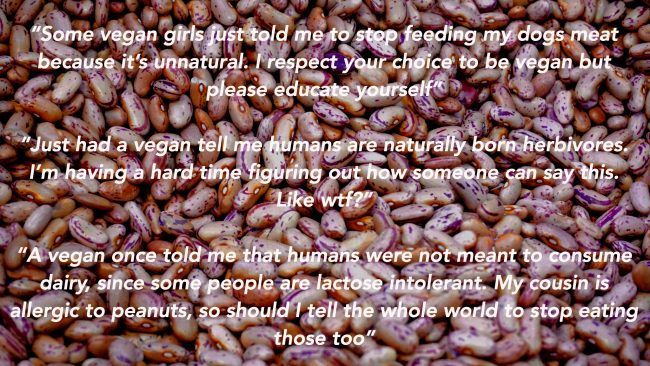 Did you know that dogs can thrive on a plant-based diet? The oldest living dog in 2002 was a 27 year old Border Collie named Bramble and she lived happily on a vegan diet. Also many of our ancestors were herbivorous! We definitely don’t want to live in a world where people don’t eat peanuts, but as it happens most people are lactose intolerant and just don’t know it. When humans grow out of infancy they stop producing lactase, an enzyme necessary for breaking down the proteins in milk so giving up dairy isn’t as extreme as it sounds.

So are vegans really obnoxious? Sorry Whisper it’s a no from us. Passionate, enthusiastic, and keen to educate for sure but obnoxious seems just a little too harsh.