The plant-based fish was already available as sushi and sashimi at 40 Whole Foods locations across the US., as well as a number of other select supermarkets, schools, and even corporate cafes.

According to a recent Instagram post, the vegan tuna is also now available at 19 Whole Foods stores across Alabama, Illinois, Indiana, and Minnesota.

Last March, the NYC-based brand entered a partnership with DOT Foods, the nation’s largest food redistributor, which has nine distribution centers across the country, per the Vegconomist.

“Our partnership with DOT will allow restaurants and foodservice establishments of all sizes to easily order and serve Ahimi to showcase their commitment to seafood sustainability and inventive menu options for plant-based customers,” the company said in a statement.

Founded by chef James Corwell in 2015, Ocean Hugger Foods is known for its vegan “Ahimi” tuna made from tomatoes marinated in a mixture of soy sauce, sugar, and sesame oil.

Last November, it was added to the menu at all 12 locations of chain restaurant Blue Sushi Sake Grill. It’s also available at smaller chains across the country, including North Shore Poké Co and Aloha Poké Co.

Ahimi has been well-received, including by New York Times food critic Florence Fabricat, who said it “nailed the color and texture of tuna.”

Last May, Ocean Hugger Foods announced a partnership with Tokyo-based food wholesaler Nishimoto. The relationship between the two brands will see to distribution across the globe. Nishimoto has 23 North American offices and 14 in Europe.

Vegan Seafood on the Rise 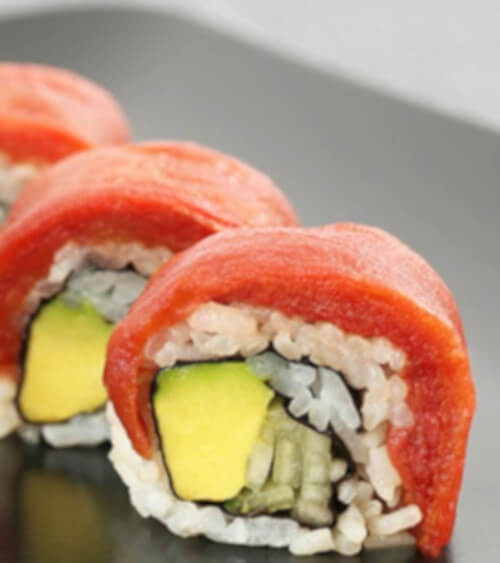 The market for vegan seafood is set to explode with a number of brands working to replicate seafood from plants–include sea-based algae and seaweed. New Wave Foods has developed vegan shrimp that is currently being served at the Monterey Bay Aquarium’s visitor cafe. The young biotech company is focused on environmental stewardship and ocean sustainability, similar to the mission of Ocean Hugger Foods.

According to a report by WWF (World Wildlife Fund), the population of marine vertebrate across the globe has dropped by 49 percent since 1970. The report also revealed that commercial fish stocks have declined by nearly 75 percent. These figures can be primarily accredited to commercial overfishing and climate change.

Further, it has been predicted that more plastic will inhibit the ocean than fish, by the year 2050. With the abundance of plastic in the ocean, the non-biodegradable material breaks down into smaller plastics known as microplastics – which are ingested by fish and eventually enter the food chain.