Okinawa has the highest concentration of centenarians in the world, and the regional diet and lifestyle may be the key to Okinawans’ remarkable longevity.

Okinawa is the largest of the Ryukyu islands, which sit southwest of Japan between the East China and Phillippine Seas and near to Taiwan. The traditional Okinawa diet is high in carbohydrates, low in calories, and emphasizes locally grown plants and vegetables.

Overall, the diet is filled with nutrient-dense but low-calorie foods, resulting in a slight calorie deficit. Healthcare organizations such as the NHS recommend between 2000 and 2500 calories per day. While the typical, traditional Okinawa diet yielded approximately 11 percent less than the RDA. Several studies indicate that a minor caloric deficit may lead to improved overall health when combined with sufficient nutrients.

According to a report by Science Direct, Okinawa has 68 centenarians for every 100,000 residents. This is more than three times the number of centenarians found in comparable U.S. populations. More than 85 percent of the people who reach 100 years of age are women.

The Okinawa Centenarian Study (OCS), founded in 1975, has been investigating the life expectancy of Okinawa citizens over 100 for more than 45 years. By 2016, the OCS had examined 1,000 centenarians from the Okinawa region.

So what exactly does the Okinawa diet include? And why is it so healthy? 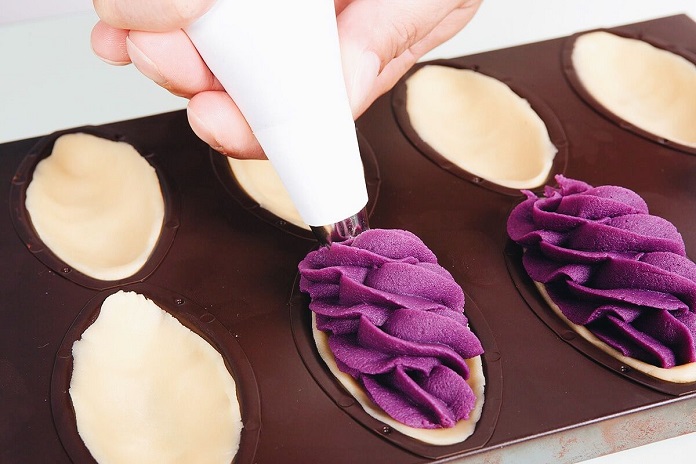 Purple sweet potatoes are a staple food of the Okinawa Diet. | Visit Okinawa

What is the Okinawa Diet?

In the mid-20th century—when Okinawa’s current centenarians were young adults—the typical island diet focused on home-grown vegetables, tofu, and small quantities of seafood. Approximately 60 percent of total calories came from a local, purple-fleshed variety of the sweet potato known as beni imo, as well as the white-fleshed tuber taro.

Beni imo, in particular, is an Okinawan staple. Restaurants, stores, and street food stalls all stock the bright purple potato. In Japan, there is even a beni imo flavored KitKat.  In its natural form, it is extremely high in B vitamins and potassium and contains a higher concentration of the antioxidant anthocyanin than blueberries. Beni imo is also high in vitamin C, vitamin A, and has a low glycemic index that can help regulate blood sugar.

Overall, the Okinawa diet of the mid-20th century features what is now known as the “Okinawan ratio” of 10:1 carbohydrate to protein. While not technically a low protein diet, it still particularly emphasizes carbs. It also deprioritizes animal-derived proteins such as seafood and red meat.

By as early as the late 19th century many Okinawan households kept a family pig. But pork products were and are mostly eaten in moderation or as celebratory foods. Meat and seafood make up just 2 percent of the traditional islander diet.

While informed by a variety of neighboring countries and cultures, Okinawan cuisine is singular. Many of the region’s popular dishes are completely unique to the archipelago. Chanpurū, a popular stir-fry, combines tofu with a small portion of vegetables, meat, or fish.

Variations may include gōyā, a bitter melon, along with thinly sliced pork or spam. While not meat-free, this dish notably emphasizes plant foods and vegetables as the heart of the meal.

Cabbage, okra, pumpkin, and daikon radish are also popular ingredients. These types of vegetables make up approximately 60 percent of the traditional Okinawan diet. Grains such as wheat, millet, and rice make up 33 percent. While soy-based foods such as tofu, miso, and edamame make up 5 percent.

Because of its location, the Pacific archipelago of Okinawa blends cuisine and cooking styles from China, Southeast Asia, and Japan. Both Okinawa and Japan have food-centered cultures, while the concept of food as medicine is commonplace in China.

The Okinawa diet incorporates this, particularly through its use of herbs and spices thought to have medicinal properties, such as turmeric. The vibrant yellow or orange spice contains curcumin, which some studies indicate has significant anti-inflammatory properties. It may also lower the risk of heart disease and Alzheimer’s.

While there are a variety of different factors that contribute to longevity, access to healthy food does significantly—and demonstrably—impact health. According to the Physicians Committee for Responsible Medicine (PCRM), plant-based whole foods can prevent and treat many chronic health conditions, such as inflammation and diabetes.

The traditional Okinawa diet includes seaweed, particularly kombu and wakame. Both varieties are rich in vitamins and known to reduce blood cholesterol and hypertension. Wakami is also high in iodine, iron, and calcium, along with vitamins A and C. Much like the beni imo, wakame can help regulate and maintain blood sugar levels.

The modern Okinawa diet still emphasizes traditional foods, but westernization and other factors have led to an increase in the consumption of meat, processed food, and refined sugar. By the year 2000, the risk of heart disease and other health concerns had risen significantly.

While there is no magic wand for long life, research increasingly indicates that emphasizing plant-based foods, whole grains, and unsaturated fats—along with an active, healthy lifestyle—can support personal health and even longevity. Much like the diets found in any of the other so-called “Blue Zones” around the world. 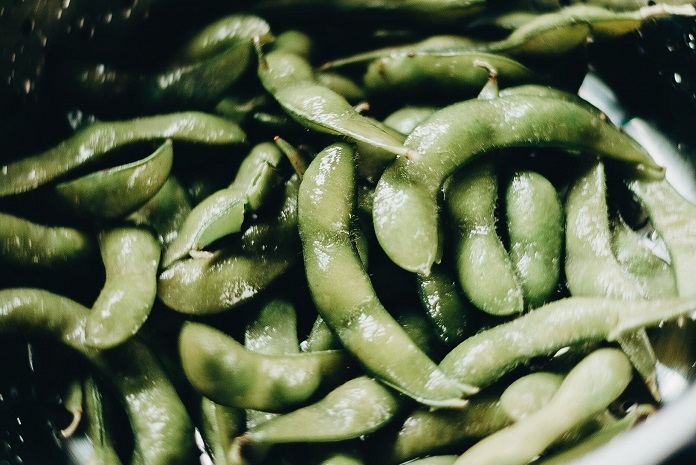 Edamame is high in protein and fiber. | cottonbro/Pexels

Specific Blue Zone regions include Icaria in Greece, Sardinia in Italy, the Nicoya Peninsula in Costa Rica, Loma Linda in California, and Okinawa. While diets in these regions naturally vary, there are a few common factors. Including a particular emphasis on carbohydrates and plant foods.

Beans and legumes are also widely thought to support longevity. As is limiting the consumption of red meat in favor of small quantities of fish or plant proteins. Not overeating, and consuming the bulk of the day’s calories in the morning and afternoon may also contribute to a longer life.

Plant foods are high in fiber, which significantly reduces the risk of cardiovascular disease and certain cancers. While the natural estrogens in tofu and other soy products, flax, legumes, and broccoli are thought to contribute to the longevity of Blue Zone and Okinawan women, in particular.

There are other cultural and social factors in longevity, too. In Okinawa, consistent and supportive social interaction may contribute to the islanders’ health. A “moai” is a lifelong circle of friends that supports each other into old age. This concept comes from the ancient practice of yuimaru, or mutual aid, which helped support community members with the greatest need.

Now, Okinawans form moai as supportive social groups, but members continue to support one another as much as possible. Loneliness has a significant impact on physical and mental health, and studies indicate that tight-knit communities and regular socializing can reduce depression in older people.

The Mediterranean and other Blue Zone regions also emphasize both socializing and staying active within the community. Exercise, regular time with others, and healthy eating intersect and provide overall health improvements.