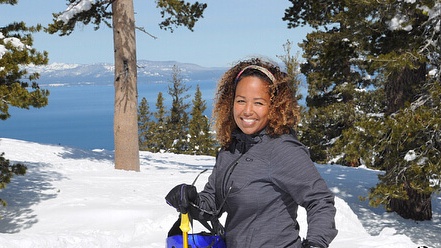 Olympic skier Seba Johnson has continuously excelled in her career; she was the first-ever Black female skier to compete at the Olympics and the youngest alpine ski racer at the 1988 Winter Olympics in Calgary, Canada – competing at the age of 14. The athlete is also a budding author who is currently looking for a publisher for her memoir, and she has achieved all of this without the need for animal products.

In an interview with LIVEKINDLY, Johnson talks about being raised as a “strict vegetarian” (“people weren’t using the word vegan yet”), what life was like without dairy, and her thoughts on the age-old myth that “milk makes for strong bones.”

A vegan since birth, Johnson was taught from an early age that “milk is for babies, whatever the species may be. One only drinks the milk of her or his mother,” she recalls. Adding that after she stopped breastfeeding from her own mother, she “no longer needed mammary gland secretions, and certainly not from someone else’s mother like a cow or goat.”

According to Johnson, humans have much to learn from animals; it’s only natural that we stop drinking our own mother’s milk from a certain age. “Growing up without dairy was the natural thing for me to do,” she says, noting that “horrific agony, fear, and suffering,” goes into “every lick of ice cream,” as well as every slice of cheese, dollop of sour cream, or taste of yogurt or creamer. Knowing all of this, she never felt like she was missing out, despite being faced with “beautifully decorated” cakes and “intriguing colors of ice cream” at children’s parties when she was younger.

Her own mother’s cakes did not quite match up, she notes, however in lieu of impressive baked goods, her family introduced her friends to a variety of exciting and different fruits and vegetables. “My friends still to this day remind me of the food items they tried for the first time in their life at my house,” she says. “So instead of dairy items being the focus, it was fresh pomegranates, avocado, pineapple slices, vibrantly colored berries, and Juicey-Juice.”

Trying to show off my @switch4good t-shirt from the #DairyFreeAthleteSummit BUT couldn’t stop laughing at the voicemail I got from a neighbor this morning. This is what she said after driving past #LangstonTheVeganDog, #BraddockTheVeganDog and I, “Aw you look so cute with your little braids, you look like you are 20 years old!” ? I guess that’s what happens when you’re 45 and don’t drink #dairy! I made the #Switch4Good after infancy – once weaned off my OWN mother’s milk. Let the calves (baby cows) and kids (baby goats) have the milk their mom’s body produced for them. She certainly did not make milk for us, as we were not birthed from her womb. ??‍♀️. Oh! And in the last pic, the woman whose character coined #ByeFelicia is vegan too … check out her @jackfruitcafe #foodtruck if you haven’t already! #Love you @angelamonicameans ??✊? . . . . (If you want to know more about milk, please check out: #dairyisscary ?)

Another key difference between herself and her dairy-eating classmates, she remembers, was that her childhood was distinctly lacking in runny noses, stomach problems, and constipation. “My sister and I barely got sick,” she notes. “I honestly can’t remember ever staying home sick, unless it was to go skiing and skip school.”

And as for strong bones, a lack of dairy milk didn’t let her down there either. “These dang marketing gimmicks that people start to believe, about milk making strong bones and stuff,” she said, noting that a number of doctors – including Dr. Milton Mills and Dr. Michael Klaper – do not recommend milk to their patients at all.

“In school textbooks we are brainwashed into thinking cows and other animals are here for us to drink from and eat,” she says. “More often now I see athletes perform their very BEST once they’ve cut dairy from their consumption. Once they get rid of dairy they are able to breathe, sleep, and recover faster!”

The good news is, if you do opt to ditch dairy, nowadays we are spoilt for choice with other options, says Johnson.

“Oh my gosh, where do I begin,” she says. “There is a plethora of options we have today. Back in my day I had to pour orange or apple juice on my cereal if I wanted to have it, but now people have access to all sorts and brands of organic soy milk, almond, hazelnut, cashew, flaxseed, coconut, hemp milk, and more. I try new types all the time.”