Alex Morgan, a recent vegan and Olympic gold medalist, just shot an ad campaign with PETA to promote shelter pet adoption. She appeared in the ad with her rescue dog, Blue, urging the audience to adopt rather than shop for companion animals.

Morgan is an American professional soccer player with an impressive athletic resume, but her most recent work has focused on spreading compassion for animals. In her recent ad with PETA, she redefines the perception of companion animals. She stressed that animals are not ours to own or buy. Rather, animals can be a part of our family, and we should adopt, not shop.

Appearing with her pit bull, Blue, Morgan says, “We’re not owners, if anything, [Blue] owns us. He owns our heart.” She continued, “There’s so many animals on the streets and so many animals that aren’t able to live the life that they should be able to live, so I wanted to adopt a dog. Animals should always be a part of the family, be taken care of, just as any child would be.” 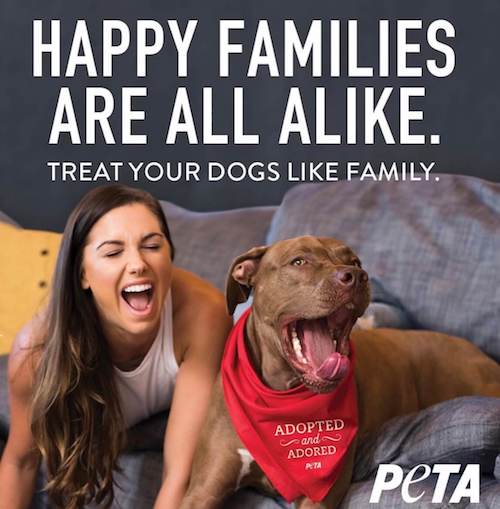 Although this soccer superstar has always loved animals, she only discovered the vegan diet three months ago, according to her Twitter posts. She recently tweeted to her fans, “3 months eating vegan and now asking for help from my Orlando peeps. Send me your fave vegan fiends spots! Yu share yours, I’ll share mine!”

When a follower asked how her energy levels felt, Morgan tweeted back, “Way more energy now! Don’t need as much sleep or coffee.” Fans eagerly responded to her shoutout, and she kept her promise to share as well. Her favorite Orlando eats include Market on South, Sanctum, Ethos Vegan Kitchen, Chipotle, Lineage Coffee, Create Your Nature, and Cay Cakes Bakery.

Morgan has gained a substantial following, boasting 3.6 million followers on Twitter alone. Her fame has grown from her many accomplishments through her soccer career. In 2009, she became the youngest athlete of the US women’s national soccer team. In 2012, she helped the US secure gold in the London Olympic Games and was named the Female Athlete of the Year by US Soccer.

Morgan is one of the many professional athletes who has transitioned to a vegan diet and championed animal welfare. Most notably, Olympic medalist Dotsie Bausch, pro surfer Tia Blanco, pro paddleboarder Donica Shouse, and Olympic gold medalist Meagan Duhamel have all publicly spoken to the health and ethical benefits of a vegan diet.