A killer whale named Tahlequah captured the world’s attention in August 2018 after she carried her dead newborn calf for 17 days. But now, there is a silver lining to her story. The grieving mother orca has given birth to a healthy baby calf.

Researchers from the Washington-based nonprofit Center for Whale Research estimate the calf, named J-57, was born on September 4. Earlier this month, they spotted it swimming alongside its mother in the waters between Washington state and British Columbia.

Scientists first discovered that Tahlequah, also known as J-35, was pregnant back in July while recording drone images of Southern Resident killer whales. The family of orcas is the smallest of four communities within the Northeastern portion of the North America Pacific Ocean. Tahlequah’s community includes about 73 whales.

This isn’t Tahlequah’s first successful birth. She gave birth to a baby boy in 2010. But the baby she lost in 2018 wasn’t as lucky. After carrying the calf for more than 17 months, Tahlequah gave birth and was able to bond with the baby for about 30 minutes before it died.

Killer whales have been known to carry their dead calves or stillborns. However, experts say the length of time Tahlequah carried her dead baby was quite unusual.

“We’ve seen mother whales carry dead babies briefly, for parts of a day. We saw one a few years back for a couple days. But this sets a record,” Ken Balcomb, senior scientist at the Centre for Whale Research, told BBC.

Some argue that viewing Tahlequah’s display as grief is anthropomorphism—the attribution of human characteristics onto non-human animals. But studies show orcas do possess high levels of intelligence and empathy similar to humans.

“We know that it swam by her side. So there would have been a bonding, a birthing experience,” Jenny Atkinson, executive director of The Whale Museum, said during an interview. “So there is a part of me that believes that the grief could be much deeper, because they had bonded,” Atkinson added. 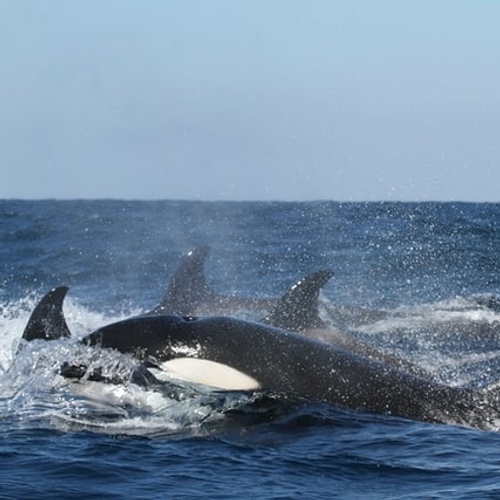 Officials list the orcas as endangered in the U.S. and Canada. | NOAA via Unsplash

What made Tahlequah’s story even more harrowing is the fact that officials list the Southern Resident killer whales as endangered in both the U.S. and in Canada.

Experts say the whales suffer environmental stresses and malnourishment due to lack of ample nutrition. Their primary food source is the endangered Chinook salmon.

A 2017 study published in the journal PLOS ONE found that more than two-thirds of Southern Resident killer whale pregnancies were lost between 2008 and 2014. “Low availability of Chinook salmon appears to be an important stressor among these fish-eating whales as well as a significant cause of late pregnancy failure,” the study’s authors wrote.

The Center for Whale Research supports these findings, estimating that an average of 40 percent of the orcas’ calves die after birth.

Wildlife conservation scientist and photographer Alena Ebeling-Schuld told the Guardian that Tahlequah’s story means a great deal to her. “Her tour of grief was beyond impactful, telling the story to a wide audience not only of the plight of Southern Residents, but also of the complexity of animals’ emotions—something humans are so quick to disregard,” she said.

“This new birth brings new hope—for Tahlequah and for all of us,” she continued. “I am wishing Tahlequah and her new little one the very best with all of my being.”