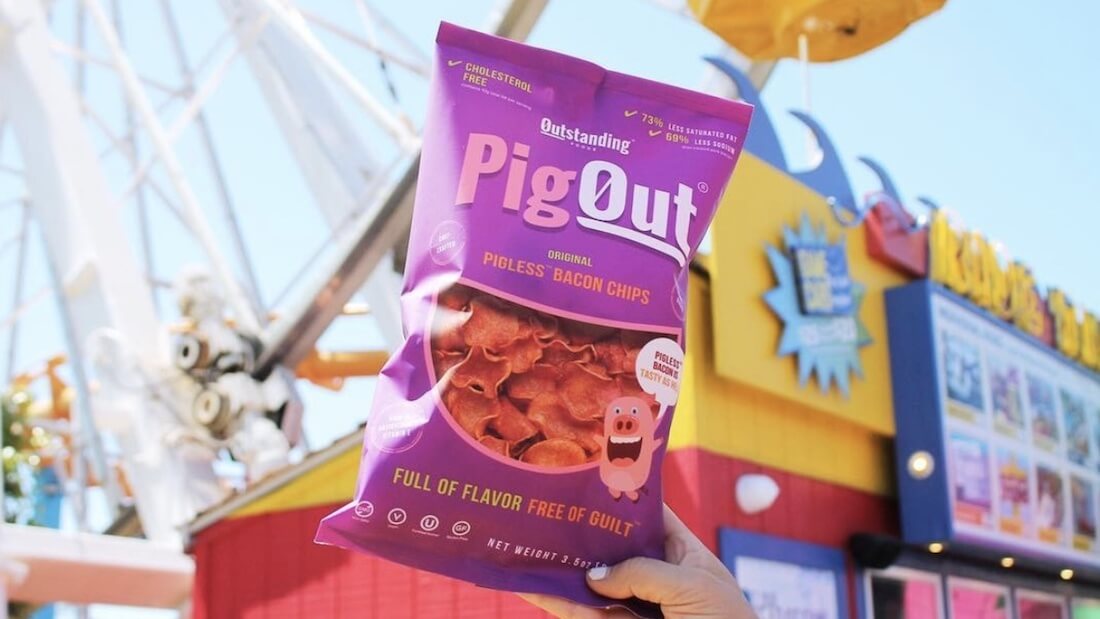 The company is ramping up for the official launch of its premiere product, Pig Out vegan bacon chips. Made from mushrooms, the new product promises that “pigless bacon chips are tasty as hell.” In a recent video that Outstanding Foods shared on social media, the owner of a steakhouse is offered a bag and he loved it so much, he couldn’t help but let slip a few expletives.

“Holy [expletive], it tastes like bacon,” he said. “It tastes like bacon. It’s like a perfectly cooked chip.”  Unable to pinpoint the key ingredient behind the savory vegan bacon chips, he asked if Pig Out chips were made from potato. When he was told that the brand makes its product from mushrooms, he appeared to be in awe of the realistic flavor.  “[Expletive] me… Those are awesome. They’re awesome!”

When your #PlantBased bacon chips get an (uncensored) stamp of approval from the owner of a steakhouse ?????? #PigOutChips pic.twitter.com/Zadh9F67m0

Outstanding Foods was co-founded in 2016 by entrepreneur Bill Glaser and former Beyond Meat chef and JUST co-founder, Dave Anderson with the mission of making vegan food mainstream. The pair decided to start by creating vegan bacon due to the popularity of the pig meat in current food culture. It was Glaser who took the idea a step further by suggesting that they make plant-based bacon chips, due to how easily the product could be mass marketed to vegans, vegetarians, and omnivores alike. “We wanted something really mass market, so we decided to start with snacks. Everyone eats chips,” he said.

Free from all animal ingredients, Pig Out’s pigless bacon chips are also playing into the growing consumer demand for better-for-you-snacks. Outstanding Foods makes its chips from a specific type of mushroom paired with seasonings to create a realistic bacon flavor. “You get the savory, the umami, the saltiness, the sweetness, and the crunch,” said Anderson.

Outstanding Foods is not the only brand to realize that mushrooms can stand in for meat in vegan products. San Francisco-based food startup Terramino Foods aims to create vegan seafood with mushrooms. Vegan chef Derek Sarno, creator of Tesco’s Wicked Kitchen line of plant-based readymade meals, revealed earlier this month that he plans to start a vegan mushroom meat company called “Wicked Meaty” with his brother Chad.

Outstanding Foods has already earned $1.5 million in investments from celebrities, including former professional skateboarder Rob Dyrdek, actor Emily Deschanel, and actor Daniella Monet. Former “Jackass” star and vegan since 2008, Steve-O, who also paid a visit to the company headquarters last May, is also a fan.