Ozzy Osbourne has spoken out against cat declawing. The former lead vocalist of Black Sabbath appeared in a new poster campaign condemning the practice.

In true Prince of Darkness fashion, Osbourne is pictured in black and white, holding up his hands with the top ends of the fingers cut off. His hands are covered in blood. The slogan reads, “never declaw a cat. It’s an amputation, not a manicure.”

Banned in several places around the world—including England, Australia, New York State, San Francisco, and Denver—cat declawing involves amputating a cat’s toes back to the first knuckle. The controversial procedure is to prevent cats from scratching furniture and people.

Many have condemned the practice on grounds of animal cruelty, including Osbourne. He said in a statement, “amputating a cat’s toes is twisted and wrong.”

He continued, “if your couch is more important to you than your cat’s health happiness, you don’t deserve to have an animal. Get cats a scratching post—don’t mutilate them for life.” 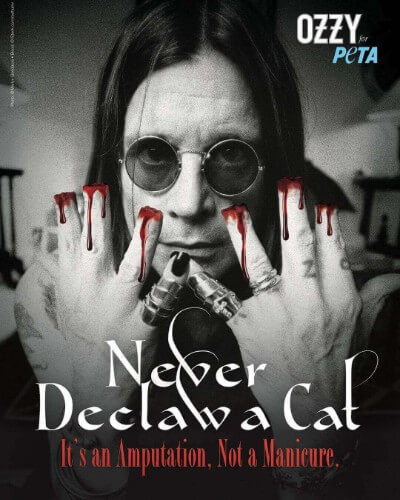 Ozzy Osbourne has spoken out against cat declawing.

Osbourne has a checkered history when it comes to animals. He once famously bit the head off a bat on stage in 1982, although he later claimed he didn’t know the animal was real.

More recently, however, he has experimented with an animal-free diet. He tried out a vegan diet for health reasons in 2011, and it’s rumored he has also given vegetarianism a shot. His daughter Kelly Osbourne is a vegan and wife Sharon Osbourne—a former fur-wearer—is an anti-fur advocate.

In 2015, Sharon said in an anti-fur campaign, “I was educating myself through documentaries on what goes in to actually making these fur coats and fur scarves that I was wearing. When I realized how it was done, I was sickened.” She added, “I was absolutely sickened by it. I had no idea that anyone would want to make a coat out of a cat or a dog.”

Kelly said she went vegan back in June 2018 for health reasons. She posted on Instagram at the time, “I used to think being a vegan was boring. It turns out I have way more fun with food now than I ever did before.”

Since then, she has revealed she gets Oatly’s vegan oat milk shipped from England to her home in Los Angeles. She said on Instagram last year, “Oatly changed my life. I have to go to England to get this. I get it sent to me because it’s sold out everywhere here.”