Pamela Anderson has posed in the nude to promote her new luxury vegan handbag line in collaboration with Ashoka Paris.

The former “Baywatch” star designed the Pamela Anderson x Ashoka Paris collection with designer David Mateo. She has been working with the French brand since January 2019. This collaboration marks the second time Anderson has posed for promotional materials.

“Working on this Vegan bag project with Pamela, a global celebrity and committed activist is an honor and a fabulous experience,” a statement from Ashoka Paris reads. “Behind the star, we discovered an intelligent, approachable, sincere, and creative woman who is brimming with ideas and energy.”

The collection includes four vegan bags made with an apple-based alternative to traditional leather. They are available in four different colors, and first debuted in May. The Pamela Box Nude bag—which retails for €270—also features a pro-activism message on the inside.

It reads: “RESIST! Inside every beautiful person is an activist wanting to defend the planet.”

Anderson has worked with PETA on numerous campaigns. She regularly speaks out about such issues as foie gras, fur, animal testing, and factory farming. 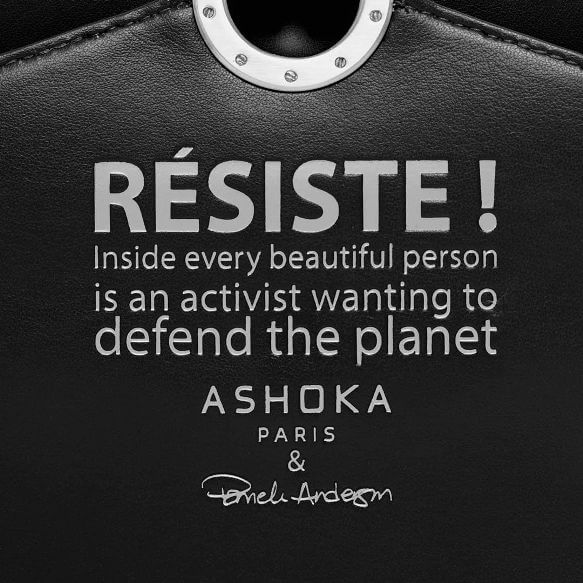 One bag from the new apple leather collection includes an affirmative message about activism.

Anderson is particularly outspoken in her opposition to animal products in fashion. She has lobbied Prada to completely ditch fur. She once sent one of her faux fur coats to Kim Kardashian West, who removed fur from her wardrobe shortly after.

“I think that awareness and education is the most important thing,” said Anderson. “But I will not get in an elevator if somebody is wearing fur, and I will not take a picture with anybody wearing fur.”

“For 25 years, Pamela Anderson has been supporting those who are on the front line,” Ashoka Paris’s statement continued. “The Pamela Anderson Foundation funds the efforts of courageous men and women who inform and defend the planet and all those who live on it.”