The city of Pamplona in Spain has cancelled its annual “Running of the Bulls” event amid the novel coronavirus outbreak.

The event, part of the week-long festival of San Fermín, was scheduled to take place this July.

“As expected as it was, it still leaves us deeply sad,” Ana Elizalde, the acting mayor of Pamplona, said in a statement. “As of today, it seems unlikely that the festival will be celebrated this year, but let’s wait and see how the events evolve.”

“It seems our beloved fiesta is at odds with the coronavirus,” Elizalde continued. “We’re supposed to wear masks, keep a social distance—measures that are incompatible with what San Fermín is.”

Pamplona Mayor Enrique Maya recently tested positive for COVID-19. Spain currently has more than 210,000 confirmed cases of the virus. More than 22,000 people in the country have died from the disease.

The country imposed a strict lockdown in mid-March and closed its land borders to everyone except Spanish citizens and residents shortly after. 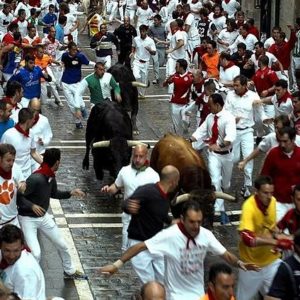 The San Fermín festival is cancelled.

Running Of The Bulls

The festival entails releasing a group of bulls, usually six. Throngs of screaming people chase them throughout the town’s narrow streets over an 875-meter course. Each evening, a bull is forced into a bull ring. Picadors—men on horses—jab the animal with a lance. Banderilleros then stick the bulls with harpoons. The matador then enters the ring and attempts to kill the bull with a long sword. If that doesn’t work, he uses other weapons like daggers.

For this reason, the Running of the Bulls has received major backlash from multiple animal rights groups and activists for its inherent cruelty to animals. Spain has also received criticism for bullfighting, which is still legal in most areas.

The festival is dangerous for its human participants as well. Five people were hospitalized after being non-fatally gored by bulls during last year’s bull run. According to the Running of the Bulls website, there have been 16 deaths as a result of the festival since record-keeping began in 1910.