Panera Bread recently added two new items to their comforting menu: Vegan Lentil Quinoa Broth Bowl and Soba Noodle Broth Bowl with Edamame. For those wondering, there are no animal products to be found in either dish, making these meals not only great for animals but the environment and consumer health too.

This winter has been especially cold. Now, customers can hit Panera Bread for a nourishing broth bowl to warm up from the inside out, which just so happen to be vegan. Contrary to the misconception that vegan food is bland, there’s only an abundance of flavor here!

While it isn’t labeled as such, the Soba Noodle Broth Bowl is also suitable for vegans and uses the same fishless umami broth as the other vegan broth bowl. This bowl comes with soba buckwheat noodles, fire-roasted edamame, sesame seeds and napa cabbage. 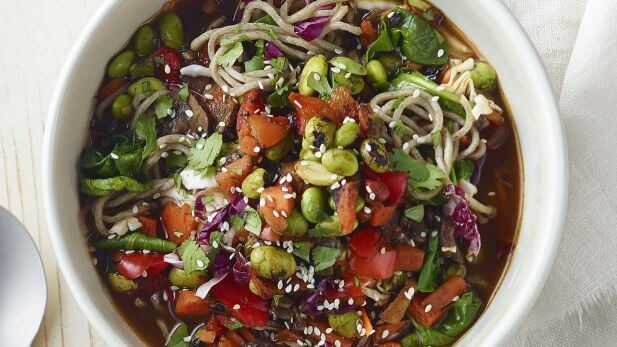 Panera’s menu isn’t a virgin of vegan food. Other options for plant-powered customers include a Vegetarian Black Bean Soup, Mediterranean Veggie Sandwich (hold the feta and sub the bread for sourdough, ciabatta or a French Baguette), Peach and Blueberry Smoothie with Almond Milk and Modern Greek Salad with Quinoa (ask for no feta).

Additionally, those ‘in-the-know’ can order from Panera’s plant-based menu menu via their app, order-in-kiosks or in-house menus – soups, salads, and sandwiches included!