Andy Beerman, the Mayor of Park City, Utah, best known as home to the Sundance Film Festival, is set to take a ten-day vegan challenge and is encouraging the mountain community to join him.

Beerman and his wife have reportedly been considering switching to a vegan diet for some time. The couple have already begun incorporating more plant-based recipes into their diet.

According to local news station KPCW, Beerman says he recognizes the positive impact vegan food has on the environment, personal health, and animal welfare. In just ten days of eating a wholly plant-based diet, one saves 11,000 gallons of water, 400 pounds of grain, 300 square feet of forest, 200 pounds of carbon dioxide and ten animal lives. European scientists, Greenpeace, WWF, the Dutch Council for the Environment, among other independent vegetarian and vegan businesses, such as Beyond Meat, are urging people to reduce their consumption of animal products. 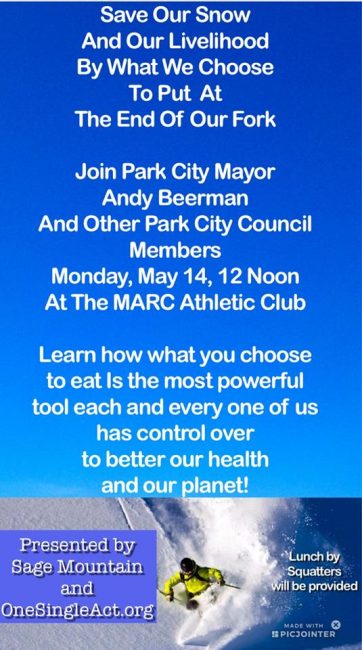 A number of politicians support more vegan options in government buildings and schools. New York City is earning global recognition for its Meatless Monday program in schools and the addition of vegan items to the regular school lunch menus. Similar strides have been made in Los Angeles’ Unified School District with vegan options now in a number of schools. Just north of Los Angeles in Santa Barbara, 50 percent of school meals served are now vegan.

A growing number of government cafeterias, universities, and hospitals all now serve vegan options to meet the demand for plant-based food. California is also considering legislation that would mandate offering vegan options in the state’s prisons. The legislation under consideration follows a similar effort in Pennsylvania where prisoners volunteered to be fed a vegan diet as part of a rehabilitation effort.

Similar to the U.S., across the globe in small and farming-heavy country New Zealand, a vegan diet is gaining popularity in the nation’s 160-year-old Maori meeting ground to improve community health.