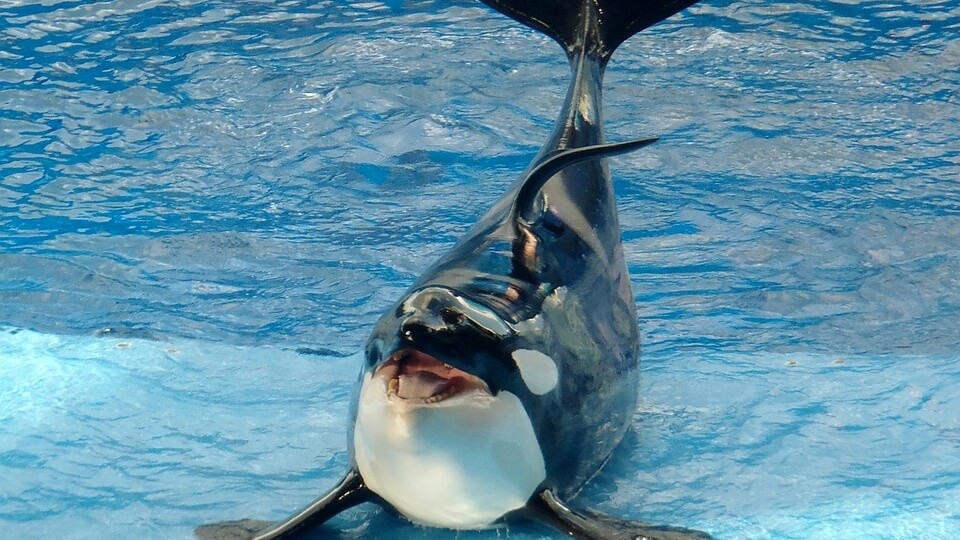 Made in partnership with animal rights organization PETA (People for the Ethical Treatment of Animals), Kaehler’s video highlights just how small the tanks at SeaWorld really are and how depressing the lives of its orcas can be.

The moves include swimming in tiny circles because, as Kaehler notes, in order to equal the amount of swimming a wild orca does in one day, a captive orca would have to swim 4,000 laps around its tank.

Grinding teeth is another move – many captive orcas have dental problems because they “live in such a barren and stressful environment,” notes Kaehler. Crying out for a baby is another, since orcas are artificially inseminated and then separated from their children who are often moved to different parks.

Finally, Kaehler instructs captive orcas to do a cool down which involves “floating listlessly.” She explains, “This is a behavior only seen in captive orcas, never in the wild. That’s because of your chemically treated tank, which is a hopeless and very depressing place.”

“That’s all the moves I can show you,” she concludes. “Because until SeaWorld sends the animals to a seaside sanctuary, that’s pretty much all the orcas at SeaWorld can do…well, besides, dying way earlier than they would in the wild, they could do that too.”

The Decline of SeaWorld

Kaehler’s video reflects the changing public opinion of SeaWorld as people become more aware of the tragic lives these animals lead in captivity.

In the past 12 months, ticket sales and profits have fallen and partnerships with major travel companies and airlines have been cut off. In August, both WestJet and Air Canada severed ties with the park over concerns about the captivity of marine mammals. In February, travel giant Thomas Cook ended all promotion of the company and in July, it pulled ticket sales completely.

“I am clear about the kind of business that we want to be,” Peter Fankhauser, the chief executive of Thomas Cook, said in a statement at the time. “That’s why introduced our animal welfare policy 18 months ago, and that’s why we’ve taken this decision today. And when so many of our customers are so clear in their view, I could not allow our business to ignore them.”