Updated 06.22.20 – People around the world are eating more vegan food than ever before. But what is a plant-based diet like for athletes? The world’s strongest vegan, Patrik Baboumian, shows that plants are the perfect fuel—even for record-breaking powerlifters like him. 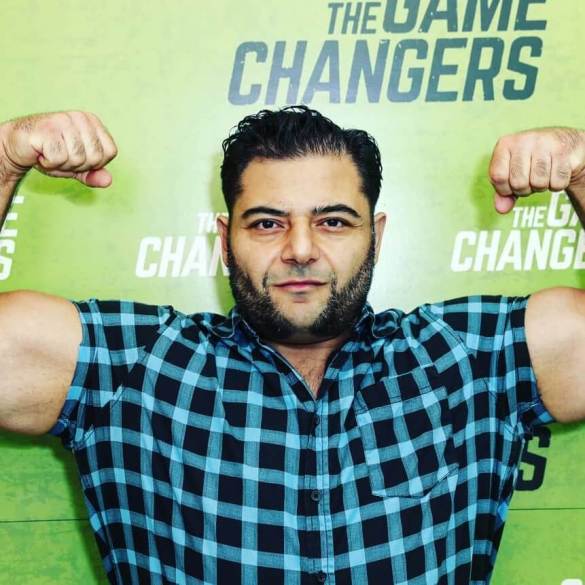 Baboumian is well known for his appearance in The Game Changers.

Who is Patrik Baboumian?

Baboumian is an Iranian-born, German-Armenian retired strongman, former bodybuilder, and self-proclaimed vegan badass. The 40-year-old athlete has competed in and won several weightlifting and strongman competitions during his career, and even broken world records.

Compared to many traditional weightlifters—who often eat copious amounts of eggs, dairy, and meat—Baboumian follows an entirely plant-based diet. He has now been vegan for almost a decade and is a vocal advocate for animal rights.

“I went vegan in 2011,” Baboumian told LIVEKINDLY. “After winning the title of Germany’s strongest man that year as a vegetarian.”

In 2015, Baboumian wrote a book on sports nutrition with his wife Katy Statetzny called Vrebellion. The book aims to tackle the stereotypes about vegan protein and strength, including his personal approach to nutrition.

Baboumian is also well known for appearing in 2018’s “The Game Changers.” In the film, Baboumian and other prominent athletes attempt to dispel the myth that animal products are essential for building muscle.

He has been weightlifting since he was 14 years old, partially because he had a slight figure. In the documentary, Baboumian says he “wanted to be some kind of hero.” He adds that he was first motivated by a desire to be “able to help” people. 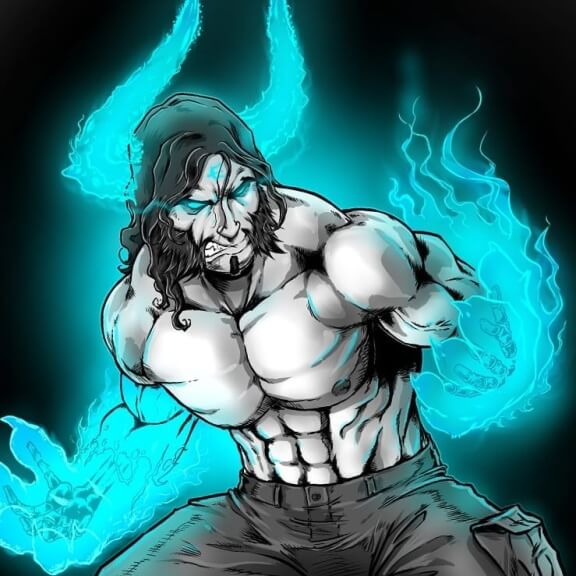 According to Baboumian, his comic is based around the idea of “compassion as a superpower.”

Earthraiser: Voice of the Voiceless

Baboumian is currently crowdfunding on Kickstarter for a vegan graphic novel called Earthraiser: Voice of the Voiceless. He has incorporated elements from his own life to make what he says is a “compelling” story about creating positive change.

After four years of development, Baboumian is working with illustrator David Padilla on the animal rights-themed comic. The project reached its first crowdfunding goal of €12,000 within just a few days of launching. This will support the production of a 50-page limited edition printing of Earthraiser.

If the project surpasses its next goal of €20,000, Baboumian will extend Earthraiser to 60 pages. If it reaches €35,000, the final tier, he will print the comic in hardcover format. Anything beyond the final goal will be used to create a screenplay—the original format for the Earthraiser concept.

“The more I worked on the story the more I realized that it would make sense to present it to the world in form of a graphic novel first before going for the more ambitious plan to turn it into a movie,” said Baboumian.

In the graphic novel, protagonist Wolf Winter undergoes a near-fatal government experiment that gives him superpowers. Able to sense the pain of all nearby and sentient life forms, Winter sets out to end animal suffering.

“My hope is to inspire non-vegans to think about animal rights,” explained Baboumian. “As an activist, my idea was to set up the hero in a way that the general audience who is mostly not vegan will be able to identify with him.” 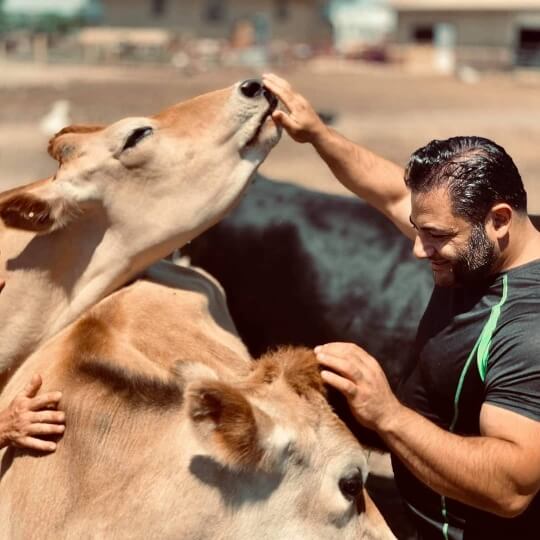 Baboumian is an ethical vegan and adopted a fully plant-based diet for the animals.

Why Did Baboumian Go Vegan?

Baboumian was an ethical vegetarian from 2004 to 2011, when he went vegan for the animals. He said: “I just found myself thinking that if I would have to kill the animals I ate with my own hands I couldn’t because I was too compassionate.”

“I felt that I was fooling myself eating meat considering my inability to kill an animal,” added Baboumian. “So I just thought I’d better be honest to myself and stop eating meat.”

In his 2018 TEDx talk, Baboumian noted that being a strongman who didn’t eat any animal products was unheard of at the time. He has also said that being vegan is the way in which he implements positive change in the world.

Baboumian told LIVEKINDLY: “In a sport where the stereotype is that you need lots of meat to succeed. I realized that my private decision to not eat animals was now influencing other people as well.”

As an athlete, sports nutrition and health is a crucial part of his lifestyle. The plant-based strongman aims to continue to influence other athletes and inspire people to try going vegan.

“It was a hard decision because back then I didn’t know if veganism would work for me,” he added. “But looking back it was the best decision I ever made.”

What Does a Vegan Strongman Eat?

In a video on his YouTube channel, Baboumian explained that he is constantly varying his diet. This is to further optimize his nutrition and performance. Typically, he takes vitamins and supplements with meals three times a day. These include essentials such as B12 and iron.

He also regularly drinks protein shakes with added creatine—a supplement popular amongst bodybuilders and competitive weightlifters. After training, Baboumian typically drinks a smoothie made with fresh and frozen fruit and fresh greens.

For lunch, Baboumian may include high-protein vegetarian foods such as falafel and vegan sausages. For dinner, he enjoys tofu, potato, and vegetables. Peppers are common ingredients in weightlifter’s diets and are low in fat but extremely high in vitamin C.

For Baboumian and other athletes, one of the most important aspects of diet is ensuring enough calories are consumed. Protein is also key for athletes and other sports professionals, a whole foods plant-based diet can be extremely high in protein thanks to foods such as beans, legumes, nuts, green vegetables, and even potatoes.

“I have to make sure my protein and calorie intake is always sufficient,” Baboumian told LIVEKINDLY. “I do that by getting a lot of my calories in liquid form, which is something I have always been doing and is not associated with me being vegan. Otherwise, I rely mostly on legumes and grains to cover my macronutrients.”

“I like Asian, Indian, Persian, and Italian food,” Baboumian added. “But I also appreciate classic American fast food like burgers. It’s great to live in a time where I can still enjoy all these food options in vegan versions and have all the fun with none of the harm associated with non-vegan options.” 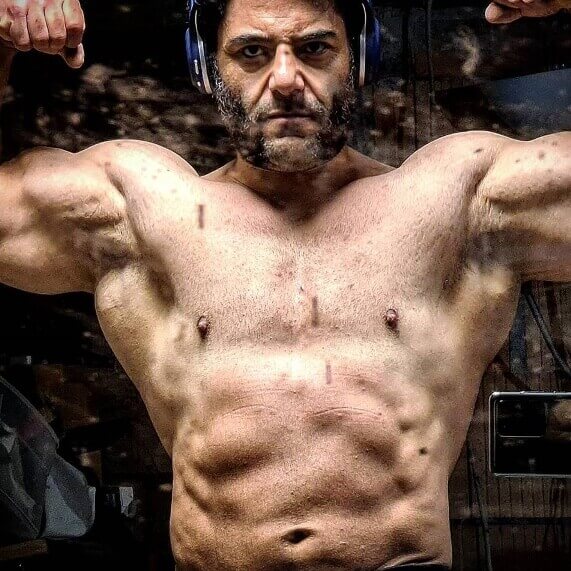 Baboumian was the strongest man in Germany in 2011.

How is Baboumian so Strong?

A number of studies show that plant foods can support improved athletic performance.

Beetroot, which contains nitrates, has been found to increase endurance and lower blood pressure. Spinach is high in both iron and magnesium, while sweet potatoes—a favorite amongst bodybuilders—contain plenty of fiber, carbohydrates, and vitamin A.

In “The Game Changers,” elite special forces trainer and winner of “The Ultimate Fighter” James Wilks acknowledges that athletes eschewing meat is still relatively unexpected. But notes that the global perception of animal products is shifting, including for athletes.

“Athletes do require more protein (and all nutrients) than sedentary people,” they say. “But there is no evidence that they require a higher percentage of protein compared to other macronutrients in their diet to perform more optimally.”

The Journal of the Academy of Nutrition and Dietetics published a study in 2013 comparing the nutrient intake of more than 71,000 people, all following different diets. The study found that, on average, those eating meat-free consumed 70 percent more protein than necessary daily.

In addition to the physical reality of weightlifting, there is also an important mental component. “You can never be stronger than you mentally allow yourself to be,” Baboumian explained to LIVEKINDLY.

“Of course, there are physical limits that will stop you eventually,” he continued. “But most people are rather stopped by the limits they set themselves than by their physical constraints.”

I think my success is mostly driven by my willingness to go against the odds,” he added.
“When someone says something can’t be done, I’m almost automatically tempted to just do it to prove them wrong.”

How Many Records Has He Broken?

Baboumian won the title of German Junior Bodybuilder in 1999 at the age of 20. His current titles include the world record for the under 105kg log-lift with a 165 lift. He also holds the German record for the heavyweight log-lift—which he was won 4 times consecutively.

He was named Germany’s Strongest Man in 2011, the same year he adopted a fully plant-based diet. As Baboumian increased in both size and strength, he started competing in European Powerlifting Competitions.

This enabled him to attain the European Open title in 2012 and set personal bests of Bench 210kg, Squat 360kg, and Deadlift 360kg.

After taking a break from his athletic career to write Vrebellion—and translate it into English—he broke his own previously set yoke-carrying record in the center of Berlin. His new record of 555kg beat his previous record by 5kg and which was set at Toronto Veg Fest.

Baboumian has also held the record for the longest duration holding a 20 kg weight with outstretched arms. His time of one minute and 26.14 seconds, completed in 2012, remained unbeaten until 2017.

He credits his vegan diet with boosting his existing strength, helping him lift heavier and recover faster. “This is a message to all those out there who think that you need animal products to be fit and strong,” said Baboumian at the time.

“There are plenty of plant-based protein sources and your body is going to thank you for stopping feeding it with dead-food,” Baboumian added. “Go vegan and feel the power!”