In the ad, Cruz cradles an orange tabby cat paired with the text: “Make us purr. Don’t wear fur.” PEOPLE reports that the ad was made in collaboration with international animal rights group PETA (People for the Ethical Treatment of Animals).

The ad comes at a time when many top designer labels, including Diane von Furstenberg, Versace, Burberry, Coach, John Galliano, John Paul Gaultier, and Chanel are ditching fur and other animal-based textiles, citing the cruel treatment of animals as the driving reason for doing so.

“Finally, so many designers are going fur-free, and I’m looking forward to the day when no animal is caged or trapped and killed for fur,” the animal rights advocate said in a statement. 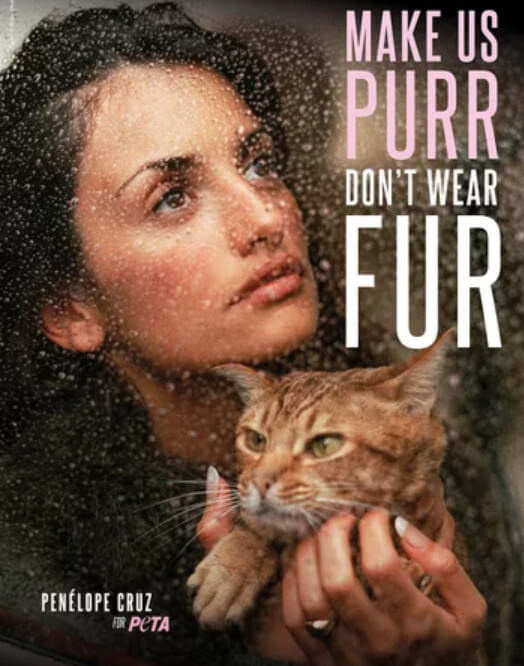 This is not the first time the 44-year-old actor has teamed up with PETA. In 2012, she appeared in another of the organization’s ads that encouraged others to “give fur the cold shoulder.”

The “Volver” star is also known for the love of her pets. According to PETA, Cruz and her husband, Oscar winner Javier Bardem, have opened their home to multiple rescued cats and dogs. Cruz loves her pets so much, she was known for bringing them along on interviews.

A passionate animal lover, Cruz has a firm stance against fur due to the way animals are treated by the industry. She once partnered with Spanish clothing retailer Mango, which banned fur in 2011, to launch a cruelty-free fashion line with her sister.

“I’m strong and opinionated,” said Cruz. “Those qualities brought me a lot of problems since I was a little girl in school, saying, ‘I don’t agree,’ and fighting with the children. It’s part of my curiosity for life.”

Cruz is one of many celebrities to team up with PETA – including Alicia Silverstone, Emma Kenney, Taraji P. Henson, Pamela Anderson, and Wendy Williams – to encourage others to adopt a more cruelty-free lifestyle.