If people had to choose between Greggs’ vegan sausage roll and the original, they’d go meat-free. That’s according to a Facebook poll conducted by the bakery chain over the weekend.

“You can only save one…,” Greggs wrote, paired with a photo of the meat-based sausage roll and the popular vegan version, prompting people to give either a thumbs-up react for the former or the heart react for the latter. The meat-free sausage roll has 67,000 votes as I’m writing this while the classic has 40,000. Fifty-four are mad about it and 17 feel like crying.

Greggs launched vegan sausage rolls last January in response to demand, punctuated by a PETA (People for the Ethical Treatment of Animals) poll that gained more than 20,000 signatures. Despite the expected troll-like reaction from “Good Morning Britain” host Piers Morgan, who called the bakery chain a bunch of “PC-ravaged clowns,” the meatless sausage roll has been a hit. Greggs even credited it for boosting sales to £1 billion.

“Whilst there are significant uncertainties in the months ahead, Greggs has started 2019 in great form, helped in part by the publicity surrounding the launch of our vegan-friendly sausage roll,” chief executive Roger Whiteside told ITV last February.

“We’re not giving out numbers – it’s in the hundreds of thousands – but it is the fastest selling new product we have launched in six years. It’s literally flying off the shelves,” Whiteside continued. 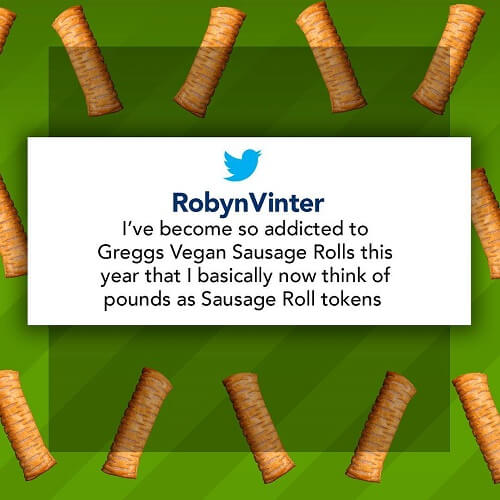 Vegan sausage roll mania is real. In some instances, people were bidding £7 — seven times the regular cost — for one on eBay. Featuring a meat-free Quorn sausage and 96 layers of puff pastry, the plant-based sausage roll is nearly identical to the classic. It also sparked an increased interest in veganism. The BBC noted that there was an influx of dietary and ethics-related questions following the launch, ranging from whether or not vegans wear wool to how to bake a cake without eggs or dairy.

“Like many food retailers we have seen increasing demand for vegetarian and vegan products,” he told MSN last February. According to Whiteside, more vegan options are coming to Greggs in the near future, but he hasn’t said anything beyond that.