Veganism and the public’s investment in vegan products are on the rise, but the portion of the world population following a vegan diet remains modest. Despite its small following, however, there are a vast array of differing opinions within the community as to how to ‘be vegan’ and the best way for vegans to conduct themselves.

Whether for ethical, environmental or health reasons the majority of vegans wish to promote a vegan lifestyle and spread a vegan message. One section of the community in particular comes under scrutiny in this respect: large organizations who are seen to represent the vegan community such as People for the Ethical Treatment for Animals (PETA). The group advocates for a vegan lifestyle and claims to be the largest animal rights group in the world.

PETA recently revealed that they were awarding Oceania Cruises a Compassionate Business Award following the company’s announcement to include a new vegan menu on all six of their ships, offering over 250 dishes. Oceania Cruises will still serve animal products aboard their ships and as such PETA have been criticized for bestowing a non-vegan company with an award. This is not the first time PETA has recognized a non-vegan company this way.

In PETA’s 2016 Vegan Food Awards (UK), J D Wetherspoons, Zizzi and Pret a Manger were all winners. These chain stores have all added vegan options to their menus yet they all still serve meat (aside from one branch of Pret a Manger) and other animal products.

There are many who believe that the addition of vegan items to a menu is a positive step forward. Diversifying menus means that many companies are recognizing the changing eating habits of the public. In addition to this, people who are less able to steer clear of eating at chain restaurants or buying food from large supermarkets are being given the opportunity to follow a vegan diet.

Veganism has often been labelled as a diet for the privileged, despite many vegan bloggers offering tips about being vegan on a budget, and availability of products certainly plays a part in that. Those who work Monday-Friday may be unable to visit smaller, local businesses with short opening hours and oftentimes items bought from these shops come at a higher price. Moreover, just simply having the word vegan appearing more prominently in day-to-day life can bring about a greater awareness of the lifestyle. 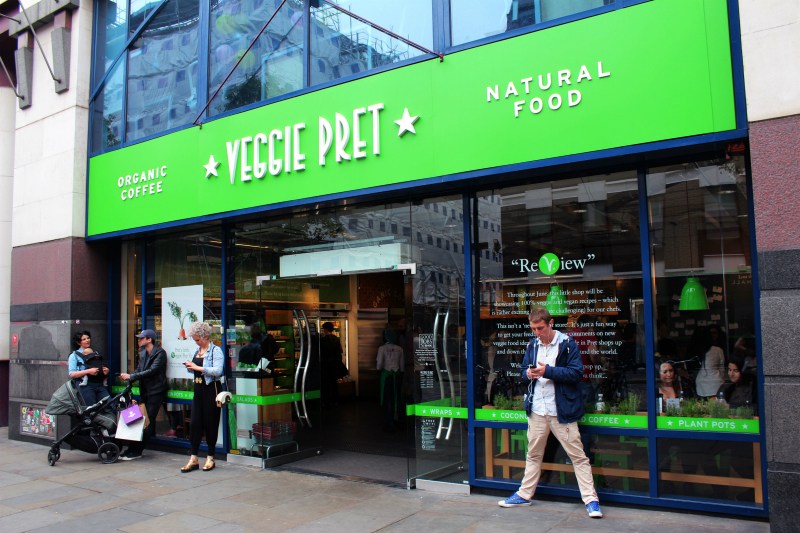 All this, however, does little to justify an animal rights group rewarding these companies for offering vegan food whilst they still contribute to the animal agriculture industry. No doubt these companies have included a vegan option in order to offset any losses they might have encountered should the popularity of veganism continue to rise. Yet providing vegan choices does little to reduce the ethical and environmental damage caused by animal agriculture. In fact, by recognizing these companies and holding them up as examples PETA is suggesting that merely offering vegan food as an option is enough which for many vegans it simply is not. Furthermore, there are many unrecognized businesses that operate on an entirely vegan basis who might be more deserving of such recognition.

As the world’s largest animal rights group and a representative of the vegan community, PETA should be rewarding changes that make a difference not handing out awards to large companies for modifying their marketing tactics.