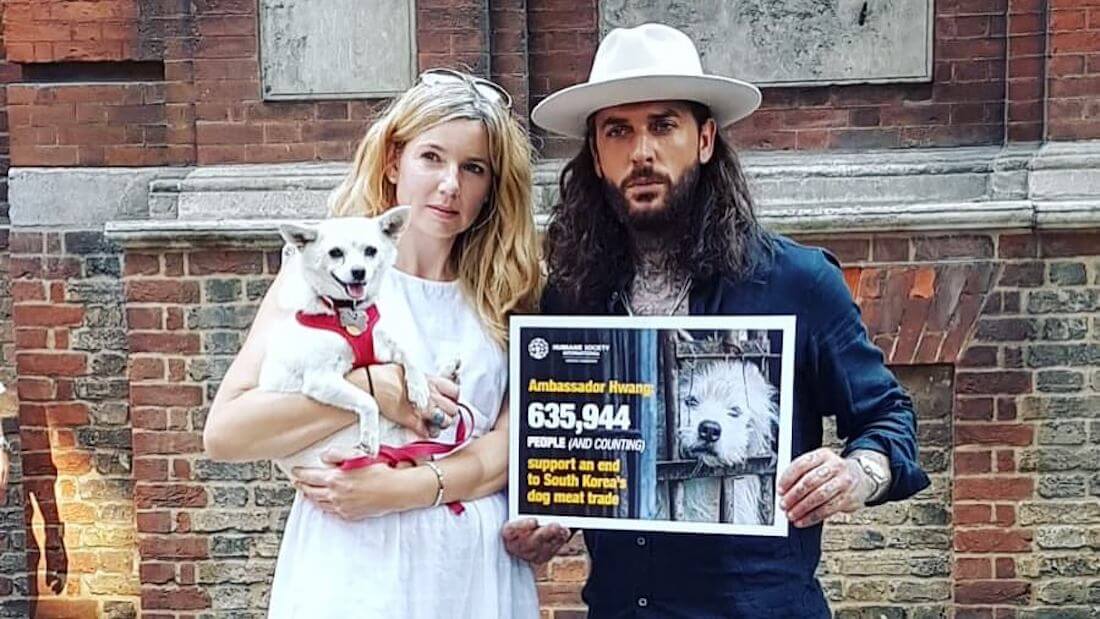 In conjunction with animal rights organization the Humane Society International (HSI), the trio recently delivered a petition to the South Korean Embassy in London. Signed by nearly 700,000 people from around the globe, the petition requests that South Korea ban the dog meat trade for good.

Its deliverance coincides with Bok Nal (thought to be the hottest days in South Korea) during which dog meat soup is traditionally eaten. The petition will remain open until the close of Bok Nal in August, when HSI, along with Korean Animal Rights Advocates, will deliver the final tally to the Blue House in Seoul, the residence of President Moon Jae-In.

The president himself has spoken out against the dog meat trade in the past, promising in his election campaign to do what he can to phase it out completely. He has even lent his own rescue dog to an anti-dog meat campaign, led by animal rehabilitation organization Coexistence of Animal Rights on Earth.

Wicks, Egan, and Thomson were also accompanied by rescue dogs during their trip to the Embassy; Bindi, Charlie Brown, Roxy, Elsa, Faith, George, and Sophie were all saved by HSI and the celebrity trio on two separate farm closures. The experience was unforgettable, says Wicks, claiming he is still haunted by the “horrors” of what he witnessed. “The dogs here today are the lucky few, there are still millions of dogs languishing on dog meat farms across South Korea, but there is real hope that this terrible trade could soon come to an end,” he said in a statement.

“As this petition showcases, there is huge opposition to the dog meat trade both within South Korea and across the world,” he added. “We now need the Government to act and put the vital legislation in place to ensure that no more dogs are killed for human consumption.”

Egan added, “My visit to a dog meat farm was a truly shocking and harrowing experience, so it is a heart-stopping moment to see these beautiful dogs away from the horrors of these meat farms and allowed to be what they truly are — our greatest companions.”

To add a signature to the petition, click here.