LIVEKINDLY
Home Celebrity Pig Beats Cancer With Help From 1,000s of Fans (and a Few... 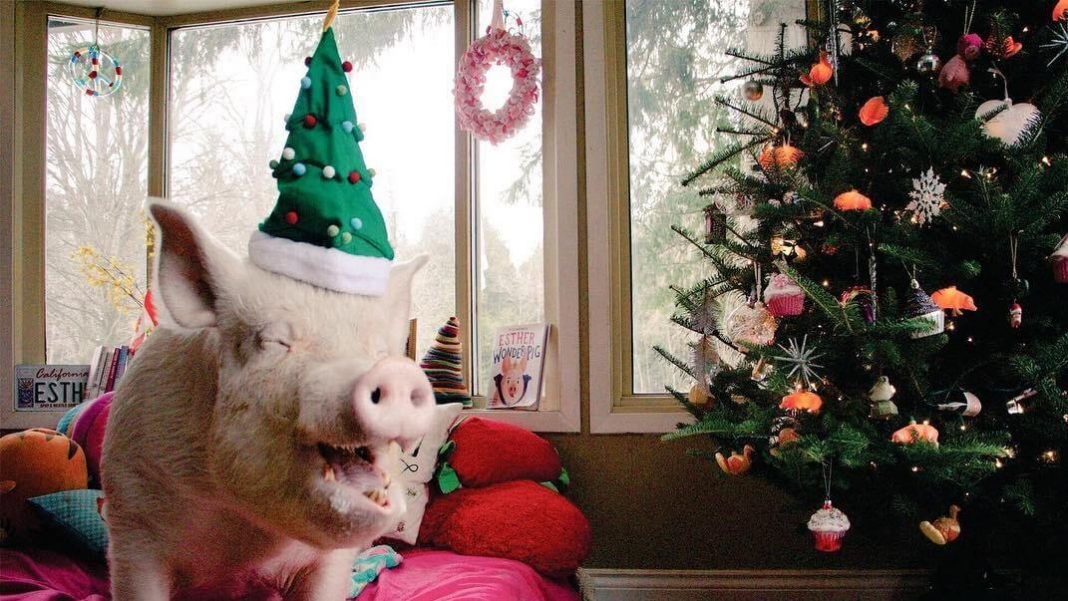 There are vegan Instagram celebrities — and then, there’s Esther. The not-so-micro pig adopted by Canadian couple Derek Walter and Steve Jenkins grew to over 600 pounds. Not only did Esther force Walter and Jenkins to buy a farm to house her and dozens of other rescue animals, but she helped them to go vegan, too. And they wrote a book about it.

In the 2017 book “Esther the Wonder Pig,” Jenkins recounts how one day he was cooking bacon while Esther was in the kitchen and it essentially turned the family vegan overnight. Esther became an Internet sensation. She now has more than 1.4 million followers on Facebook, and nearly half a million on Instagram.

Esther cuddles like a puppy would, sneaks treats out of cabinets, and loves belly rubs. Like any respectable young lady, she loves to dress up in fancy clothes and eat cupcakes. She’s also helped to evolve the global conversation on animal sentience. Pigs, in particular, are extremely intelligent animals–some studies suggest they’re smarter than dogs — yet millions suffer and die in horrific factory farm conditions every year.

Earlier this year Esther battled some serious health issues. And livestock laws in Canada nearly prevented her from receiving life-saving treatment. But her fans and friends rallied to help get her the surgery she needed. She’s now on the mend and was willing to chat with me via email (with a little help from her dads).

Hi Esther, how are you doing today?

Hello, LIVEKINDLY! I’m pigtastic, pigtraordinary, and feeling very festive today! I love this time of year because who doesn’t love receiving presents and sampling baked goodies! Of course, my dad’s creations all have to have the burnt parts scraped off, but Grandma is a whiz in the kitchen and brings me lots of treats.

Aw. Sounds tasty! How are you getting ready for the holidays?

Well, I’ve got some beautiful new frocks to share with my online audience! Fans have sent in handcrafted dresses, a new coat, and even a spectacular new hat to wear during this festive season. And thank goodness as I’ve lost a lot of weight, my old clothes were swimming on me. And of course, I helped my dads decorate our Christmas tree with countless cupcake and pig ornaments, sent in from fans all over the world. The only problem is the tree is right beside my mattress and looking at those glistening cakes makes me hungry.

I know the feeling! What does Christmas at Esther’s farm look like? What will you eat? Who will be there?

Christmas is a very special time at Happily Ever Esther Farm Sanctuary. Our barns are all decorated with greenery and twinkle lights, Christmas carols play 24/7, and our aging pig Leonard who has lost the use of his back legs, he gets to watch special Christmas movies on his in-stall television. As he can’t get out into the world, my dads brought the world to him.

And on Christmas morning all of our residents receive special breakfast bowls with some extra goodies like seasonal cranberries, and perhaps a special sweet treat. And Daddy Derek always dresses up like Santa for them.

In our home, dads’ families come over, and I make sure to greet everyone with a big, wet snout kiss and search their pockets for my gifts. And everyone enjoys a complete “Esther approved” Christmas dinner. There are so many plant-based products now that everyone can enjoy their Christmas favorites, but they are made just a little bit differently.

Do you have any special requests into Santa?

Early in the month, I asked Santa for a new couch, as our present one has some saggy springs where a certain someone has put some extra weight on the cushions. (Daddy Steve really needs to go on a diet), some snacks for my security guard Cornelius the turkey, and some new toys for my canine brother. I even asked that my wily feline sister Delores receive a new bed and some clippers for those little furniture scratchers of hers. I also asked Santa to fulfill our Sanctuary residents’ ‘Secret Santa’ requests, to help build a new barn this spring and contribute to our residents care.

We didn’t put an Angel on our tree this year, it wasn’t big enough to hold me up.

Sounds like it’s going to be a special holiday for you. We heard you’ve been having some health issues lately. How are you feeling?

I’m definitely in the pink now! I’m proud to say I beat cancer; I had four breast cancer tumours removed, and then went back in for a second procedure for spaying to help prevent any future recurrence. And I have a scar that one of my online fans pointed out to my dads, looks just like the scar on Harry Potter’s forehead! Apparently, I truly am invincible and magical, too!

You sure are, Esther! Any updates on your condition you’d like our readers to know about?

And I want to send a shout-out to the amazing staff at the Ontario Veterinary College’s large animal clinic. I received top-notch care but I wish they would lose the “off feed” sign that they hand on my stall before a procedure.

What’s been the hardest part of your health crisis?

Aside from seeing the worry on dads’ faces — and of course the “off feed” situation I mentioned earlier — I would have to say it was the struggle to get a diagnosis. Before we managed to get the CT Scanner, the equipment available in Canada wasn’t large enough to accurately diagnose an animal of my size, or anyone larger, obviously. It was a very long and hard process to see that project through, so not just for me, but any large animal in Canada would have access to proper diagnostic imaging equipment.

Your fans seem to have really rallied behind you during all of this. How has that felt?

It has been extremely humbling. In addition to the thousands of donations that were made from all over the world to enable the purchase of the CT scanner, I got hundreds of get well cards with little notes, flowers, even edible arrangements. It was so nice. I would not be here today without the unwavering love and support of my fans, they motivate me more than anything else….aside from baked goods….and knowing they had my back when I needed them was really overwhelming. I had a terribly hard year, on one hand. But I also saw a level of support and kindness during my darker days that gave me a lot of hope. Sometimes we forget how many good people there are out there, and it takes something scary to remind you that there is still plenty of good in the world.

We should all try to slow down and spend more time with friends and family. Make lots of fun new memories, and eat as many “Esther Approved” vegan cupcakes as you can.

100% with you on that, especially the cupcakes. What are your plans for the new year? Are you making any resolutions?

My resolution is to continue to share my story and my passion for living an “Esther approved” lifestyle, and to help others realize that there is a kinder way.

We want to grow our Sanctuary, and use our platform to assist and educate people. Dads receive daily intake requests for countless farmed animals, from all over the world.

We also want to keep shining a light on the misconceptions surrounding “mini-pigs”, and having them as companion animals. Pigs are abandoned at alarming rates. We get messages on a daily basis from people looking to surrender their pig, more often than not due to behavioural, or zoning/by-law issues. We do our best to help solve the problem, but if it’s a situation that’s out of our/their control, we use our “Esther’s Army” Facebook page to assist in finding a new forever home.

Esther’s Army and its vast network of supporters and Sanctuary contacts save and re-home hundreds of animals every year.

And 2019 is already jam-packed with projects including a new barn at my Sanctuary, plans for a cookbook, and even a Hollywood feature film! (My performance rider is going to ask for a pink chaise lounge, pink shag carpet, and cupcakes galore). The film is an amazing opportunity to introduce to people to my unique family. Bringing the “Esther Effect” to a whole new audience, and helping people realize that we are incredible, intelligent animals. Not just a product, or a piece of pork.

Thank you, Esther. It’s been a pleasure.

[Interview edited for length and clarity.] All images courtesy of Esther the Wonder Pig.