Pigs may be more intelligent than originally thought, as they have been spotted using tools.

According to a study published in the journal Mammalian Biology, Visayan warty pigs — a critically endangered species native to the Visayan islands in The Phillippines — were recently spotted using tools to dig a nest.

Priscilla the pig — who lives in a Parisian zoo — used sticks to dig and build her nest, according to researchers.

Conservation ecologist Meredith Root-Bernstein — who co-authored the study — accidentally came across Priscilla and her digging skills. She wrote in her observations, “[Priscilla] would deposit some leaves, move them to a different spot on the mound, and dig a bit with her nose.”

“At one point she picked up a flat piece of bark about 10 cm x 40 cm that was lying on that mound, and holding it in her mouth, used it to dig, lifting and pushing the soil backwards, quite energetically and rapidly,” she continued.

Root-Bernstein returned to see Priscilla on a number of occasions, together with a team of researchers. They also spotted Priscilla’s mate Billie digging with a stick, although he wasn’t as skilled as Priscilla.

According to the study, the pigs seemed to use the sticks simply because they enjoyed using them, as digging with their hooves would have been more efficient.

Root-Bernstein told CNN, “we might think that only humans manipulate the environment to affect their own lives, but in different ways, many other species do this too.” 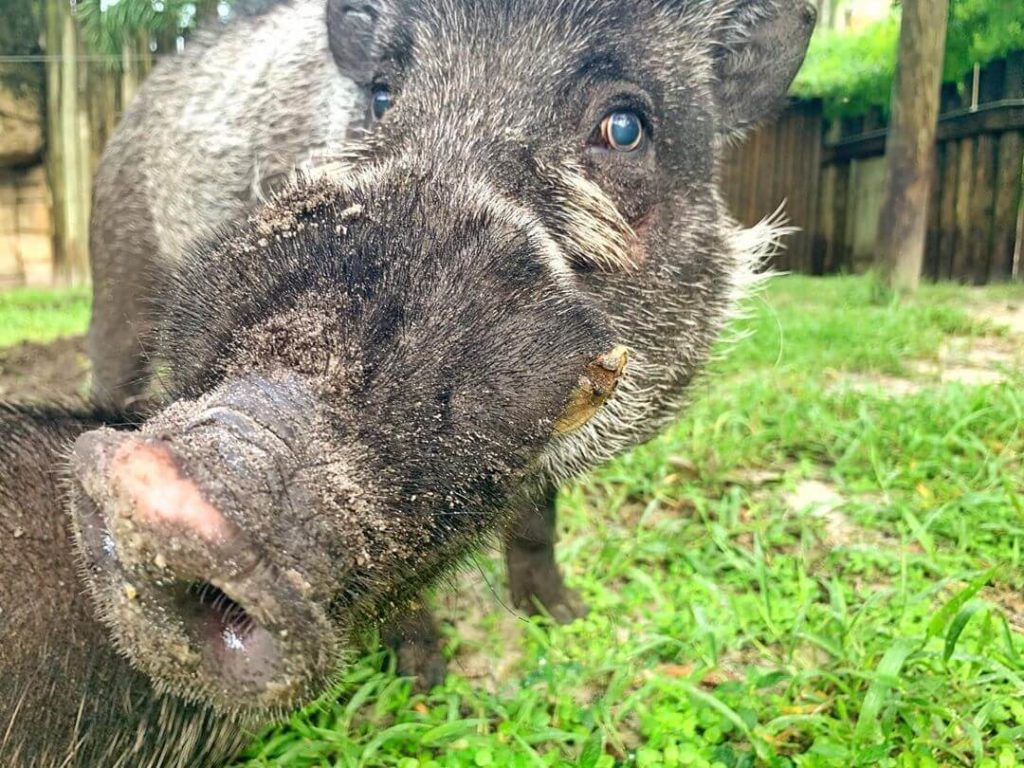 Pigs Use Tools, and They Play Too

Around 200 Visayan warty pigs are now kept in captivity. Filipino conservation nonprofit the Talarak Foundation is working to protect the species and help them to flourish in the wild.

President of the Talarak Foundation, Fernando “Dino” Gutierrez, once witnessed wild pigs push a rock towards an electric fence to test it.

“As soon as they push and the rocks make contact, they would wait for the clicking sound or absence thereof,” he told National Geographic. “Clicking means the wires are hot, and they will back off and not cross. No sounds means it is safe to investigate what’s beyond the wire.”

Pigs don’t just use tools, they like to play too.

A piglet called Baby Mango fell off a truck in Ottawa earlier this year. Following surgery, he moved to a vegan sanctuary called No Meat and Greet. Despite his injuries, he likes to run around and play.

Dr. Lara Elizabeth Cohen — the vet who arranged for his surgery — told Ottawa Citizen, “it’s difficult to keep him caged because he likes my dog’s toys and he has taken over my dog’s bed.”