The Cavolo Verde, a thin and crispy pizza with kale and black garlic, the Trifolata, which features rosemary and wild mushrooms, and the Giardiniera, with asparagus, roasted pumpkin, and basil pesto, will all feature the new vegan cheese. “We continually explore thoughtful alternatives to help protect our planet and we encourage everyone to think about the right choices and adopt small steps to make a big difference,” John Lui, International Brand and Marketing Director at Pizza Express, told Green Queen.

Hong Kong and most of Asia, particularly China, is known for its high rates of meat and dairy consumption. In fact, last summer it was reported that Hong Kong citizens eat more meat per person than anywhere else in the world. However, many individuals and companies are trying to change that. The Green Monday initiative, led by entrepreneur David Yeung, has seen great success in the region, with the number of veggie and vegan options and restaurants in Hong Kong increasing as a direct result of the campaign. Green Monday’s new partnership with LIVEKINDLY is also promising in terms of curbing Hong Kong’s animal product consumption. 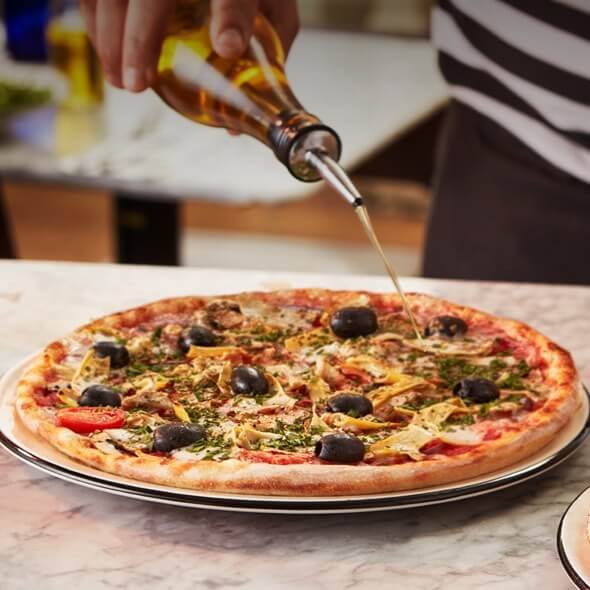 “Our goal is to empower readers through positive news about campaigns just like this. The scale of meat consumption across many Asian countries is high, and drastically affecting our planet’s natural resources, our personal health and the lives of billions of sentient beings,” founder and CEO of LIVEKINDLY, Jodi Monelle, stated. “I hope that our partnership will play a role in solving these issues by helping Asia to buck the trend of Western eating habits.”

Beyond Meat, creators of the bleeding beef-like plant-based burger the Beyond Burger, has also set its sights on transforming habits in Hong Kong and Asia; and so far, the company has seen success. Reports in February noted that sales of the burger had quadrupled in the region over the previous year.

“There should be no trade-off between food taste satisfaction and personal well-being,” said Yeung about the launch of his new brand Right Treat and its first product, Omnipork, a vegan pork product aimed at the Asian market. “Consumption and enjoyment of this generation should not become liability and suffering for future generations and other beings.”