Founded in Kansas back in the 1950s, Pizza Hut has turned into an international success. With more than 18,000 locations worldwide, it’s one of the biggest pizza chains in the world. The chain is loved for its deep-dish Italian-American style pizzas, as well as its unlimited salad bar and its wide range of sides and desserts. In the last few years, it’s become a haven for vegans too—particularly in the UK and Australia. Here’s your guide to all the vegan menu options at Pizza Hut. 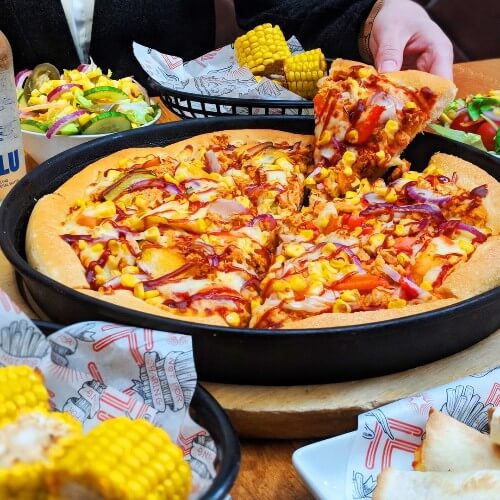 Pizza Hut launched vegan cheese across the UK back in 2017, after “an amazing customer response” to its initial trial. It was one of the first Italian-American style pizza chains in the country to add vegan cheese to its permanent menu. Its main rival, Domino’s Pizza, is yet to add dairy-free cheese to the menu in the UK, although it has conducted trials.

In Australia, Pizza Hut launched vegan cheese in 2018. At the end of 2019, the option became available at every location in the country. Pizza Hut U.S. is yet to roll out vegan cheese. Rumors that the dairy-free option was on the way started swirling in 2019, however, the chain soon put these to bed.

A Pizza Hut representative told LIVEKINDLY at the time: “While we’re proud of our dedicated vegan menu in the UK, the report is inaccurate and we have no plans at this time to carry vegan cheese at our U.S. locations.”

In the UK, Pizza Hut offers Violife vegan cheese and in Australia, Dairy Free Down Under vegan cheese is available. Aside from cheese, there are a number of vegan options available at Pizza Hut. Here’s everything you can order that’s completely animal-free, from nuggets to cheesecake. 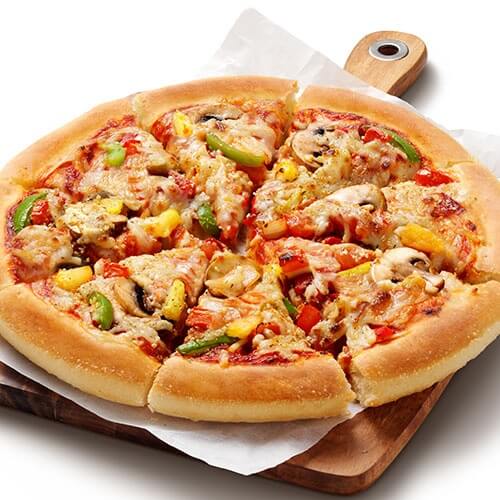 If you’re going to Pizza Hut, chances are you’re after one thing and one thing only: pizza. If you’re in the UK, you can choose from a number of veggie-topped pizzas with vegan cheese. Try the Vegan Veggie, which features spinach, sweetcorn, peppers, red onions, and mushrooms. Or you could opt for the Vegan Hot ‘n’ Spicy Veg, or the Vegan All About Mushrooms, which is topped with garlic and closed cup mushrooms.

If you’re located in the U.S., you’re not totally out of luck. While you can’t order dairy-free cheese, both the Thin ‘n’ Crispy and Hand-Tossed crusts are vegan. If you’re located elsewhere, ask your local branch if there are any bases suitable for vegans. Then, order your pizza cheese-free and add all the vegetable toppings you like. 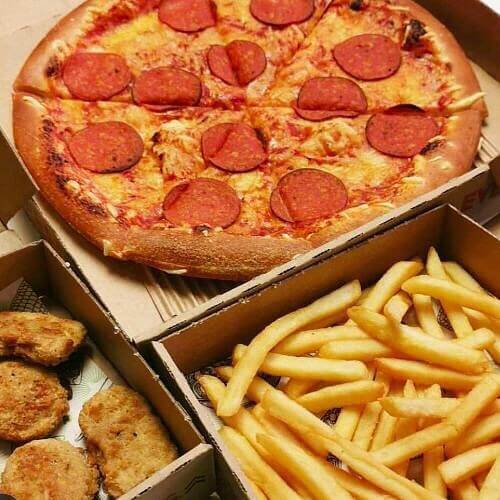 One store in the U.S. recently trialed a vegan meat topping. A location in Phoenix, Arizona launched the Incogmeato pizza—topped with vegan Italian sausage—for a limited time only. 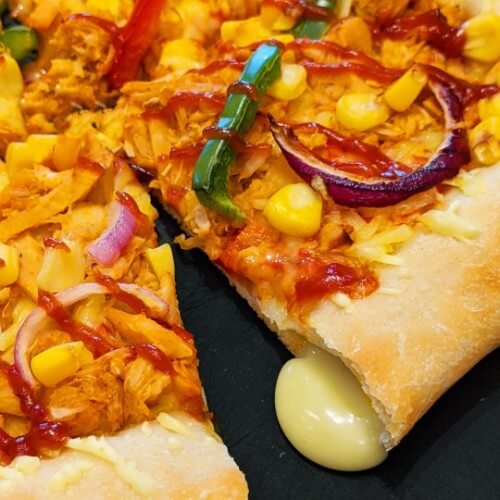 Earlier this year, Pizza Hut UK upped its vegan game with the launch of Violife stuffed crust. “We’re always looking into new and exciting ways to develop our menu,” said Ciara Grace, Pizza Hut’s senior menu innovation manager, in a statement earlier this year. “The Vegan Stuffed Crust was naturally the next step for us to grow our plant-based offering at Pizza Hut restaurants. We’re really excited to launch the Vegan Stuffed Crust as we’re confident it’s going to be a hit.” 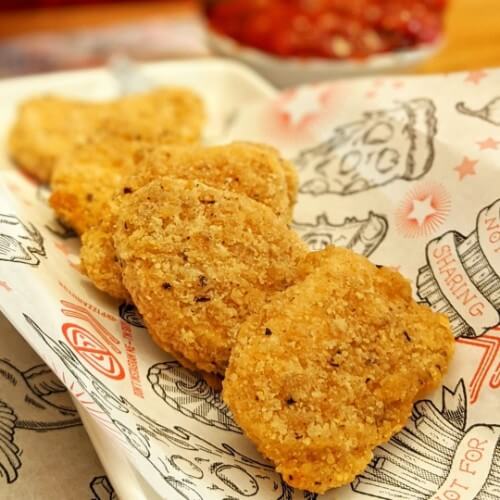 Pizza Hut UK’s Southern Fried Nuggets are made with Quorn.

Pizza is all well and good, but arguably, sides are just as important when it comes to getting the full Pizza Hut experience. Lucky for nugget-lovers, Pizza Hut UK added Quorn Southern Fried Nuggets to the menu last year. Quorn makes its vegan meat with mycoprotein, a form of protein derived from a fungus that has a similar taste and texture to chicken. 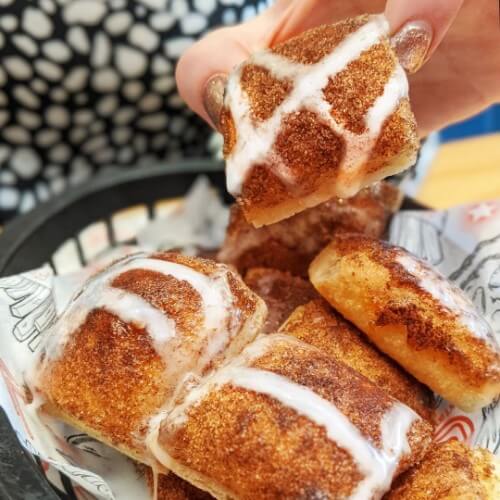 If you are still hungry after demolishing your pizza, Pizza Hut UK also offers vegan-friendly Cinnamon Bites. Customers in the U.S. can order the chain’s Cinnamon Sticks, which are sprinkled with sugar and cinnamon. Ask about the frosting though, as that sometimes contains dairy. 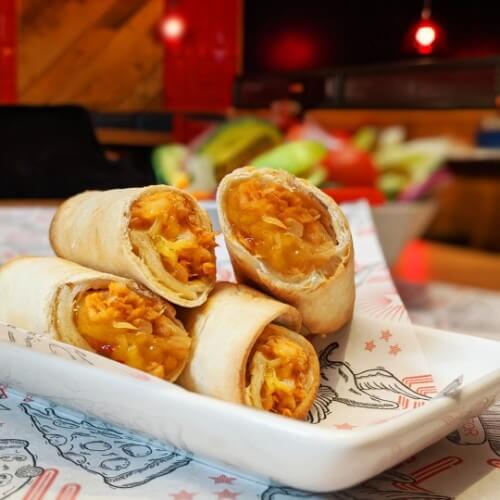 Not content with just jackfruit on your pizza? Pizza Hut UK offers Jack ‘n’ Rolls too. The tasty side snack is filled with jackfruit, vegan cheese, barbecue, and sweet chili. 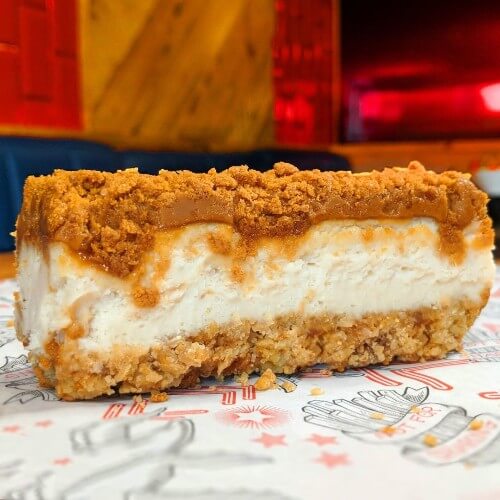 Vegan cheesecake is on the menu at Pizza Hut UK.

Just like the title suggests, you won’t believe the I Can’t Believe It’s Not Cheesecake is vegan, because it looks and tastes just like dairy. Caramel-flavored with a classic biscuity base, Pizza Hut calls it “the dessert of dreams” (so make sure you leave some room). 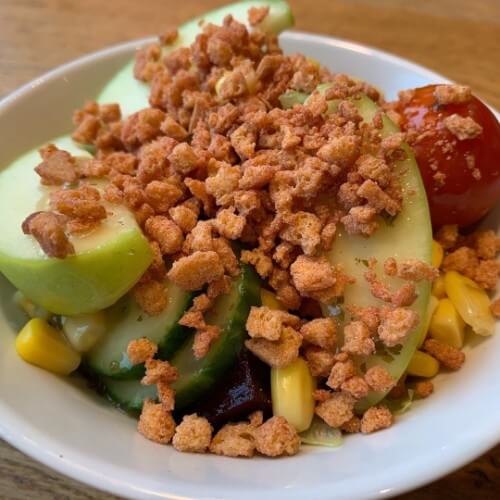 Not every Pizza Hut location around the world still offers the salad bar, but in the UK at least, you can expect to walk into one of the chain’s restaurants and see the unlimited buffet ready and waiting. Vegan options include all of the veggies (obviously), undressed slaw, low-fat french dressing, sweet chili sauce, and even the “bacon” bits. 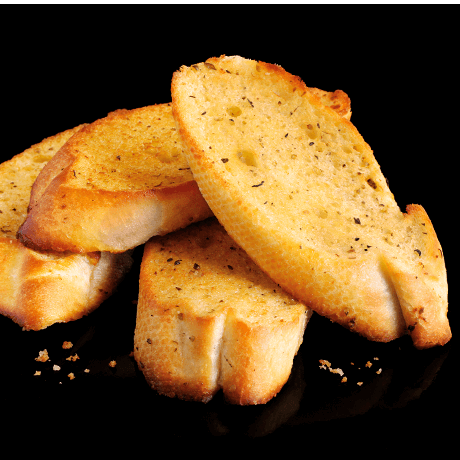 Vegan garlic bread is on offer at Pizza Hut Australia.

In Australia, customers can get their hands on vegan Garlic Bread, and arguably even better, Vegan Cheesy Garlic Bread topped with melted dairy-free mozzarella. 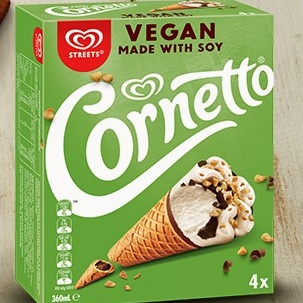 Ordering online? Why not add a box of vegan vanilla ice creams to your order, too? Customers in Australia can get their hands on a box of four “creamy, crunchy” soy-based Cornetto ice creams. In the UK, dairy-free Raspberry Ice sorbet is also on the menu. 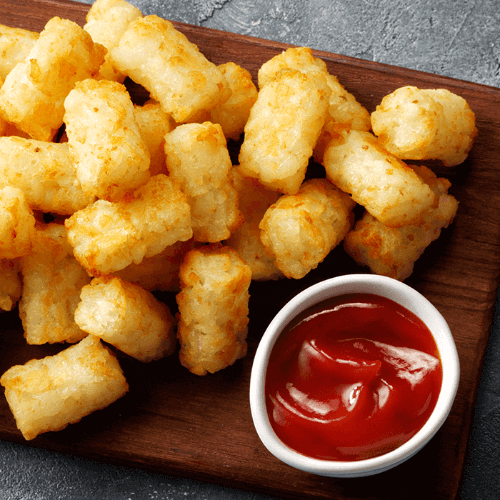 Pizza Hut Australia offers Spud Bites, which are essentially little crunchy bite-sized chunks of potato served with a tomato dip. In the U.S., customers can order French fries. Other locations, including those in Spain and France, serve potato wedges.