Burgers made with vegan meat by Swedish brand Oumph! are now on the menu at Hilton Hotels across the UK.

Oumph! made the announcement towards the end of 2018, writing on its Instagram account, “[Hilton Hotels] has launched an Oumph! Burger on their menu [nationwide] in the UK. How awesome?”

The new addition follows on from London-based Thai chain Busaba’s decision to incorporate Oumph! vegan meat onto its menus. The chain has served Oumph! in the form of plant-based calamari, a vegan version of a Busaba classic, since early 2018.

The vegan calamari (Thai Soyamari) was part of the restaurant’s spring menu, which owners claimed was thirty percent vegan.

The standard menu includes a small section for vegetarians and vegans, though these dishes are all vegetable or tofu-based. The Soyamari is the restaurant’s first venture with vegan meat. The dish is wok-tossed with a ginger and green peppercorn sauce, as is its animal-based calamari.

Oumph! is a Swedish company that produces a range of vegan meats and, as of late February, vegan pizzas. Each product is soy-based then cooked and seasoned to replicate specific cuts and flavors of meat, such as Kebab Spiced, Pulled Oumph!, and The Chunk.

Oumph! vegan meats are widely available in retailers and restaurants across the Nordic countries, and the product is rapidly expanding into the UK. Whole Foods UK was the first to carry the product, followed by Tesco. Oumph! is actively working to expand its UK presence in additional markets and restaurants. 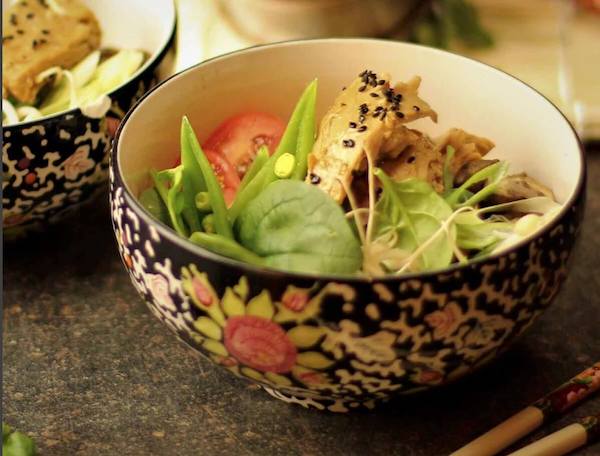 Oumph! products have gained much praise from chefs and influencers. Chef Derek Sarno, cookbook author and Director of Plant-Based Food Innovation at Tesco, said, “When I tasted Oumph! for the first time, I knew directly that it would fit perfectly with Tesco.”

Further, blogger, Fat Gay Vegan, wrote in a post, “[Oumph!] is one of the finest vegan meat products on the market.” He continued, “I was blown away by the versatile nature of the food.” This versatile nature means there is no need to create new dishes to accommodate the product. Like Busaba, chefs can veganize many of their best-selling menu items by replacing the animal meat with Oumph!.

Many vegan meat companies have found success in supplying to restaurants. This tactic allows the restaurant to cater to a larger customer base by providing a vegan-friendly option. Further, it gives the company more exposure to potential consumers. In the US, the Beyond Burger and the Impossible Burger have infiltrated the restaurant world. Between the two, the burgers are available in thousands of non-vegan upscale restaurants, pubs, and casual chains nationwide.