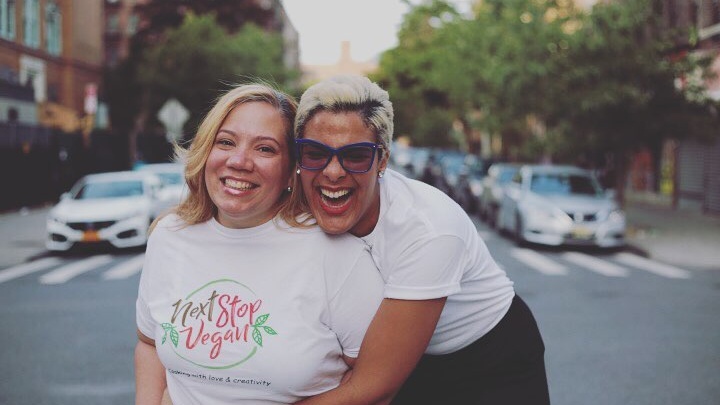 Founded by Blenlly Mena, and run with help from the whole family, Next Stop Vegan prepares Latin-inspired plant-based meals that are delivered to customers every Sunday — both a five-day meal plan and a ten-day meal plan are available.

The best selling item on the menu, according to Next Stop Vegan, is the Vegan Chimi Burger. Made with onions, peppers, scallions, chopped beets, quinoa, smoked paprika, and more, the Dominican-inspired recipe has impressed many. One review on the Next Stop Vegan Facebook page says, “the best I’ve had in my life it taste just like a real burger omg.”

But it’s not just the Chimi meat-like burger winning over residents. So far, the whole menu has received rave reviews. “Their food is amazing! I am in love with their menu,” said one Facebook user. Another added, “I just tried [Next Stop Vegan] for the first time this week! I have already recommended it to friends!! I loved my first batch of food everything was fresh, healthy and flavorful…and that is hard to do all at once but NSV has got it covered!”

Writing on its Facebook page, the meal plan service highlights its five key values – to be conscious, to be unique, to be convenient, to be delicious, and to care. It notes, “Our vision is driven by the care we feel for our clients as well as the planet on which we live. We hope this shines through in everything we do.”

However, Next Stop Vegan isn’t the only compassionate business in The Bronx. The borough is also home to Juices For Life, a vegan juice bar owned by the rapper Styles P. The musician started the bar in a bid to encourage members of the community to make healthier choices for their bodies. He said in an interview in March, “If the community is eating right, it leads to bright ideas, betterment, and enlightenment.”