The last few years have seen a new age of vegan food. Now, if you’re giving up meat, you’re likely only giving it up in favor of products that look, cook, and taste like meat. Only, instead of animal flesh, they’re made from vegetables, nuts, or beans. A new report says vegan meat is set to reach $140 billion in sales by 2029. Even major meat companies— including JBS, Tyson, and Cargill—are getting involved; 80 percent of the top meat producers are now making vegan food, too.

Across all ages and demographics, people are learning about the health consequences of eating meat, in particular the health and environmental impact of red and processed meat. The former is classified by the World Health Organization as a Group 2A Carcinogen and the latter is a Group 1 Carcinogen. That’s the same category as tobacco and asbestos.

In the last few years, the link between meat production and the climate crisis has become well documented. In 2018, the United Nations Environment Programme labeled meat consumption as the “world’s most urgent problem.” In the same year, the biggest-ever food production analysis said that going vegan is the single-biggest thing a person could do to reduce their impact on the planet.

The meat industry is responsible for a multitude of dangerous environmental issues, including high greenhouse gas emissions and deforestation. 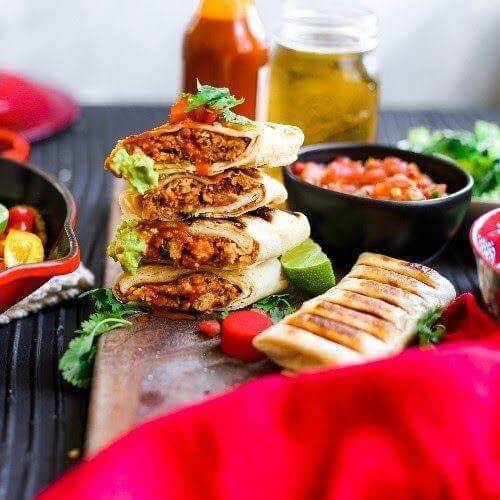 Brands like Alpha Foods are catering to consumer demand for vegan meat.

But humans are creatures of habit, which is something a successful vegan meat brand understands. It’s why brands like Impossible Foods and Beyond Meat have seen huge success in the U.S., and Quorn in the UK, because their products perfectly mimic the real thing. It’s also why Alpha Foods received $7 million last year to expand its range and distribution of plant-based nuggets, burritos, pizzas, burgers, crumbles, and more. More recently, it raised $28 million in a funding round led by AccelFoods.

Alpha Foods doesn’t want anyone to have to give up pizza night, or microwavable burritos. So it gives the same foods in the same format, but with better, healthier, and more sustainable ingredients.

Wallis told Food Navigator last year, after raising $7 million, “it feels like we’ve reached a tipping point.” He said that 2019 was the perfect moment in time for Alpha Foods to expand. Because, ultimately, people everywhere are now ready to try vegan food.

“With flexitarian diets increasing in popularity, the market is proving that vegans are no longer the main consumer of plant-based protein alternatives,” Wallis told LIVEKINDLY. “What’s amazing about this is the more widely plant-based options are shared and consumed, the more benefit our planet and our four-legged friends will receive.” 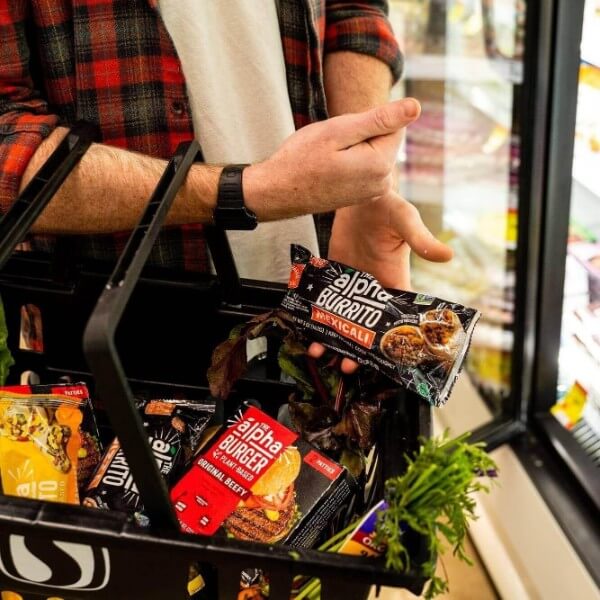 In the U.S., a study recently revealed that 80 percent of Americans want to swap meat for vegan food. It also found that nearly half (48 percent) of those who buy vegan meat don’t do it because they themselves are vegan or vegetarian, or because they’re buying for someone who is.

They do it because they perceive it to be more environmentally-friendly, or healthier. Wallis added, “Alpha Foods makes this choice easier than ever by creating plant-based meals that don’t sacrifice on taste or texture.”

Wallis co-founded Alpha Foods back in 2015 with Cole Orobetz, an entrepreneur who, at the age of 18, founded a recycled plastic lumber fabrication and sales company. Orobetz is a meat-eater but has slowly changed his diet to include more plant-based foods. His health, he discovered, has improved as a result.

“I started to move away from red meats to lighter types of meat products, such as chicken and fish, and ultimately to plant-based products more often,” he told Green Queen last year. “Out of all the recommendations I was given to consider in terms of everyday lifestyle changes to make, reducing red meat consumption was the number one most impactful thing. I felt better.”

According to Orobetz, there are three different types of consumers for Alpha Foods. There’s the classic millennial, who wants something quick and easy when they’re on the go. Then there’s the primary caregiver who just wants something easy and healthy to feed the family. And, finally, there’s the traditional vegan consumer, looking to try something new.

“There is a massive opportunity in the freezer aisle for convenient and comforting plant-based products,” says Wallis. “This is great news for the plant-based community, or anyone wanting to try plant-based because there will be more options!” 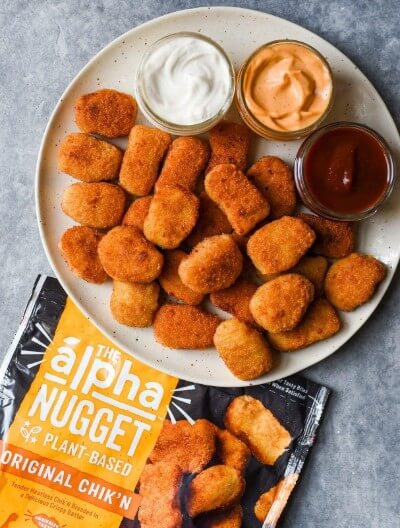 Alpha Foods’ products include the Alpha Nugget. It is made with non-GMO soy protein, but it’s just as meaty as its chicken equivalent. So you won’t miss that satisfying texture when you bite into it. For when you’re on the go, the brand has a range of burritos to choose from, including Chik’n Fajita, Mexicali, Philly, and Pizza.

The brand also offers pizzas, pot pies, tamales, crumbles, and burgers. If you crave it, it’s likely the chances are Alpha Foods offers it. Or the company is working on being able to offer it in the future. More plant-based fish, chicken, and pork products could be on the horizon, too. New breakfast burritos are confirmed for later this year.

“At the forefront of everything we do, our community is an integral part of our brand,” Wallis told LIVEKINDLY. “This includes having an ear to the pulse and being consistently tuned into our fans–we’ve made ingredient changes and reformulations to remove palm oil from our products to address issues we were learning about in real-time along with our conscious consumers.”

“Additionally, to meet the growing needs of fulfilling more plant-based breakfast options (they speak, we listen!). We are launching a delicious line of breakfast burritos later this year.” 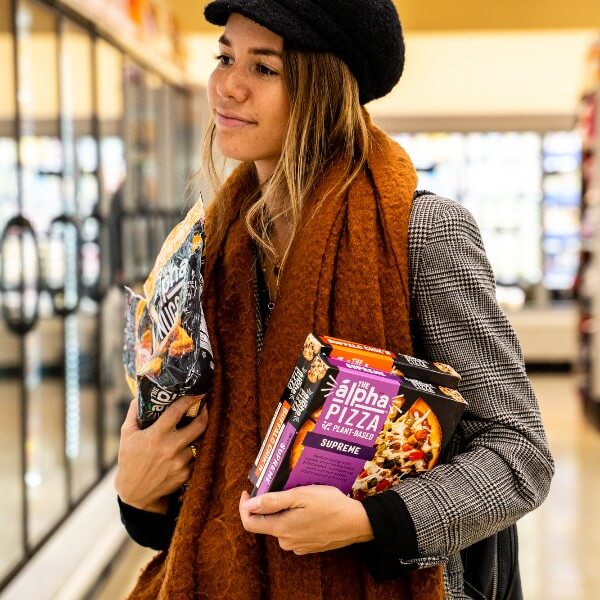 Alpha Foods is available in stores across the U.S.

Alpha Foods’ products are available across the United States in a number of retailers, including Walmart, Wegmans, and Kroger. Recently, the brand also expanded into Asia, launching its Chik’n Nuggets as Happy Nuggets in Green Common stores.