Recent months have witnessed the explosion of plant-made meats, an exciting change of course which, I believe, will steer many a skeptic in the cruelty-free direction. And with the facts, from a personal, agricultural, and overall environmental standpoint, slowly but surely coming to the fore, it’s the only way to go.

Indeed, after taste-testing two of the most hotly talked about commercially available vegan burgers on the block, I can confirm (with raucous enthusiasm!), that both are equally sensational. In fact, they’re so scrumptious, the carnivores I convinced to give them a shot could not believe they were dealing with a “replacement”!

Good news all-round then! Therefore, not to dampen ANYONE’S passion for plants – whether just kindled or burning steady! – this review is not a comparison as such. It’s simply a shout-out to yumminess, and celebration of the reality that light is now finally beginning to stream in at the end of the veggie tunnel.
So here’s the lowdown on each, plus the “where” and “when” deets so you can find them ASAP…we don’t want anyone getting lost – ever again!

How Plant-Based Patties Are Securing A Meat-Free Future

Let’s face it folks, the hype around this burger has been just as REAL as the lack of animal protein that it contains.

Since its October 2016 release here in L.A., I’ve been dying to check it out. So, when the opportunity to pop into Crossroads Kitchen arose just a couple of weeks ago, I jumped at the chance – an outing that my taste buds, and the meat-loving friend I took along for the ride, are still thanking me for!

Prepared in the entirely plant-based kitchen of Tal Ronnen, the restaurant’s founder and author of the New York Times Bestseller The Conscious Cook, we were given 2 options for trying it out. The first…regular cheeseburger style straight from the menu, that’s assembled with the usual lettuce, tomato, onion and pickle fixings, and the second…their daily special consisting of mushrooms, provolone and crispy shallots. 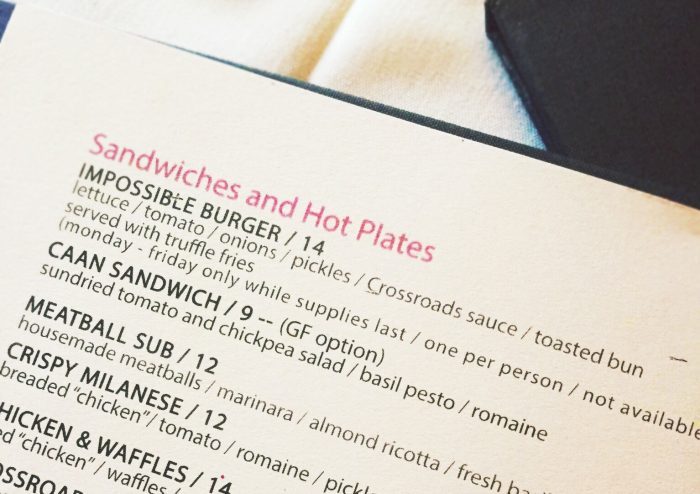 Being both great choices, both were ordered and both were thankfully served with a nice portion of crispy truffle fries…but as the grass is always greener on the other side, we just about managed to amicably agree on a 50/50 split of the luscious meatless booty placed before us. And luscious it was! 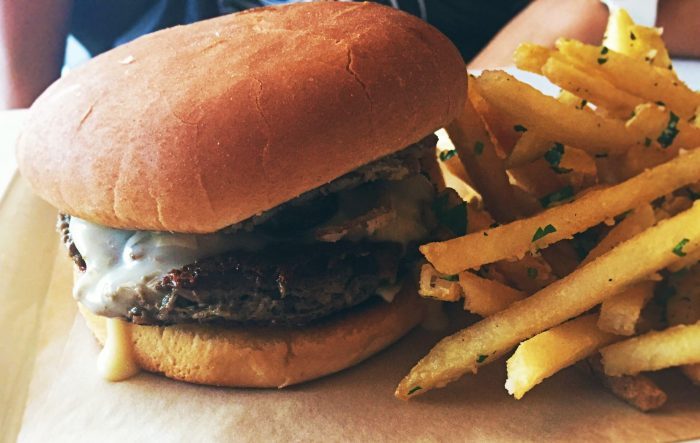 With each encased in a delicious lightly-toasted bun, their mouthwatering fillings were easily outshone by the center-stage contents, proving, straight off the bat, that these delectable pairings were not in any way to camouflage the absence of animal flesh, but were simply the added delights they’re intended only to be.

Corroborating this, my carnivorous companion, in awe of its replicate meat texture and medium-rare “bleed” (courtesy of the wondrous plant-extracted heme!), said she would be none the wiser about its earthy origins had I not been so honest. Of course, I would love to have had more fun with this, but as she threatened to get a salad on the way in, I had to come clean!

Now, is it possibly the best burger we’ve ever had? I would say yes, it’s definitely up there. For me, it shares joint place only with the purveyors of the vegan patty that’s next up, and for her, although not ready to drop beef et. al just yet, she found it a totally on-par alternative – YAY!

So, at $14 a pop, I think you can’t afford NOT to try it whatever your dietary leanings. Certainly, its price point is nothing you wouldn’t pay in a typical gourmet burger joint these days. But don’t forget, in this case you’re also getting a ton more added value in terms of it having zero cholesterol, hormones, antibiotics, or any artificial ingredients. The only thing that will be problematic for some is that as they include wheat protein, they’re not actually gluten free. 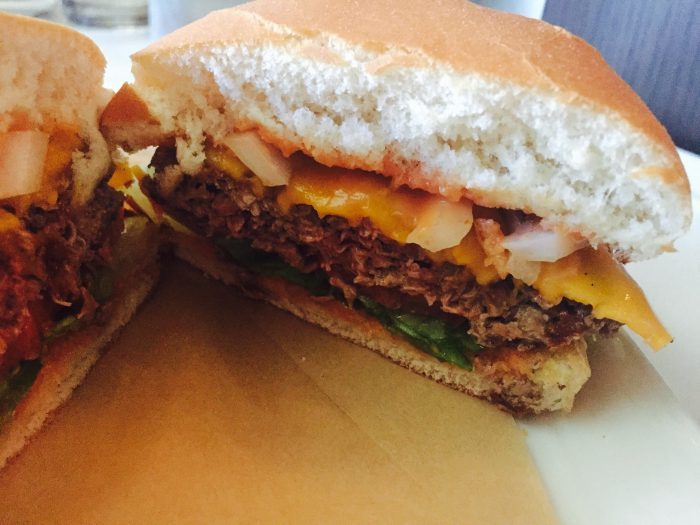 But if that’s not an issue, definitely get yourself to one of the 20 establishments now dishing up this little gem. While they’re not available in grocery stores or online, and locations are limited to Los Angeles, Las Vegas, New York and Northern California for the time being, their new Oakland production facility will hopefully take care of this dispiriting shortage so we can lessen the carbon footprint trying to get a hold of one! But, when “compared to cows, [as] the Impossible Burger uses 95% less land, 74% less water, and creates 87% less greenhouse gas emissions,” I think this is pretty decent enough compensation to begin with! So, go forth and enjoy!

Now, to infinity and beyond – which is exactly where this next burger aims to go! And, actually, it almost already has, being recently launched in Hong Kong. While only available in select stores over there at the minute (this is the company’s first international foray), back in the U.S. the guys at Beyond Meat have gone out of their way to make sure you won’t be going hungry anytime soon. So, on the off-chance you can’t get to any of the Impossible Burger spots, these little boxes of yum can now be found in 11,000+ stores nationwide. Awesome stuff right? But what’s also exciting is the price tag, with the 2-pack featured below coming in at a very reasonable $5.99. 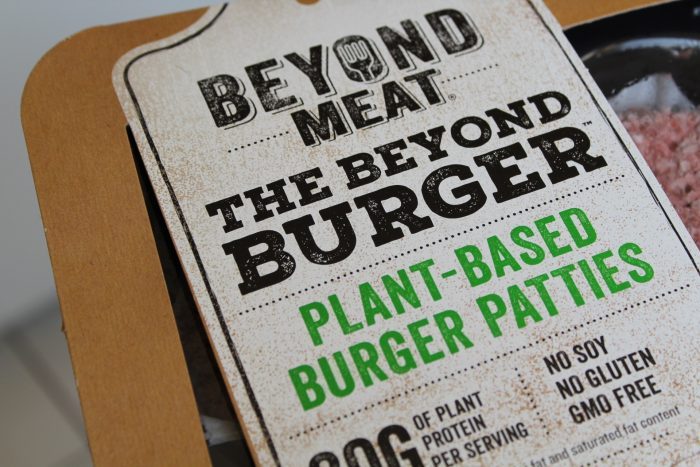 Can’t beat that, I say! Especially when you have the opportunity to tart it up any which way you please, and all in the comfort of your own home. Not that it needs it, it could be served sans bun no problem, but I’ve been having tons of fun with different sides, fillings and, what I like to call, delivery mechanisms. Being baked portobello mushroom in this instance, this is exactly what I dished up to meat-lover mate #2. Served with avocado, spring onion, and Daiya Cheddar Style Cheese, together with roast butternut squash fries and a black bean spinach salad, this time I was ready to see someone get played.

And yes folks, it was that easy! Waiting till the plate was polished, and happy belly rub complete, I gave him the scoop. Stunned he’d NOT eaten meat, and sort of confused about what he really DID have for dinner (heard the legit sizzle on the pan!), the reaction was just priceless – but also well-worth the gamble. Having had numerous variations of it since, he’s now become a part-time carnivore that’s currently in the throes of a transition to plants full-time. High fives! 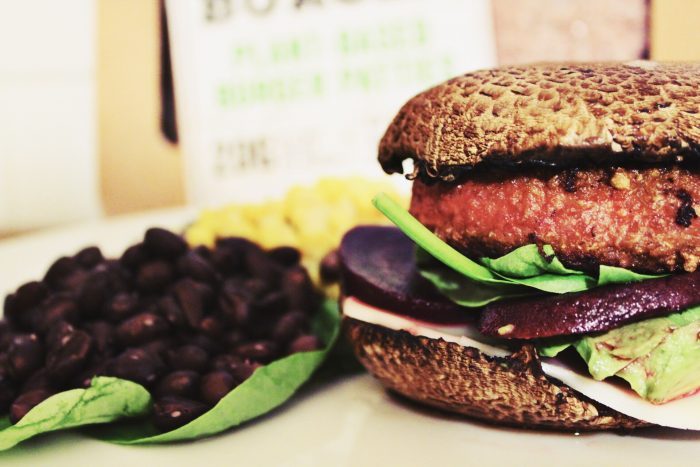 Lastly, in the interests of fairness, a word on this baby’s make-up. The burger is 100% pea protein together with all-natural seasonings, and the company uses “a proprietary system that applies heating, cooling, and pressure to align plant-proteins in the same fibrous structures that you’d find in animal proteins.” Yet, unlike the latter, it’s once again minus all the nasties like cholesterol, hormones and antibiotics just as above. It’s also soy and GMO free, with the added bonus, in this instance, of being gluten free too. Therefore, no reason to further delay…time to get these very good “bad boys” on the grill! 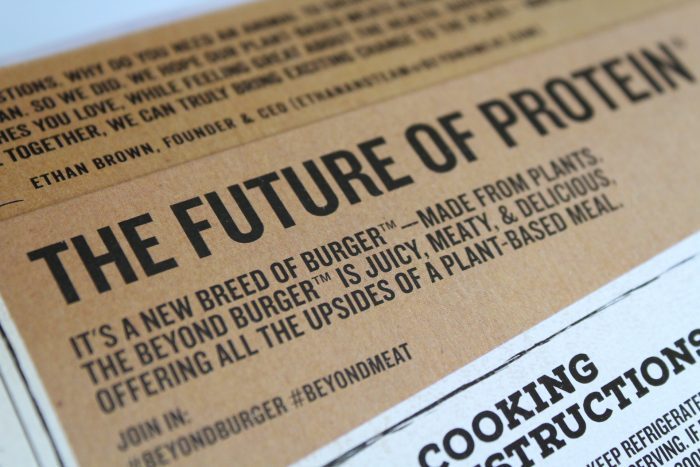 Where? Safeway, Target, Walmart, Whole Foods etc…Click Here For Store Location Details
When? Whenever you like…Head to your local store, and get stocked up!

Bottom Line: Both are all you could ever wish for in a lip-smacking meaty fix…so BUY them..NOW!