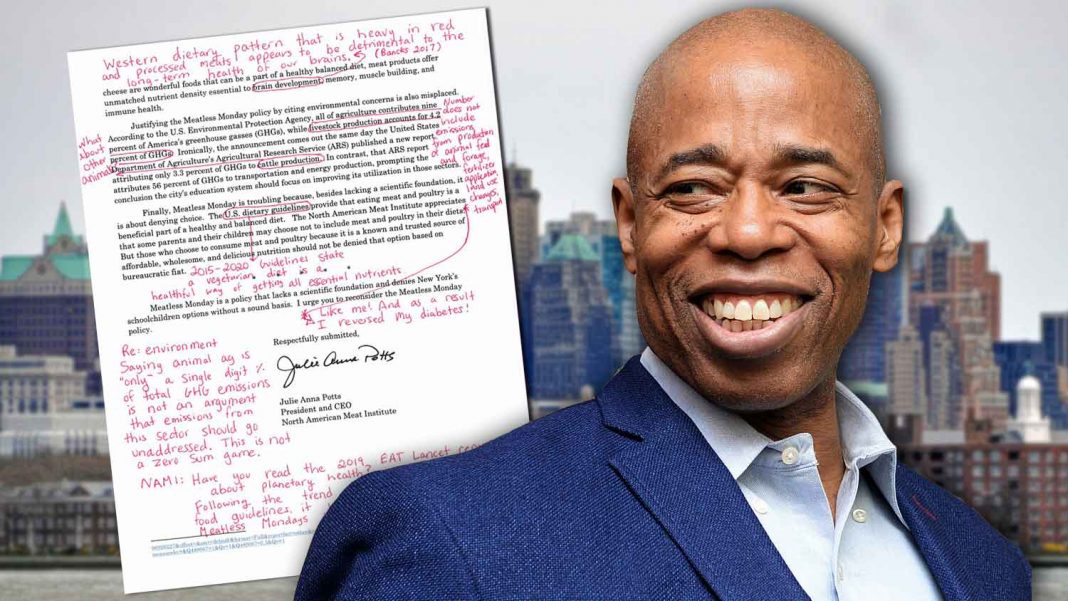 The organization requested that the plan for Meatless Mondays in New York City schools be retracted on the grounds that it “denies New York’s children access to nutritious food.”

Adams shared an annotated version of the letter via Twitter, which Julie Potts — President of NAMI –, sent to Mayor Bill de Blasio.

The Brooklyn Borough President accompanied the images with the commentary, “After reading @MeatInstitute‘s letter to @NYCMayor asking him to retract @NYCSchools #MeatlessMonday, I thought to myself, aren’t there good reasons to reduce one’s meat consumption by 15%? Here are some reasons why: nutrition + climate change. Details in red:”

After reading @MeatInstitute‘s letter to @NYCMayor asking him to retract @NYCSchools #MeatlessMonday, I thought to myself, aren’t there good reasons to reduce one’s meat consumption by 15%? Here are some reasons why: nutrition + climate change. Details in red: pic.twitter.com/QtROVDZ0Lk

Adams’ responded by correcting NAMI’s letter with his notes in red. In response to saying that taking meat off the menu is bad for childrens’ health, he wrote, “Academy of Nutrition and Dietics’ position says appropriately planned vegetarian/vegan meals are adequate and can even prevent some diseases.”

To NAMI’s insistence that livestock production contributes to only 4.2 percent of global greenhouse gas emissions, Adams asked, “Number does not include emissions from production of animal feed and forage, fertilizer application, and…transport.”

Many have praised Adams’ response, though it attracted further criticism from NAMI. The organization’s official Twitter account responded, “point is you’re restricting choice and taking away one that offers substantial nutrition benefits. Shouldn’t be either/or as you suggest. Meat & plants together are a nutrition win.”

The decision — announced by the Mayor alongside Schools Chancellor Chard A. Carranza and Adams himself — will see meat-free meals introduced in public schools across New York for the 2019-2020 academic year.

De Blasio said of the scheme, “cutting back on meat a little will improve New Yorkers’ health and reduce greenhouse gas emissions.” He added, “[w]e’re expanding Meatless Mondays to all public schools to keep our lunch and planet green for generations to come.”

Adams turned to his vegan diet after learning he suffered from type-2 Diabetes. Adams suffered from nerve damage in his hands and feet, as well as losing his eyesight.

Rather than turn to medication to reverse his condition, Adams began to look at the dietary factors that contributed to the problem after reading “The Forks Over Knives Plan.”

He admitted in a film titled “Reversing Diabetes With a Plant-Based, Vegan Diet,” which was produced by Forks Over Knives, that he relied on donuts and meat-heavy late-night convenience foods to power him through his day.

It didn’t take long for Adams to feel the positive effects of the dietary changes. He told the New York Times he “discovered the human palate is amazingly adaptable, and after two weeks without salt or sugar, I no longer craved them.”

The Borough President and upcoming mayoral candidate is now a passionate advocate for plant-based living, and encourages other Americans to make similar changes to their diets.

The Mayor has not responded publicly to NAMI’s letter at this stage.