(Updated May 26, 2019). Pret a Manger will turn nearly 100 stores vegetarian as part of its plan to expand its vegan-friendly chain Veggie Pret.

The already veggie-focused chain is currently “closing in on a deal” to buy the majority of rival sandwich chain Eat’s 94 shops, per the Evening Standard.

Eat has faced financial trouble in recent years and the brand is looking to offload the business. Sources close to Pret say the company wants to turn Eat locations into Veggie Prets in a bid to appeal to health-conscious consumers. There are currently four Veggie Pret locations in the UK, three in London and one in Manchester.

“Veggie Pret is still growing and the future is looking as green as ever. We want customers to keep telling us what they think – and where they’d like to see Veggie Pret next,” Hannah Dolan, head of food development for the chain, said last September. 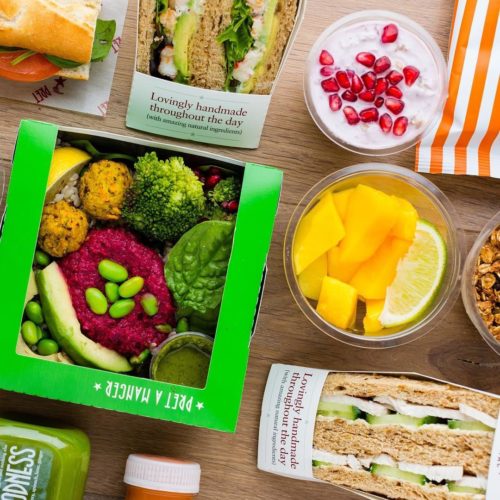 Pret responded to The Guardian with the following statement: “We never comment on rumour or speculation.”

Peter Backman, an independent restaurant consultant, told the publication that the rumored acquisition would allow Pret to safely experiment with reaching new veg-curious customers — the majority of Eat’s stores are centered in London but it also has outlets in key towns and cities throughout the nation like Birmingham and Manchester as well as airport locations. The move would also eliminate one of Pret’s rival chains.

The rumor of Veggie Pret’s expansion comes during a vegan food boom in the UK. A study from global data firm Mintel shows that the nation introduced more plant-based food products than any other nation last year, representing one in six new launches. It noted that more consumers are taking a flexitarian approach — or eating a few vegan meals a week — motivated by health and concern for the environment.

Supermarket chains such as Tesco, Waitrose, and Sainsbury’s account for the majority of launches with own-brand vegan products as well as Veggie Pret’s specialty, grab-and-go lunch items.

“Additional space is also being freed up by UK supermarkets in the on-the-go aisles and small format stores to help promote vegan food and drink, making it easier for meat-eating consumers to try these new concepts out,” said Edward Bergen, global food and drinks analyst at Mintel.

It’s not yet known when the deal between Pret and Eat will move forward.