EAT owned a total of 94 locations across the UK. Pret said it would begin converting “as many as possible” in an attempt to meet the growing demand for more vegan options.

“The purpose of this deal is to serve a growing demand of vegetarians and vegan customers who want delicious, high-quality food and drink options,” Pret CEO Clive Schlee said in a statement.

Veggie Pret’s plant-based menu options include a large selection of sandwiches and wraps— including the Falafel & Hummus, Harissa Carrot & Hummus, and  Avo, Olives, & Toms—salads, and other snacks like the vegan Dark Chocolate and Almond Butter Cookie and the Moroccan Hummus Pot. 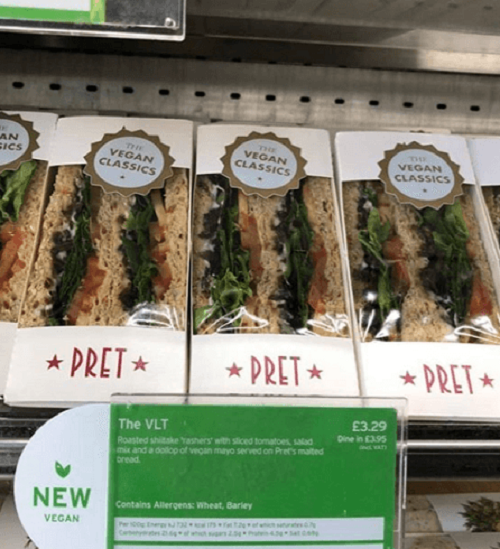 Plant-Based Dining Surges in Popularity in 2020

Pret’s foray into offering plant-based dining options comes on the heels of the growing trend of vegan fast food options.

“Our new range is big on vegan food and veg. There’s a real emphasis on that because that’s what customers want,” said Hannah Dolan, Pret’s head of food development.

Pret a Manger opened its first Veggie Pret outlet in London in 2016.