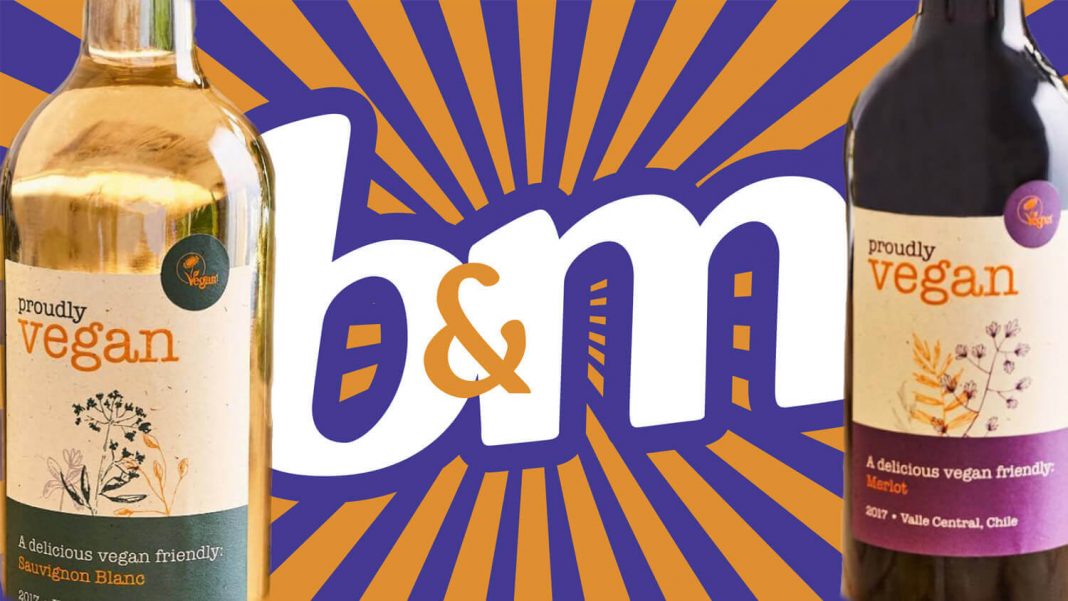 Leading variety retailer B&M is now stocking Proudly Vegan wine. The find was spotted by the Instagram account accidentallyveganUK, which shared a snapshot of two bottles on social.

Both wines are made by the company Broadland Wineries, which launched its Proudly Vegan wine in three varieties merlot, sauvignon blanc, and rosé – last March. According to the brand, everything about the wine is vegan, including the ink and glue on the label. All wines are sourced from Chile’s Valle Central.

B&M appears to stock the merlot and sauvignon blanc. The former is described as having “fruit flavours of cherry and plum intertwined with sumptuous aromas of coffee and chocolate” that pairs well with pasta with tomato sauce and vegetables. The latter, which has “zesty and refreshing” tropical fruit flavors, is recommended with dairy-free risotto, roast cauliflower, and mushrooms.

Why Is Wine Not Vegan?

Although wine is made from grapes, the traditional wine-making process is not vegan. The filtration process – called fining – often makes use of animal-derived ingredients such as isinglass (the dried swim bladder of a fish) or even egg whites and milk.

Broadland launched its Proudly Vegan line to cater to the growing demand among consumers, which is on the rise this year, according to Bloomberg.

“We wanted vegans to be able to buy great tasting wine with the confidence that every element is 100% vegan,” Broadland’s Master of Wine, Dr. Arabella Woodrow, told Drinks Retailing News last March.

Organic South African winery Org de Rac removed animal products from the fining process last July, citing the “enormous rise in veganism as a way of life.” Vegan labeling on wine is also becoming more commonplace as companies recognize that it is a selling point for consumers and even vineyards in New Zealand’s iconic wine region are doing away with isinglass.

An organic, biodynamic vegan wine and record shop opened in Essex last December. Called Winyl, it boasts one of the largest vegan wine selections in the UK. “So we did our research and went to events like the wine fair in London and discovered there is a huge market for vegan and organic wines,” co-founder Whilmari Swift told the Harwich and Manningtree Standard.

Proudly Vegan Wine is available in stores at B&M and Ocado.